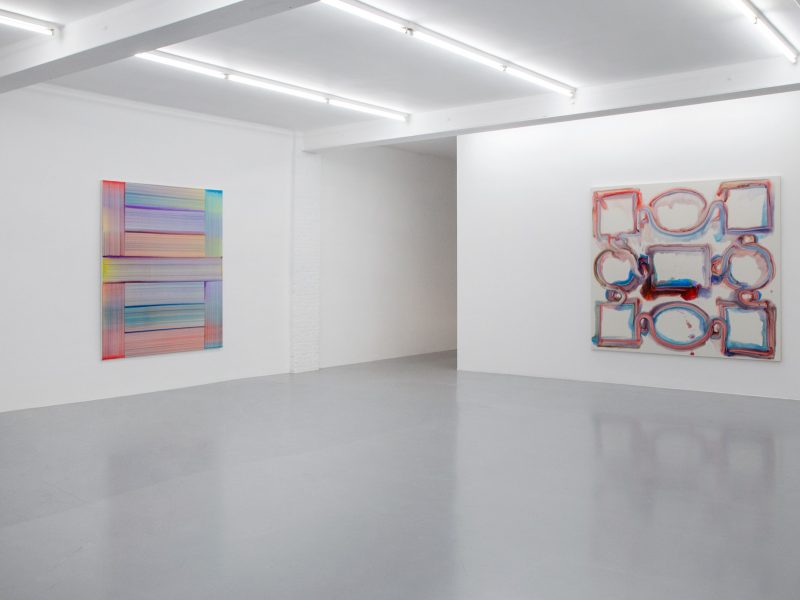 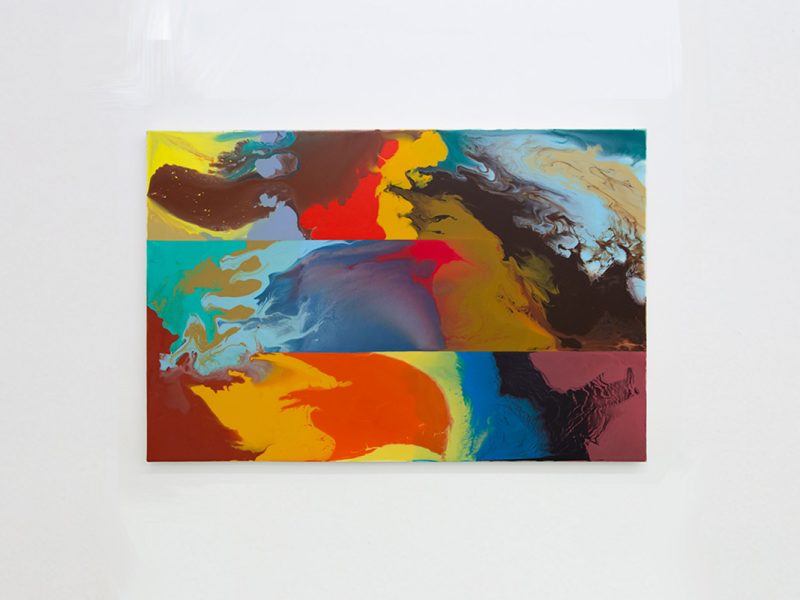 Near the end of the 1970s Bernard Frize decided to devote himself to painting. Any other decisions he left in large part to the idiosyncrasies of the medium. Already with his early work Frize burst the cult of the artist as a creator. In his view, the artist is not above anyone else: he is merely a ‘labourer’ who produces paintings. Frize bought template rolls with figurative shapes he applied on the canvas. With the smallest brush he could find, he patiently filled in a canvas measuring one square metre with short brushstrokes. Frize’s painting is based on technique and movement. He does not believe in personal expression, communicating a message or political statement. He wants the medium itself to speak, to purify painting, to peel painting until only its bare essence is left: paint, tools, the technique of applying paint on the canvas. Simple methods determine the motif or pattern.

Frize’s art is about painting itself, i.e. not about painting as a medium to express feelings or depict fragments of reality. Throughout Frize’s oeuvre, we notice how the artist studies the genesis of the various aspects of the painting. Already in the 1950s the American critic Clement Greenberg stated that the artist should attempt to find the inherent qualities of each medium. In painting this was supposed to be ‘flatness’: the flat character of the support, of the canvas. In the monumental paintings of the abstract expressionists this aspiration culminated into a climax, according to Greenberg. Yet the works of painters like Pollock, Rothko or Newman are not merely about applying colour to the flat support. In their work, these artists want to convey a certain feeling, they try to create some sort of impression. In short: they want to achieve some goal. Unlike them, Frize wants to eradicate every personal decision. When Frize pours paint onto the canvas, he has not reflected in advance about the result. Unlike the abstract expressionists, too, he does not choose deliberate combinations of colours and he declines to use meticulous ‘drippings’ or a handwriting based on a calculated abstraction. For every series of paintings, Frize uses a different technique. For Frize, painting is not a ‘medium’ to express something. The painting paints itself.

In that sense it could be argued that Frize’s paintings are ready-mades. The works are pre-existent in the paint and the support; the artist merely has to use certain tools to transfer them to the canvas. Early in the twentieth century Marcel Duchamp concluded that contemporary painting involved ever less ‘skill’ and ‘craft’. According to Duchamp, since paint is sold in ready-for-use tubes, painting has become a sort of ready-made: ‘Let’s say you use a tube of paint; you didn’t make it. You bought it and used it as a ready-made. Even if you mix two vermilions together, it’s still a mixing of two ready-mades. So man can never expect to start from scratch; he must start from ready-made things like even his own mother and father.’ The essence of art is the instant of deciding or the idea, not representation or form. Nothing prevents the artist to focus solely on existing things. In that sense art is accessible to the public, if it can recreate the original idea, discover the logic of the work, as in the case of Duchamp’s Fountain or Bicycle Wheel, which the public recognizes at once. Similarly, Frize wants the public to be able to deduce every choice the artist makes from the work of art: ‘Every decision of the artist, the public must be able to infer from the painting. The public must be able to find out how the painting has been made, as if it had painted the work itself. ‘What I appreciate in good paintings, is that they look so simple.’ It is as if Frize analyses the system like an expert, as if he does not use existing letters to create (new) words, but simply shows us parts of the alphabet – as we already know. it.

With regard to the visual and stylistic aspects Frize’s work could be divided in series; in each of these a certain technique or process functions as a point of departure. Yet, all works result from the same method, which must result in a continuation of the art of painting. In that sense the works do not make up series. All paintings fit in a larger framework that can only be properly understood if we understand each work separately. Each painting contains a certain quantity of ‘painting’, relates the tautologic story of its own creation. In this way Frize becomes part of a ‘mechanical’ process, parallel to that which Duchamp related to in his critique of the so-called industrial character of contemporary painting. Frize’s paintings are devoid of composition, of a dialectic dialogue between foreground and background, of tension, of a pictorial language. Even the fact that we regard his work as abstract, is of no importance.

Frize expects the public to contribute actively to his paintings, because our eyes not merely record or ‘see’ things when we look at the painting: at the same time we try to discover something, we search for causality and we try to deduce consequences. Reasoning logically, tracing the stream of paint, trying to read the combinations of colours, the public is able – without resorting to any frame of reference – to deduce directly how the work was created. As Frize puts it: ‘A painting must bear witness to a certain intelligence. It is the result of a certain logic that causes us to look twice at the canvas.’ When the public attempts to reconstruct the process of the creation of the work, it will notice that quite often the work is more complex than one would think at first sight. Most paintings were created horizontally, lying on a table. This allows Frize to approach the canvas from all sides, to let the brush rest on the work, to pass it on, without too many personal gestures or brushstrokes. From some motifs it is obvious that they could not have been achieved without assistance. Often more than two hands are necessary to pass on brushes, to create intersections and overlaps of strips of colour. Thus recent works with herringbone patterns result from a meticulously orchestrated choreography of several hands. For the painter the surface of the painting is like an ‘arena of actions’. By applying a glossy layer of resin on the canvas, the materiality of the brushstroke vanishes, which causes the paintings to become even more detached.

As the public watches, a fascinating shift occurs. On the one hand, there is merely the mechanism of the work; on the other hand, the public ‘wants’ to see more in the work than the logic it has discovered by looking at the work. Frize creates the painting almost as if he were a machine or as if he were an automatic pilot; at the same time, he takes care that the public cannot fail to notice this. However, the result of this almost mechanical act of painting is not barren or detached – though Frize keeps emphasizing that the works do not represent anything at all. This process results in paintings that are aesthetic objects that can be experienced by the senses, in interesting combinations of colours, fascinating compositions – qualities that are no deliberate part of the process. In other words: the works do not look like the result of an objective process. The paintings become ‘images’: works of art breathing a pictorial tension. As with the ready-mades, the painter is not interested in the outward appearance of the works, yet they are appealing and visually interesting. That may be partly due to the fact that the public longs to see the work of art as the ‘unique result of a creative process that reveals something beyond the process itself.’ What comes to play a part, is the act of looking at and reflecting upon the image. The public understands, but longs for more than the mere grasping of the logic. There simply has to be more. This longing does not belong to the image, but is something the public feels. The public ‘longs’ for mystery. He or she projects his or her urges and then observes it in the painting. The mystery is therefore present indeed.

The significance of Frize’s work results from the tension created by the concurrence of three elements: there is the painting as the record of a painterly method, the painting as a ready-made; there is the result of this method, i.e. the painting as an aesthetic image; finally, there is the painting as the projection of the public’s desire, the painting as a mystery. The right dose of each of these elements cannot be calculated, but resides in the artist’s ability to paint truly mechanically. Perhaps being mechanical in this way is a ‘skill’, yet it is a skill the artist does not experience consciously. Precisely by adopting a sort of detached point of view, one can get a grip on this process. The painting does not tell us literally ‘the work has been created in this particular manner’, but it does so indirectly: through the ‘image’. There is a contradiction between the so called ‘ordinary’ existence of the painting and our sensory experience of it and of the imaginary space it evokes. This shift is inexplicable, but precisely that may account for the power of Frize’s images. Precisely because he declines to play the part of the authentic creator, Frize evokes unique experiences.