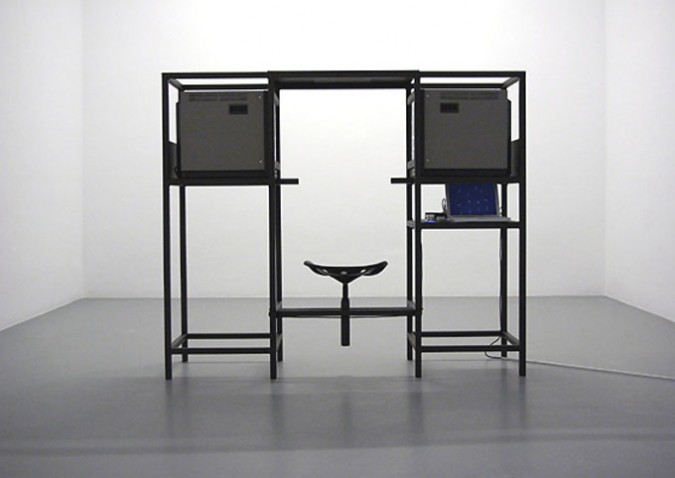 The different objects and installations had been created partly for therapeutic ends, but the underlying idea was to tamper with perception and thereby induce doubts about the very structure of reality. It is this idea that seems to run through all of Carsten Höller’s work, regardless of what form it has taken over the years.

Carsten Höller, a German artist now living in Stockholm, has created something he calls The Laboratory of Doubt. His first experiment with doubt was conducted in Antwerp, Belgium, where he drove around in a car with two loudspeakers on the roof, to spread the message of doubt. But only silence came from the speakers as Carsten Höller, in the middle of the rush hour, drove back and forth along the busiest streets – and stopped every couple of metres, unsure of where to go next.

The idea behind this project, which was documented in a film entitled “One Minute of Doubt”, was precisely to demonstrate a fundamental distrust of the everyday order of things, of the pre-set hierarchies of urban reality. Doubt cutting right through every layer of action and decision. A critical silence.

Later in the same year, 1999, the experiment was continued with other means at the big Sanatorium show at Kunst-Werke, in Berlin. Here, Carsten Höller had devised a large number of machines and instruments to measure and manipulate mental states: a merry-go round that turned so slowly that the viewer could barely tell if it was moving or not; an enormous meditational floating tank in the shape of a swimming pool filled with highly concentrated salt water, in which the visitor could float naked and so experience the suspension of gravity; an ivory-coloured synthetic sphere, into which a single person could fit, and which then rolled down a slope. The different objects and installations had been created partly for therapeutic ends, but the underlying idea was to tamper with perception and thereby induce doubts about the very structure of reality. It is this idea that seems to run through all of Carsten Höller’s work, regardless of what form it has taken over the years. There is a direct link here to Situationism’s notion of hidden revolutionary states in everyday existence.

Carsten Höller was born in Brussels in 1961. From his early work, such as the 1988 “Warnweste” – which involved the sale of German construction workers’ safety jackets – to the 2001 “Boudewijn/Baudouin” performance project – in which 100 participants stepped out of their normal roles and identities for 24 hours – Höller has used various ingenious methods to create a productive uncertainty in the relationship between the work and the viewer. This also applies to his participation at Documenta X in Kassel, in 1997, where his installation (a collaboration with German artist Rosemarie Trockel) showed pigs in a pigsty. Scientific models, psychological manipulation, serious games.

One of Carsten Höller’s most recent works, “Light Wall” from 2000, consists of a wall with thousands of light bulbs. These are switched on and off according to a precise rhythm, with a hallucinatory effect on the viewer (partly due to the fact that the flashing rhythm is set to alternate immediately above and immediately below the epilepsy-triggering frequency of 7.8 Hz). When “Light Wall” was shown at an exhibition at Fondazione Prada in Milan, in 2000, visitors could continue through a ten-metre-long, pitch-black corridor called “Gantenbein Corridor”, which led to a brightly lit room entitled “Upside Down Mushroom Room”. Everything in it hung upside down, with three-metre tall mushrooms rotating on the ceiling. It was as if the visitor had stumbled into Alice’s Wonderland.