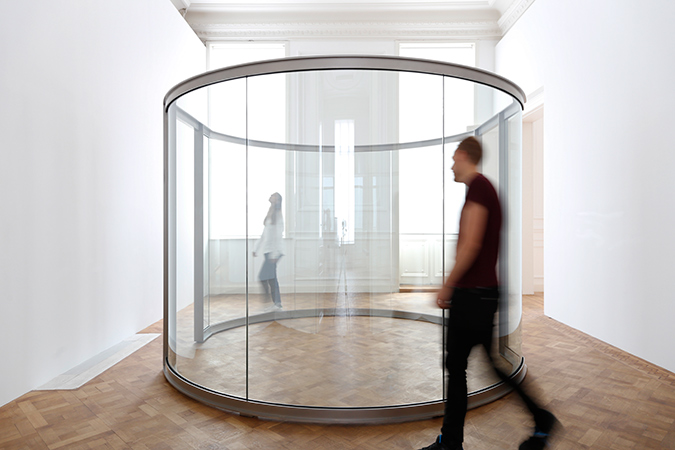 Perched on a platform, Dan Graham latest pavilion is at once elevated above the ground line and cantilevered against the vista of sky and urban horizon. Composed of two-way mirror glass, and hence both translucent and transparent, reflective and opaque, it mediates between the specifics of the site and the broader reaches which it frames in ever-shifting perspectives.

For Dan Graham, the pavilion is at once a sculptural object and a quasi-architectural entity. Its origins lie as much in Minimal art of the sixties, which was often aligned with the purely formal characteristics of the physical contexts in which it was devised and displayed, as in Modernist architectural styles and (earlier) architectural typologies that range from the gazebo to the pergola, from the conservatory to the contemporary atrium. Tellingly, such architecture is public rather than private, involved with leisure and display, and with meditation as well as social interaction.

The outer rectilinear structure of this site-specific sculpture makes reference to the city below: to the grid pattern which determines its topography; to the predominance of modernist and modernist-derived architectural styles in its high-rise architecture; and to its framing of the dual character of urban social experience, of seeing and being seen, of spectatorship and spectacle. [1] Lifted some three feet above the roof these sheltered environs offer unexpected opportunities for panoramic surveillance, yet opportunities in which the viewer never escapes the possibility of being him – or herself the object of perception. Moreover, in Graham’s work, perception always becomes a bodily grounded activity, one in which the viewer cannot escape consciousness of his or her self-image as mirrored in the glass, and hence of his or her agency in the act of vision. Nor can he or she remain unaware of the participatory social character of perception, given the ways in which reflection and refraction project and superimpose, however faintly, the viewer’s own image onto that of others in the pavilion as well as onto the vistas beyond. In these ways Graham’s work speaks as much to a phenomenological as to a psychological reading of the self and its constructions.

The atrium or lobby in the contemporary hotel, corporate headquarters, or even, at times, the modern museum typically posits an arcadian vista which shields the inhabitant from the urban anomie or decay outside. But whereas these utopian arcadia are technological arbors, places for retreat and relaxation as much as social exchange, Graham’s, by contrast, is utterly responsive to the natural world, its powers of reflectivity determined by the motion of clouds and sun rather than by artifice.

The inner cylinder takes its form metaphorically from the bodies of the viewers, as well as, more literally, from the adjacent water tower, a ubiquitous feature of the Manhattan skyline. Graham is keenly aware, too, of the proximity to Battery Park City, also on the Hudson River, whose public art projects were devised for functional as much as decorative ends. But the location has, for him, an additional linkage, namely to certain “cutting edge” alternative venues like The Kitchen, for like them, his structure is intended to be used also for dance, music, and other types of performance events. Consequently, he argues, “My two-way mirror pavilions can be seen as microcosms of the city environment as a whole.” [2] Yet, significantly, he brings these ideas together in an abstract and generalized way, one which permits him to incorporate the process of viewing as an integral aspect of the thematic content.

With works of this type, which he has now been making for over a decade, Graham eschews gallery situations in favor of ancillary or hybrid locations that enable him to inflect the activity of viewing in general, and of viewing art in particular, and so render its self-questioning and contextually shaped character more evident. “I think my works are partly educational and philosophical and partly aesthetic,” he said recently: they disclose “the necessary social and visual engagement connected with the apprehension of the work of art.” [3]

In this regard they develop certain of his earlier concerns from the 1970s when he was principally preoccupied with performance, video, and film activity. Recalling “the three years it took me to realize this piece, “Graham revealed that” the solution came out of wanting to go back to that period when I was doing films and video. The first film that I made, From Sunrise to Sunset, actually was concerned with the horizon line making a gradual spiral to map the entire length, and so you were at the very top of the sky at sunset and at sunrise…. And for the last film that I did, Body Press, I built a mirrorized cylinder, and I had a man and a woman, each naked, holding a camera against their bodies and making a spiral mapping their bodies…. Also, because it was clearly handled, held in people’s hands, it had that subjective sense of being identified with the performer, so the spectator identified with the performer…. It also picked up all sorts of issues from Godard to Jacques Lacan about the other and the mirror stage.” [4] At once the basis for and correlative of his current activity, video is given a place in this rooftop project in the lounge in which Graham’s own tapes may be viewed in conjunction with those of others. In his videos Graham causes the viewer once again to negotiate the medium through which he or she is experiencing the work, and with that the conditions of spectatorship itself. If participation in the pavilion arises inevitably out of the spectator’s actual behavior, in the case of the videotapes it involves a degree of complicity. In both, however, looking becomes self-evidently a participatory activity, so that whatever the viewer experiences involves recognizing his or her own contribution to that activity.

1. Two-way Mirror Cylinder Inside Cube was created specifically for this site, where it will remain for a period of three years. Thereafter it may be relocated elsewhere, albeit in venues with similar characteristics.
2. notes for Two-Way Mirror Cylinder Inside Cube and a Video Salon, unpublished manuscript, 1991. Graham’s decision to produce a video rather than a printed catalogue to accompany this project, both documenting it and indicating some of its origins, was prompted partly by the links it made to his own videos which will be shown in the video salon.
3. quoted in “Brian Hatton and Dan Graham: A Conversation”, in Dan Graham, Galerie Roger Pailhas, Marseilles, 1991, unpaginated.
4. interview with the author, August 28, 1991.