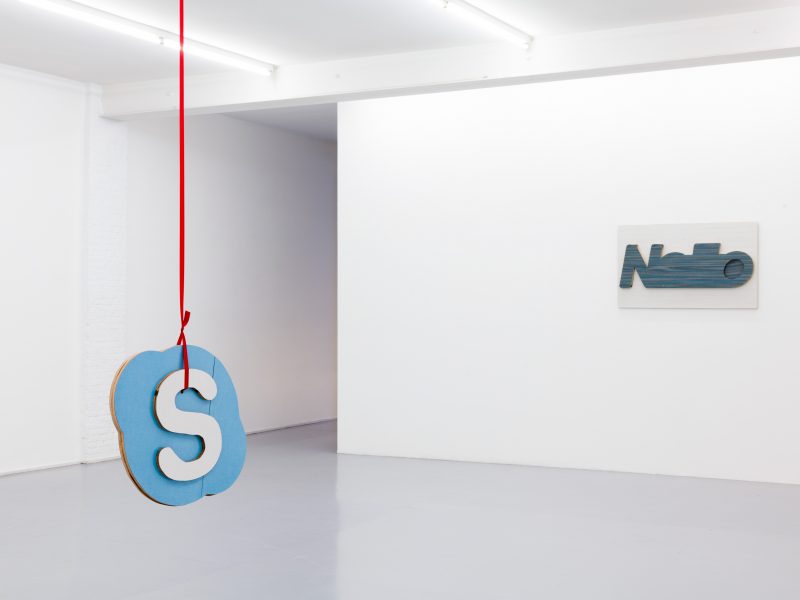 DGT: For starters, I’d like to talk about Charlie Brown.
You created a kind of makeshift peanut-selling stand for Charlie Brown because he suddenly found himself unemployed when the comic Peanuts was discontinued.
To help him out, you came up with a job that corresponded to his professional profile and his experience: the peddling of peanuts.

FC: The stand itself was bought from a street peddler in the Metro. The news of the discontinuation of the comic Peanuts made me think right away about the unemployment of the characters. The day I found out, the issue of unemployment obsessed me all day long and that evening in the Metro, I came across an idea for a new job for Charlie Brown. Mediatized information, which dealt with an imaginary reality couldn’t simply submit to the cessation of the author, so it seemed to me logical that the collective imagination should come to the characters of Peanut’s aid.

FC: Charlie Brown lives in a mini-society, among his friends, his school, and his family. A triad which we can all relate to, school changing into the professional world once we become adults. The milieu of art, whose motives I sometimes have a hard time reading, is like school when I was a child. Prada has replaced Kickers and the highest price has replaced the highest points, and it all functions in this informal way, for better or for worse, from whence this ‘Charliebrownesque’ feeling.

DGT: It seems to me that in your identification with Charlie Brown there exists an ironic allusion to the situation of the artist, to his place reserved for him by society and the institution?

FC: That which links the artist and Charlie Brown is without a doubt his ‘stupefied’ side, and also the idea that he seems familiar to people he doesn’t know. The institution organizes exhibitions at several levels: in certain cases, the artist, the public and the museum all meet together, in other cases, the artist is a cultural impresario and subject to the funds allocated to him by the museum’s programming. A docility shared and implicitly understood by all parties involved. This feeling is realist in the sense where society is subject to the same model, today we are far from the white cube as a laboratory of the real. The social phenomenon, which consists of being an artist because it’s ‘cool’ in my opinion comes from the illusion that one can be an artist with a minimum of means. In a period when employment is undergoing a crisis, this apparent facility places the artist, with the plenitude of support at his disposal, in the role of a job-making acrobat.

DGT: You have said that Charlie Brown brings together reality and fiction. I find that, in a lot of your work— I am thinking of Moonwalk and also of Standby—, one witnesses a certain intrusion by the imagination into the real or vice-versa.

FC: Inserting the imaginary in material and tangible propositions functions for me like a kind of bait and a “Virus by conviction” in strict reality. It’s a kind of “blind test” for imaginary propositions, which confront parts of the real in the same organism. Once the object is made and seen, a sort of ricochet takes place in the reception of that object. If the referents of the real stricto sensu do not repress its fictional character, then a micro-jurisprudence occurs within the reading of the fragments of the legitimate model.

DGT: In the same respect, I have often considered the assimilation of art to be like a virus. As soon as we consider any given object, investing it with a discursive importance and a content that transcends its apparent utility, reality undergoes an inflection, which can, in disrupting the causal relation of the real and replacing it with a more critical perspective, act as a virus on the imagination. On Spanish television there was a news announcer who ended each broadcast with the same phrase: “That’s the way things are and that’s how we tell it.” In my opinion, artistic practices at once address the problem of the impossibility of believing something and as well as being the source of a critical and non-conformist way of thinking vis-à-vis reality. This is how, I believe, the engagement of art manifests itself.

FC: The condition of an art engagé is but the response of an attentive listening to the real.

DGT: I remember a scene from the film The Russia House in which Sean Connery played the role of an editor and an amateur jazz musician in his spare time. A CIA agent asked him if he knew any jazz musicians who were communists. Sean Connery made a visible effort and finally gave up a name: that of the only musician he had ever known who was not an anarchist. I think one can say as much for artists.

FC: Musicians in a group have a status as independent and singular as parts in a machine, among which the entirety of the work is evenly distributed. Punk imparted important ideas to the present generation in the form of “merchandising”; all the signs cohabitate in systems of antagonistic thinking with the greatest courtesy and are supported by a cynicism of survival. The perspective of a horizontal organization is important but the hierarchical “feedback”* persists.

DGT: This attentive listening to reality, such as you mention it, seems to me linked to a doubting of social, cultural, or political reality, which is the domain of an irreducible and non-conformist way of thinking distinct to art.

FC: The real can listen to itself, either in differed situations or with headphones. The real’s constituents remain perceptible and therefore interfere with the responses that it provokes. The kind of anti-conformist thinking that you are talking about is a series of sequences detached and put into relief against the general composition. Perhaps art is the “jog-shuttle”* of the real.

DGT: To finish, I would like you to talk to me a little about the genesis of SMS (of which we reproduce a good part of here).

FC: One day I realized that with my cell phone I had a little writing and distribution machine in my pocket. From that moment on, I spontaneously typed in impressions, “jokes,” and commentaries that I would then send to several contacts in my address book. Rather than noting down these ideas, I broadcasted them via SMS directly to people I knew. A good number of my recipients, who had subscribed without even knowing it, were quite amused, while others, annoyed, unsubscribed themselves. I didn’t save any of the messages I sent, but three or four of my recipients archived everything I sent them and later on, I was able to recuperate the two hundred or so which comprise the present edition. This activity manifests itself like a journal of ennui kept in spare time, which is also at once the moment of production, in the sense of a photo-souvenir. Contrary to the “short message service,” which comes without warning, the printed version spares the reader the sudden shock of ringing or buzzing. A project such as Moonwalk, which is reproduced in this book, could have been the subject of a SMS before its realization, but this didn’t happen: the development of projects in the brain being totally unpredictable.

DGT: Thus, the SMS’s were therefore involuntarily transformed into a kind of notebook of ideas?

FC: Yes, just like that, a sort of underground source that irrigates my every day life. Eight years ago, I submitted a brand to the office of “trademarks” in La Haye, which was “peopleday®”, but was entitled, “Spécialité Générale” (General Specialty), without a juridical structure to go with it, only this name that floats like a phantom. My intention was to be able to certify the periphery of my production as definitively artistic and therefore consciously recycle the cast-off of my every day life. The fact of setting up a continuous purview of activity immediately generates another peripheral zone of production in the spirit of Russian dolls, which renders the idea of indexing them all absurd. It’s the gesture that matters and the SMS is a gesture.