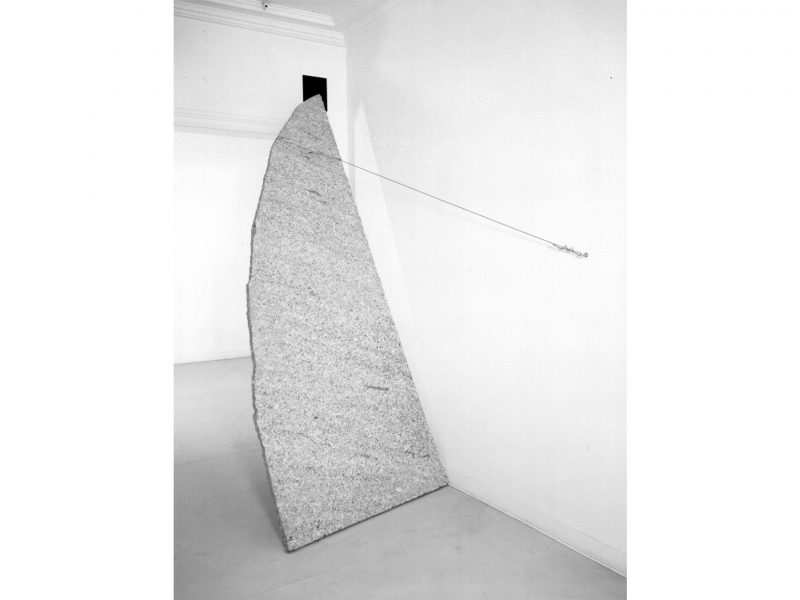 Timothy J. Clark proposes that Modernism had two great aims: to lead its audiences towards recognition of the social reality of the sign and, equally, to dream “of turning the sign back to a bedrock of World / Nature / Sensation / Subjectivity which the to and for of capitalism had all but destroyed”. Somewhere in Arte Povera – often recognized as being concerned only by material, now generally agreed to be equally preoccupied by language – is work that is up to the challenge.

You know Anselmo’s icons I suppose: the perspex sheet the height of a person, held tensioned by a stiff iron wire; the iron rod the height of a person, fixed in a block of hardwood, faintly wavering in registration of your presence; the floppy lettuce supporting the polished granite block, the cotton wool drinking water from a replenishable source. Iconic photographs too: “Into the Work”, the artist running isolated into a horizonless landscape (a tantalising title for anyone seeking to connect all this to parallel endeavours such as Umberto Eco’s “The Open Work”). And in the catalogue the same photo of Anselmo on Stromboli in 1965 – his symbolic inauguration as an artist when his cast shadow disappeared. An entry in a modern Lives of the Saints would record the time he spends on this island volcano (thereby twinning it with Turin’s factories). But the self-mythologizing is not excessive, and it’s easy to get past. Much more significantly, Anselmo’s installation of his works made what in a survey can seem like slide illustrations into living proposals, and this is why the show was superior to Kounellis’s recent exhibition in Oxford, which seemed inclined to accept reliquary status for the early works by mounting them on an inaccessible platform.

Installation has an inevitable and pleasingly open aspect of meaning here. On the upper floor, which is more gothic and churchy, play was made with the building’s axial geometry. The long iron bars squeezed a sea-sponge according to the ambient temperature: Breathing. The single slide projector Invisible – the one where you catch the word VISIBILE – fired at right angles over it, along the longest axis the galleries offer. Multiple projections elsewhere announce PARTICOLARE (detail). The placed granite blocks suggested an order of a different and irregular kind. They indicate movement through and beyond the given architecture. Hence also the presence of the compass, here set in a drift of earth, and the repeated use of ultramarine pigment.

There is a pointing to beyond that serves to reconform your sense of where you stand, what these things are made of and how their separate elements are held in place, whether they are a perfectly installed line of photographs (“Documentation of human interference in universal gravitation”, 1969), or an iron bar held twisted against the wall by a bolt of cloth (“Torsion”, 1968). This is the non-mystical showing forth of reality, facticity, presence that accounts of Arte Povera (and related currents) struggle to define. It is worth struggling with. The stylistic give away is fixing and placing: Anselmo’s cables and slipknots, Robert Ryman’s tacks and screws, Lee Ufan’s placed river boulders and brushstrokes. Anselmo’s work may seem to stand aloof from the social, but real caution is required before that charge is made; his work maybe defending it. This dream of humankind as part of nature isn’t the purchased one of a timeshare in a holiday island, but an opening to a time that is neither leisure nor work.