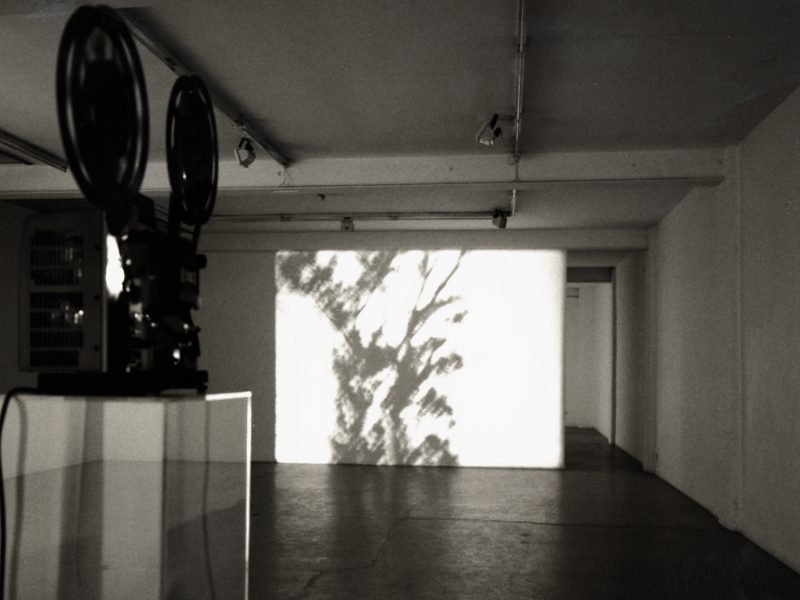 The act of seeing is an act of interpretation: it is at once reflexive and conditioned by the social contract. Both that which is seen (hence, representation) and the act of seeing have long been central preoccupations for Irish artist James Coleman. In the early 1970s he abandoned painting in favor of reproductive media ― film, video, and photography ― and theatre. And though he continues to employ these art forms, photography, in the guise of slide projections, has become his preferred format. Projected Images: 1972-1994 concentrates exclusively on that medium in order to provide an introduction and overview to key issues in Coleman’s oeuvre of the past twenty-odd years. In each work sound and image interface somewhat differently as Coleman explores what has been defined as “the relationship between the identities of the subject and image as they are mutually conditioned or ’caused’ through time.” (1)

Slide-Piece, the earliest work in the exhibition, typifies much in Coleman’s practice at the beginning of the 1970s when his art first matured. It is comprised of an image of an ordinary, even prosaic, urban setting–a square in Milan shot soon after dawn–accompanied by a recorded audio track. An authoritative, equable male voice analyses the scene which is projected on the scale of a large painting or small cinema screen. His elaborate, almost painstaking description of the photograph concludes as the slide changes, to an identical image of the scene accompanied, this time, by a quite differently based analysis intoned, nonetheless, by the same narrator. No single one of the ensuing descriptions takes priority or gains pre-eminence over previous examples. Every point of view was determined by the preoccupations of its individual analyst each of whom Coleman asked to respond objectively to the scene as a purely retinal image. One consequence of their varying responses, the result of differing practices of inclusion and exclusion as well as subjective estimates of significance and value, is that the process of viewing itself becomes the subject of the work; the interpretive responses are the objects of enquiry.

Although this reflexive component continues to inform Coleman’s subsequent work, his focus has widened considerably in recent years to incorporate a concern with the way the subject is de- and reconstructed in the act of viewing. Constant in his evolution is an engagement with the medium itself and with its role in shaping apprehension. (Consequently, there is never an attempt to disguise the mechanisms of projection: the equipment is always straightforwardly presented in the viewer’s space). Charon (MIT Project), in particular, makes this evident since in each of its sequences of fourteen brief, but diverse, episodes, photography is the ostensible subject under review. These succinct, yet pithy, vignettes explore just some of the many roles it plays, and functions it serves in contemporary society. A dispassionate eye. A documentary idiom. An unwavering testament to truth. A fiction and construct pressed into the service of advertising, marketing, or promotion. A primary vehicle in the construction of memory and history. The edges of these typical convictions and certitudes regarding the role and nature of photography are frayed by the conflicting, competing, contrary, and, hence, irreconcilable attitudes encapsulated here. The principal counter to this act of deconstruction resides in the svelte voice of the commentator, whose very reasoned and reasonable tones, akin to those of an earnest sales representative, seem blithely indifferent to the subtle, disintegrative humor with which Coleman has approached this project. As elsewhere in his oeuvre, as Jean Fisher astutely notes, “meaning is to be sought not through mediated, inherited structures of knowledge but through the disjunctions and incongruities we discover in our own enunciations.” (2)

Whether what was actually perceived and what was thought to have been seen can be separated and distinguished is in part the question raised by La Tache Aveugle. This silent work takes as its starting point a half-second segment from James Whales’s 1933 film The Invisible Man. Marking the very moment when the protagonist begins to lose his immunity and is about to become visible once again, this fragment was separated into its individual frames then transferred into a slide projection that by means of a slow dissolve takes several hours to unfold. Through its inexorable unravelling La Tache Aveugle dramatizes ways in which perception and interpretation interconnect, significance is adduced, and seeing is conditioned by the sociocultural nexus.

Background, Lapsus Exposure, and I N I T I A L S, the three most recent works in Coleman’s oeuvre, have been linked retrospectively by the artist into a trilogy. With approximately the same duration and similarly sized casts, all of these narratives may be described at their most immediate visual level as a grouping of figures in preparation for a photo shoot. The accompanying texts, however, manifest an increasing tangentiality to the imagery of protagonists arranging and aligning themselves in readiness for the camera. The three sites in which the tableaus unfold–a palaeontology laboratory, a film and recording studio, and rooms adjacent to the operating theatre in a hospital–tellingly condition and govern interpretation.
For, tabulating, examining, even dissecting, the body as well as the gaze have now assumed seminal importance in this trio of works. (3)

The forms in which each work was realized are indebted to various popular culture genres, including pulp fiction, TV soap operas, and photo romances. They offer a repertoire of familiar idioms, which Coleman mines as deeply as he does certain high-art modes–seventeenth-century Dutch portraiture, or twentieth-century Irish literature, for example–as well as related cinematic conventions. Weaving references drawn from film, from drama, and from painting, Coleman situates his trilogy in a hybrid realm, one that allows him to comment obliquely on these canonical art forms and their traditions without, however, fully subscribing to any.

Presented in darkened rooms with soft, carpeted floors, Coleman’s works refuse to ascribe fixed viewpoints, preferred sight lines or standardized positions. Spectators move through the rooms finding their own preferred vantage points. As they locate themselves temporarily and provisionally, they become aware that they have in large part negotiated the positions they adopt. Simultaneously, as subjects, they undergo a process of decentring. Having implicated viewers into their audio-visual texts by means of shifting perspectives and changing modes of address, these works deconstruct the mechanisms that inform their audiences’ methods of comprehension and apprehension. By thus rendering the ascription of meaning a self-conscious act, Coleman is able to continually readjust his viewers’ relations to reality and to competing modalities of subjectivity.

1. Michael Newman, “Allegories of the Subject: The Theme of Identity in the Work of James Coleman,” James Coleman: Selected Works (Chicago: Renaissance Society and Institute of Contemporary Art, London, 1985), 27
2. Jean Fisher, “Inexorable Dissolve: James Coleman Blindsides Art,” Artforum 32, no. 4 (December 1993), 97
3. Jean Fisher has argued that “…for the Enlightenment, the operating theater, no less than popular theater, was a place where the body as spectacle was laid out for the public gaze, dismembered and investigated, to reveal inner truths of life and death.” Jean Fisher, “On Seeing for Oneself: A Perspective,”Michael Asher/James Coleman (New York: Artists Space, 1988), 21