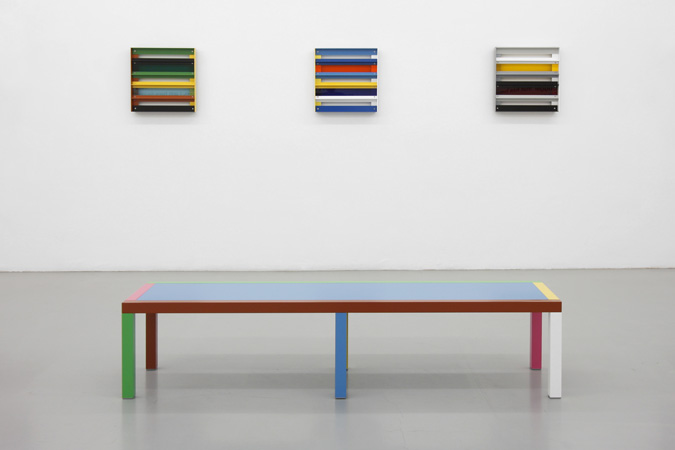 The most striking aspect of Liam Gillick’s “Discussion Island”, 1997, an installation of modular forms, was how liberally he sampled from Minimalism. Gillick’s pristine, freestanding cubes and rectangular boxes, as well as his panels and a lighting grid, all hung high and parallel to the ceiling, instantly recalled Donald Judd’s primary structures. Like many of Judd’s constructions, which play form against function and hinge on a complex relation to sculpture, furniture, and architecture, Gillick’s objects are predicated on conditional or situational factors. Tantamount to “social sculpture”, Gillick’s work organizes space, hence, behavior. It’s not simply a matter of what his art looks like, but rather how the audience sees it, what use we have for it, and what we do in relation to it.

Though in their aspiration to be all things to all viewers Gillick’s objects are tinged with the ideal, it is through their relation to their surroundings that they suggest a potential use value. The aluminum-framed lighting unit was decidedly functional. The suspended Plexiglass panels, not unlike sections of drop ceiling, created attractive pools of diffused, colored light and offer a decorative touch. The boxes, modular units framed in aluminum with Plexi and cardboard sides, suggested an Ikea adaptability. Indeed, one could view the installation as a showroom of modular prototypes, each of which could be customized for individual clients and situations.

For all the “what you see is what you get” simplicity of Gillick’s art, it has a considerable narrative spin. The title of one box, “Assessment Think Tank”, suggested how it should be viewed. Similarly, the suspended ceiling panels were labeled “Conciliation Platform”, and the lighting unit dubbed an “Arrival Rig”. Together these appellations, though they seemingly had little to do with the objects they named, suggested a progressive, rational, open approach to problem-solving. Indeed, the installation’s title, “Discussion Island”, referred to a Celtic myth about an island collectively maintained by various clans as a meeting ground for conflict resolution.

In previous projects Gillick wrote semi-fictional texts that served as the basis for related objects. “Discussion Island” – termed by Gillick “A ‘What If’ Scenario” – represents a reversal of the artist’s working process in that the objects came first. Perhaps this strategy is geared toward achieving greater synthesis between the physical and discursive dimensions of his sculpture. It may also account for Gillick’s adoption of Minimalist-inspired forms equipped with predetermined narrative. To complete “Discussions Island”, Gillick plans to publish a “predictive report” about the project and its installation in different venues. In Gillick’s lingo, he’s providing a “postutopian vision of a future” that, theoretically, his objects attempt to instrumentalize and his texts to elucidate. As the narrative spin accelerates, it becomes evident that Gillick’s smart, sleek forms are anything but resolved. Their self-consciousness is the tautological reflex of much recent conceptually oriented art that derives from an earlier postmodernism – one prone to endgame strategies and, at the same time, fascinated by the spectacle of its own demise. Gillick’s art shows its affinity with ’80s-style appropriation, but seeks no apocalyptic closure.

The “what if” scenario in his work revolves around the potentially limitless capacity of art – or any system – to sustain itself given a set of variables that can adapt to changing conditions. In what amounts to “complex infinity” (think fractal geometry), the system replicates itself, yet each permutation is at once related and distinct. There is no arrival, no projection, no revision that leads to resolution. Whether in the form of a metaphor for art or a “postutopian vision of a future”, Gillick’s “predictive report” may touch on this. It’s at least something to think about while standing under one of his suspended panels.

While Gillick’s streamlined modular units bespeak a world geared to maximum efficiency, micromanagement, mobility, and multifunctionality, they are also objects with great presence. Stripped of all Gillick’s rhetorical circumlocution, his sculptures stand on their own. Although it makes for fascinating reading and may eventually prove relevant in our understanding of art of this period, the hypernarrative behind Gillick’s art is one that fusses over, if not romantically broods on, meaning. Not content to let his sculptures simply be, Gillick intervenes with endless textual rationalizations of form, which is where the enigmatic and overwrought aspects of his art surface. But that is also what distinguishes it and what makes these late twentieth-century permutations of geometric formalism so fascinatingly “postutopian”.