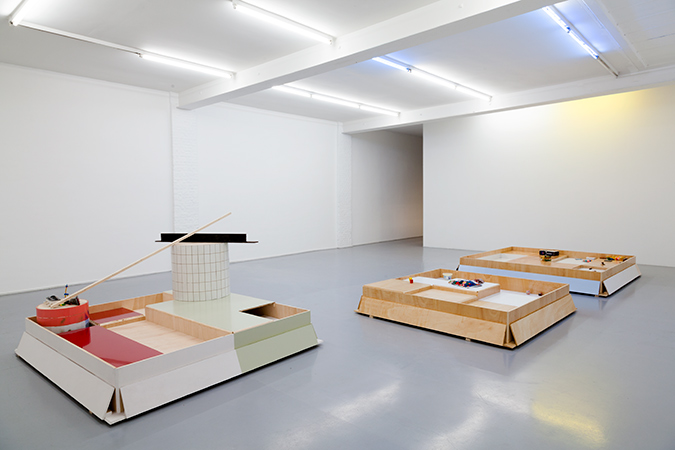 I remember when Manfred Pernice came to visit me shortly after he won the Piepenbrock Prize for Sculpture in 2000.
“I live right above Frau Dieu”, I said with a certain sense of local pride as I gave him directions to my apartment. I wasn’t sure if my neighbour downstairs was French because she was stone deaf, as I had discovered one afternoon after she appeared at my door frantically gesturing what I eventually understood to be a leaking pipe. This discovery led not only to a visit from the plumber but also to an astonishingly simple religious dogma: God was a woman, but she could neither hear our prayers, nor respond to them.

There was another woman living above me. Her name escapes me, but I remember how she would waltz impeccably dressed down the staircase with a smile on her face and a lilt in her greeting, as if every day were a summer holiday, no matter how cloudy and cold. But one afternoon, she too appeared frantic at my door. Her parents were waiting for her at the train station in Dresden, and could I help her? We went to her apartment, and I picked up her address book in the hope of contacting a relative. But its pages turned out to be as empty as her short-term memory, apart from the telephone numbers of a taxi service, a florist and an undertaker.

As Manfred and I sat in my kitchen talking – sandwiched between the Almighty and the Alzheimer’s case – we spoke about this odd configuration of people and places, of life and architecture. Shouldn’t Frau Dieu live on the top floor? “Perhaps Berlin is upside-down,” ventured Manfred. While unrelated, the two elderly women seemed to exist as aging twin allegories of the transformations taking place in the city, which had given up its constancy to become as fleeting as flesh, as transitory as the people who moved through its streets. In the midst of these tumultuous changes – renovating, demolishing, rebuilding the capital of reunited Germany – we sat between two kinds of silences: the silence of a deaf-mute witness and the random silencing of a memory. Unlike the Muses, Graces or Fates whose youthful beauty reflects the eternity of ever-fresh powers, my allegorical neighbours with their halos of grey hair pointed to the eternity of an undied death: hovering as a quiet apparition, still there but not quite.

Manfred’s prize exhibition at the Hamburger Bahnhof was marked by such silenced presences, starting with the sculptures themselves. In Dosentreff (Can meeting), 2000, a group of makeshift wooden canisters stood here and there, more like cocktail tables waiting for the guests to arrive than the guests themselves evoked by the informal get-together in the work’s title. The surrounding walls resembled a bulletin board of memorabilia with odd photographs, clipped newspaper articles, old advertisements and posters for Pernice’s own bygone exhibitions. Some canisters and papers bore identical numbers which matched them together as if they might otherwise lose each other in the crowd. One canister’s number led to an interview on the wall with Hartwig Piepenbrock, who spoke about the relationship between the German-Jewish painter Felix Nussbaum, the East German painter Bernhard Heisig and himself: collector, patron and director of a sanitation and security company.

As Manfred explained while sitting at my kitchen table, the canisters were inspired by real people, both dead and alive, famous and forgettable, who would have otherwise never met in the same room, let alone in a museum exhibition. The can meeting was a kind of historical seance, if not a historical group portrait, made with spare wood instead of painted canvases. There was a canister not only for Piepenbrock and for Heisig (there was none for Nussbaum, who was murdered in Auschwitz), but also for an East German border guard who had been shot by the West Berlin police right near the Hamburger Bahnhof as he tried to prevent a fellow citizen from escaping to the West. Die Neue Zeit report on the incident duly noted the guard’s sensitive nature: he happened to make drawings in his spare time. There were also canisters for a Frankfurter Allgemeine Zeitung art critic, the anonymous members of a Kreuzberg commune and even Manfred’s assistant.

Like many other of his works, Dosentreff would initially appear to be all about memories: saving them in a way that confounds the official gesture of the public monument and the randomness proper to private scraps books or even lists, where one memory connects up with another to make a chain of associations. But the installation was partly inspired by Bert Hellinger’s Familienaufstellungen, which roughly translates as ‘family constellations’: a therapy developed in Germany to help individuals deal with their pasts by having other people act out the roles of their family, members, whether deceased or living. While exploring his own past, Manfred had created a makeshift family linked by German history instead of blood relations. The canisters may have been based on collective historical facts and organized as aides-mémoires: match the number on the can with the number on the wall. Yet they were closer to actors with the curious agency often attributed to ghosts. Like artworks, ghosts live more by apparitions than by actions.

Indeed, as I understood from what Manfred told me, the can meeting was arranged as an informal get-together but also set up as a series of confrontations. The Piepenbrock and Heisig cans were placed more or less in the centre of these confrontations. At an apex between them, one could find the can for the East German border guard, which activates a local history. The can for the newspaper art critic was placed alone in the corner, giving him a vantage point from which to witness the entire installation. He was overseeing things without really being a part of them. The can for his assistant also had a good vantage point, but his position was singular, facing the unnamed cans, which were clustered close together in the corner near the article about the commune. Every visitor – as a newcomer to the can meeting – was invited not only to remember these histories but also to witness historical actors miraculously staged together. And as family constellations can bring deceased and living relatives together to reconfigure a family’s past, the can meeting unites dead and living figures to enable another reading of German history. Ultimately, the visitor can become another actor, activating a new constellation by simply navigating a path through the canisters.

In a way, this installation – and others – captures the visitor by way of habit. Along with the habit of looking at art in museums, there are habits that seem to have been practised on the various elements of the installation. Most – from the clipped articles to the posters for bygone exhibitions – look somewhat old and lived in, if not still in use. This manifestation of habit goes beyond the claims of the ready-made or Arte Povera. The canisters, while futuristically sparse in design, are clearly the products of a do-it-yourself method. In Manfred’s hands, a half-painted panel starts to look like part of an ongoing project, if not the secular ritual of a weekend handyman, who seems sure to return to finish the job. Old upholstered chairs can turn up as easily as old pictures, park swing sets and even entire rooms, salvaged from yet another Berlin renovation job. In the nineties, a trip to a flea market or a building under renovation sufficed to outfit a cafe or a living room, so why not an artwork? With this unfinished look – being taken apart or being put back together? — the vectorial times of the past and the future cancel each other out to give rise to the repeated temporality of the habit: as circular as the face of a clock and as visible as the shiny yellow tips on brass door handles. The visitor becomes part of this tactile familiarity, which signals the presence of a long line of regular users. While visitors are welcome to sit in the old chairs, the installations have little to do with the interactive works of relational aesthetics. History is presented as a history of regular use, which has been interrupted but might well be continued in the sanctuary of the museum.

As Benjamin noted, habit plays a crucial role in the collective perception and appropriation of architecture. Buildings are both seen and touched, but tactile perception is accomplished largely by habit and comes to influence optical perception. Compare tourists attentively studying the facade of a city hall with locals automatically walking through the doors or indifferently passing by. Through tactile habits, architecture has a peculiar relationship to collective memory. Unlike the historical fact, the habit is so familiar that it actually no longer warrants being remembered.

Architecture has the most fragile place in collective memory, precisely because its presence is taken for granted. While personal habits die hard, architectural habits can be changed by different buildings. It’s unclear how well we remember a habit, if we can readily recall the brass door handle once it has been replaced by a stainless steel one, which now shakes our hand every day as we enter the building. That’s the experiment of collective forgetting in Berlin, where not only new buildings but also new neighbourhoods and new street names imposed their habits on citizens while eradicating old habits forever. Every Berliner has suffered a bit of Alzheimer’s in these ongoing days of renovations. Who can remember what Torstrasse used to be called? How Alexanderplatz used to look? The appearance of one’s own house? While few were deaf to the sounds of drilling, hammering and crashing, so many more were left speechless, unable to comprehend what will one day be understood as the most massive urban transformation to take place in Europe since the World War II bombs. Manfred – by staging not only history but also habits on the verge of being replaced – suggests how memory and forgetting can become automatic.