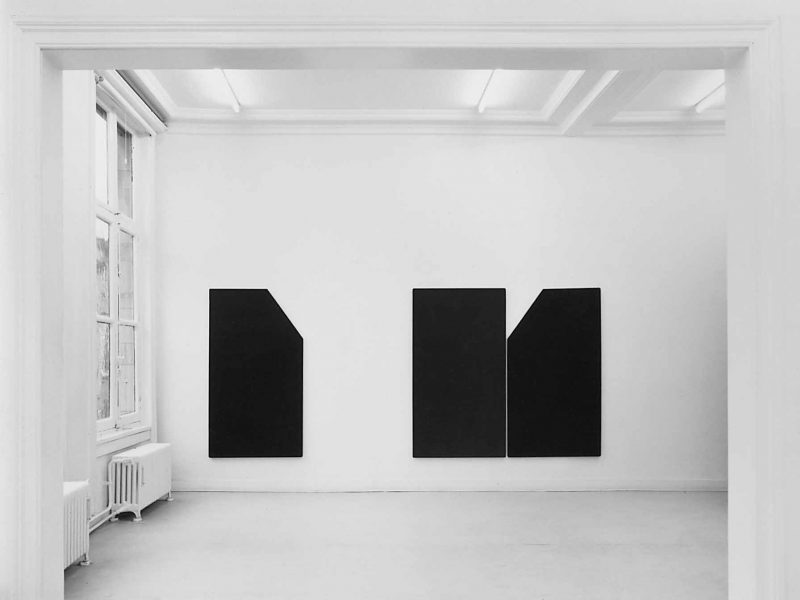 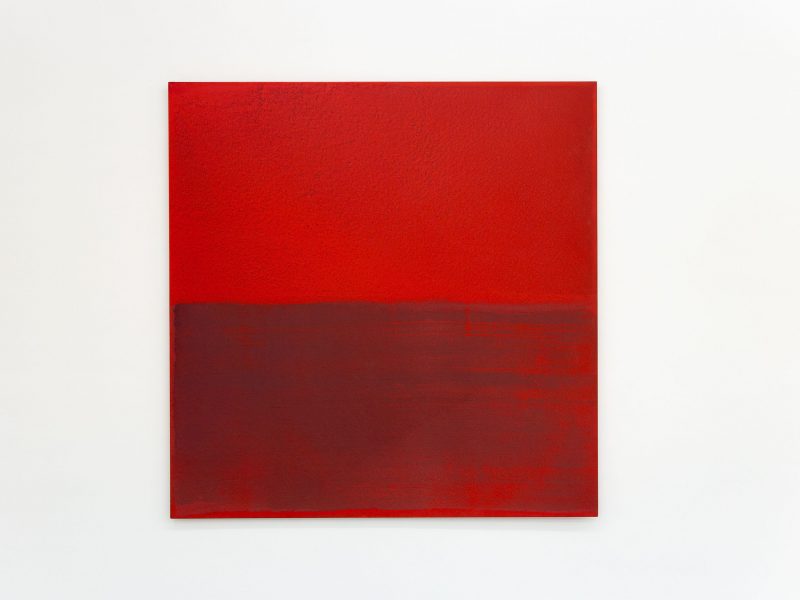 In the painter’s workshop

Matter is alive, says Marthe Wéry. Colour is alive, paper is alive, canvas and wood are alive. When I call her attention to the fact that colour is an industrially produced pigment enclosed in a tube, and that a virgin canvas is an object that cannot be called alive except in a metaphorical way and provided that incredible trust is invested in it, she goes through a split second of disbelief: ‘Yes, that’s for sure, but you know what I mean.’ I know what she means. And I watch her at work. For some years her support has been a sheet of multiplex plywood mounted on aluminium angle fitments concealed behind the board. The plywood sheets are a centimetre thick at most; their edges are slightly sanded or, rather, ‘broken’; the aluminium fitments act as stiffeners and stop the surface from warping; they also keep the picture away from the wall when it is hung. Formats and dimensions are variable, always rectangular, and of carefully chosen proportions. The two pictures Marthe Wéry is going to work on today are imperfect squares measuring about 150 x 150 cm. I wonder if it matters that the format is almost square, and raise the question. ‘Yes,’ she answers, ‘the imperfect square is more open.’ The two pictures are laid down flat, each one in a large plastic tray on trestles. The trays look like photolab developing trays; they have a drainage hole with a bucket waiting beneath it. Other buckets full of acrylic paint are within easy reach. One of them is full of very watered-down green, another a rather indefinable purple verging on amaranth. The two pictures have already been given several coats of colour. One of them – green on green – is flecked with darker spots which give an almost photographic effect, like an obliquely lit moonscape. Yet the surface is quite even. The other wine-coloured picture has a more worked surface. It has been lined, or marouflaged, with four sheets of Japanese paper which overlap and outline an irregular cross. ‘It’s to give it a structure.’ A whole amorphous and off-centre area of the picture shows a deep green which seems to rise from beneath the purple. In places, the artist has added to her colour a granular medium which holds the pigment. Beautiful as they are, both pictures look finished to me. Marthe Wéry is going to destroy them.

To start with, she goes over them with an electric sander which gives the surface a grip. The sanded effect on the purple picture is more visible. She then takes a broad, flat brush and, in a corner of the green picture, makes a swift wash with its very diluted pale green mix. This produces an elegant stroke which she pays absolutely no attention to. All that matters is the hue. And it is okay. Then things move very fast, but unhurriedly. In two or three throws, she pours the entire contents of the bucket on to the picture. The pool of colour spreads over the whole surface, banks up on the side furthest from her, spares certain areas, and closes in around small ‘clearings’, like one army encircling another. The paint is very liquid, so you feel that as it dries it will leave no more than an almost transparent film over the picture. But it is just viscous enough to creep cautiously over the surface, illustrating that property of liquids that physics calls surface tension. The pool of colour becomes rounded and bulges at the edges. And when it encircles a dry area, it proceeds slowly, making an ‘eye’ appear which then shrinks little by little. Marthe talks to me while she works. ‘You see,’ she says, pointing to one edge of the picture that the liquid pigment has not yet invaded, ‘the colour doesn’t want to go there. It’s seductive. But I’m not sure I can go along with it.’ Adding action to words, she dips her finger in the colour that has come to a halt near the picture’s edge, and, just like that, the colour covers up the seductive – too seductive – uncovered area, where the picture pronounced, as it were, its stratified history. I realize that, for Marthe, colour must be allowed to speak freely, but not just any language. The boundary between true beauty and seduction is a terribly fine line, as is that between the freedom of the material and demonstrative process art. Meanwhile, in the upper part of the picture, a deep pool of colour has built up. Without a moment’s hesitation, Marthe grabs the picture by the opposite side tilts it upwards. The colour trickles and flows into the tray. Then comes the moment to leave it to the vagaries of the way it dries. Marthe fixes it in a not quite horizontal position using five or six small wooden blocks, and takes one last look at it before turning to the purple picture. I find myself thinking that her dialogue with her pictorial means is definitely very prosaic. She is hoping for a surprise, but her hopes are not set too high. She is wary, as if faced with too much romanticism. I also find myself thinking that she is keeping her colour in a state of probation. The way tradition keeps its painters.

Marthe plunges a mixer into the bucket of amaranth to stir her colour. She pours a good dollop onto the second picture in a way that strikes me as being extremely offhand. The green patch that once emerged from the purple is engulfed, and I feel a pang of sadness. As if she were reading my thoughts, she says to me, talking about the green: ‘Right now, I miss it, but I’ve got some water. We can get it back.’ And she throws a whole bucketful of water where the green was. It reappears. Not far from the edge, a green ‘eye’ forms, growing more and more intense as the purple surrounds it. It makes the whole picture ‘stand up’. But the eye contracts. ‘Mustn’t get too attached,’ Marthe says, as if she were talking about a lover. ‘There, it’s gone.’ The eye is reabsorbed. Because the picture is lying in its tray, it is not clear which way it will be hung. We walk round it to see if it will dictate which is its top and which its bottom. The marouflage runs across the picture forming a central line which we both feel has to be hung vertically. At the top, the purple mixed with water runs slowly down over the green, clinging to a horizontal line at the very top, likewise created by the marouflage, with the front of the wave proceeding downwards like the arc of a circle. I can see the picture assuming the symmetry of an abstract face and Marthe says: ‘I like that a lot. It’s beginning to look like a… a Malevich? No, who do I mean?…’ And tries to remember the name that is on the tip of her tongue. I say: ‘Like a Jawlenksky face.’ She replies: ‘That’s it. Exactly that.’ We have just provided ourselves with the perfect illustration of free association and inner necessity, in painter and onlooker alike.

Aesthetic judgement is comparative but it is the picture that summons up the comparable works. The verdict then decides whether Jawlensky is a desirable reference. He is, and Marthe is happy about it, but the Jawlensky is disappearing. The purple continues to run downwards and the facial quality of the picture is falling away. Marthe gives up on Jawlensky without any regrets, but she seems to be clinging to the median line, as if to the apple of her eye, and this line also seems to be about to become blurred. It is time to do something. Lift up the picture this way and that, drain off the surplus colour, but leaving the mauve and the green free to battle it out, and apart from that, touch nothing – such are the watchwords she seems to be obeying. She sets up a rotating fan which will speed up the drying process, and may – or may not – be powerful enough to halt the inexorable advance of the mauve. The picture seems to me not as good as it was when the session started, but this doesn’t bother Marthe. ‘You have to go through stages that are less satisfactory and less seductive. I allow myself the liberty of cheating with the rules, but I don’t often chip in. Only if the result is too anecdotal. I’m afraid of being too much in charge, because then things become stuck, and I don’t want something that’s the result of fixedness.’ ‘You’d be the only one who knows,’ I tell her. ‘Yes, but I think amazement can be transmitted.’