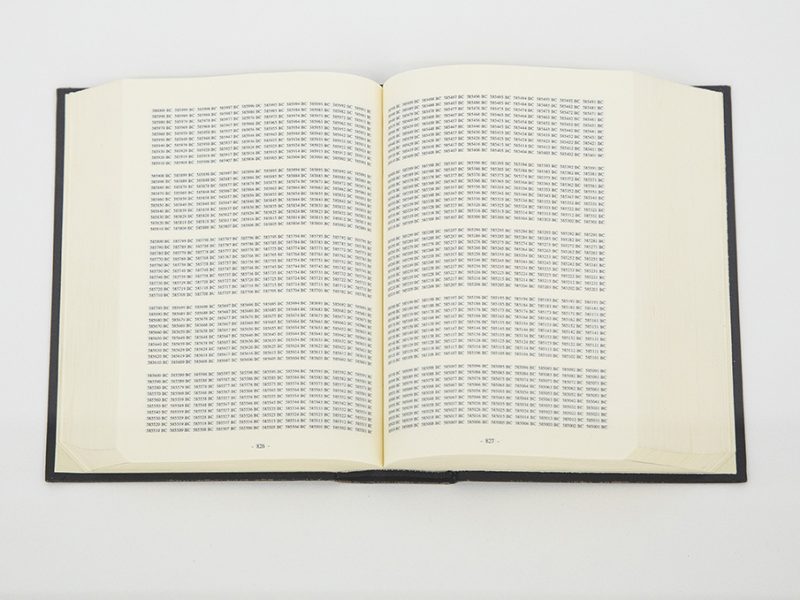 Time, as registered in its familiar increments of days, years, centuries, and eons, has preoccupied On Kawara since the mid-1960s, when he began his magnum opus, the Today Series. Each of the Date Paintings that constitute this ongoing work is a monochrome field on which is inscribed the date of the day on which the individual painting is executed, in the language and according to the calendrical conventions of the country in which Kawara is present when he begins it. If he does not complete it by midnight he destroys it. Some days he makes more than one; very occasionally, a third is added to that second before the midnight deadline strikes. Most days he makes none.

Certain sets of limitations govern this series, as they do Kawara’s other bodies of work. Every painting in the Today Series conforms to one of eight predetermined sizes, all horizontal in orientation, ranging from eight by ten inches to sixty-one by eighty-nine inches. And for every painting the artist mixes the color afresh, so that the chroma of each is unique. Colors and tonalities in the brown-gray and blue-black areas of the spectrum have become prevalent in recent years; earlier, cerulean blues and clear reds were more frequently employed. Four or five coats of acrylic are evenly applied to the surface of the canvas, on the sides as well as the frontal plane, and each layer is sanded down before the next is added, creating a dense matte surface. The whole is self-evidently an object, a three-dimensional entity. Letters, numbers, and punctuation marks are then meticulously built up across the center of the monochrome field. Eschewing stencils in favor of hand-drawn characters, Kawara skillfully renders the script, initially an elongated version of Gill Sans, later a quintessentially modernist Futura. Whatever slight variations and adjustments in the letters may be discerned over the years, they are no more significant than the often minute differences in hue. Nor is the choice of color more expressive or connotative than the measurements that determine the size of an individual work.

Each painting is stored in its own handmade cardboard box, alongside a clipping from a newspaper published in the same city and on the same day that the artist made the painting. History as recorded in daily events, whether global, national, or local, is bound together with the residues of individual activity and memorialized under the rubric of the date. In addition to the title, determined by the day on which the work was executed, a subtitle may be appended. These vary widely from diaristic notes to impersonal records, as the following examples from January 1966 attest: “I thought about memory and sense,” “Janine came to my studio,” “I am painting this painting,” “USA began to bomb North Vietnam again.” In counterpoint to the dialectic between order and chance—that is, between the regularity and standardization imposed by calendrical and linguistic conventions and the arbitrarily determined strictures governing size and color—there is a modicum of subjectivity: in the subtle traces of manual execution, clear evidence is offered of the act of making. A constant traveler, Kawara has now created Date Paintings in more than 112 cities worldwide, in a project that will end only with his death.

Other, related works in his oeuvre confirm the existentialism at the heart of his metaphysics. For example, in 1970 he began intermittently to send telegrams to friends and professional colleagues that always contain the same message: I am still alive. Once a medium of urgent news, the telegram has become almost obsolete as a means of communication. Normally it announces timely or memorable events, such as unexpected deaths, but Kawara’s messages invert these customary practices: given that everyone is assumed to be alive until the contrary is announced, Kawara’s reassurance that he is still living seems gratuitous—absurd. Moreover, even though it was true at the moment it was sent, it may not be so by the time it is received. Imbued in equal measure with humor and pathos, these terse missives nonetheless offer testimony to a fundamental state: consciousness, a precondition to all other forms of being. Although destined initially for the attention of a single recipient, they were immediately understood to be a form of Conceptual art and hence soon exhibited or published in catalogues and monographs on the artist.

Kawara has long shown the Today Series both as single paintings and as groups, and with or without their boxes. Recently, however, more far-reaching premises have occasioned different types of presentation. In 1993, he planned an exhibition unprecedented in his career for Dia. Titled “One Thousand Days One Million Years,” it opened on January 1, 1993, and closed on December 31 of the same year. Complexly structured, it involved three components. The largest was a selection of a thousand works from the Today Series, all executed in New York City, where this Japanese-born artist has partially resided since 1965. Heralded by the originary canvas, dated January 4, 1966, different groups of the paintings were installed in the gallery at the beginning of each month over the course of the year, so that the visitor who wished to experience fully the exhibition was required to return time and again in order to view the unfolding of the thousand days from its inception onward. Concurrently, and for the duration of the show, in a small room adjacent to the principal exhibition space, One Million Years (Past) was exhibited in its original form, as a ten-volume book in which the dates of the one million years preceding are typed in Arabic numerals in neat rows of nine columns, a decade per line, with every century slightly separated from the preceding, as in a paragraph, and five hundred years to each page. A dedication, “For all those who have lived and died,” introduces the work. Its companion, One Million Years (Future), which opens with the inscription “For the last one,” was first executed some ten years after the completion of One Million Years (Past), also in the guise of an edition of leather-covered binders. But at Dia, for the first time, it was presented as a recording, in which a male and a female voice counting continuously, year upon year, into the future were audible in the museum spaces.

Over a succession of visits, visitors to “One Thousand Days One Million Years” not only experienced the lapse of real time, that is, lived time, but were faced with a future that, as mapped in Kawara’s sound piece, had passed according to a quite differently calibrated temporality. As they surveyed the seemingly random dates on the paintings aligned sequentially around the gallery, some canvases might, fortuitously, have seemed significant; those marked with the birthday of a friend, a family anniversary, the beginning of a war. History and memory were invoked but ultimately yielded little that proved telling. The reiteration of countless dates served as the vehicle of ontological meditation rather than epistemological inquiry: time came to be experienced as a lived abstraction. Through this telling juxtaposition of three different works, Kawara subtly restated an abiding preoccupation in his practice: the conviction that temporality and duration, while objectively determined—that is, determined according to standardized systems and concepts—are nonetheless always and finally subjectively experienced in and through the present moment.

In two recent projects Kawara deployed the Today Series in a more redemptive spirit, though once again via channels that challenge linguistically based forms of communication. In “Pure Consciousness,” a traveling exhibition initiated in 1998, seven paintings from consecutive days are installed in kindergartens so that, as part of the classroom decor along with teaching aids and the pupils’ artwork, they are available to students and teachers in their daily activities. For young children taking elementary lessons in reading, writing, and mathematics, in drawing, in history and various forms of literature and storytelling, these works may prove pertinent as models—they may offer alternatives to prevailing paradigms.