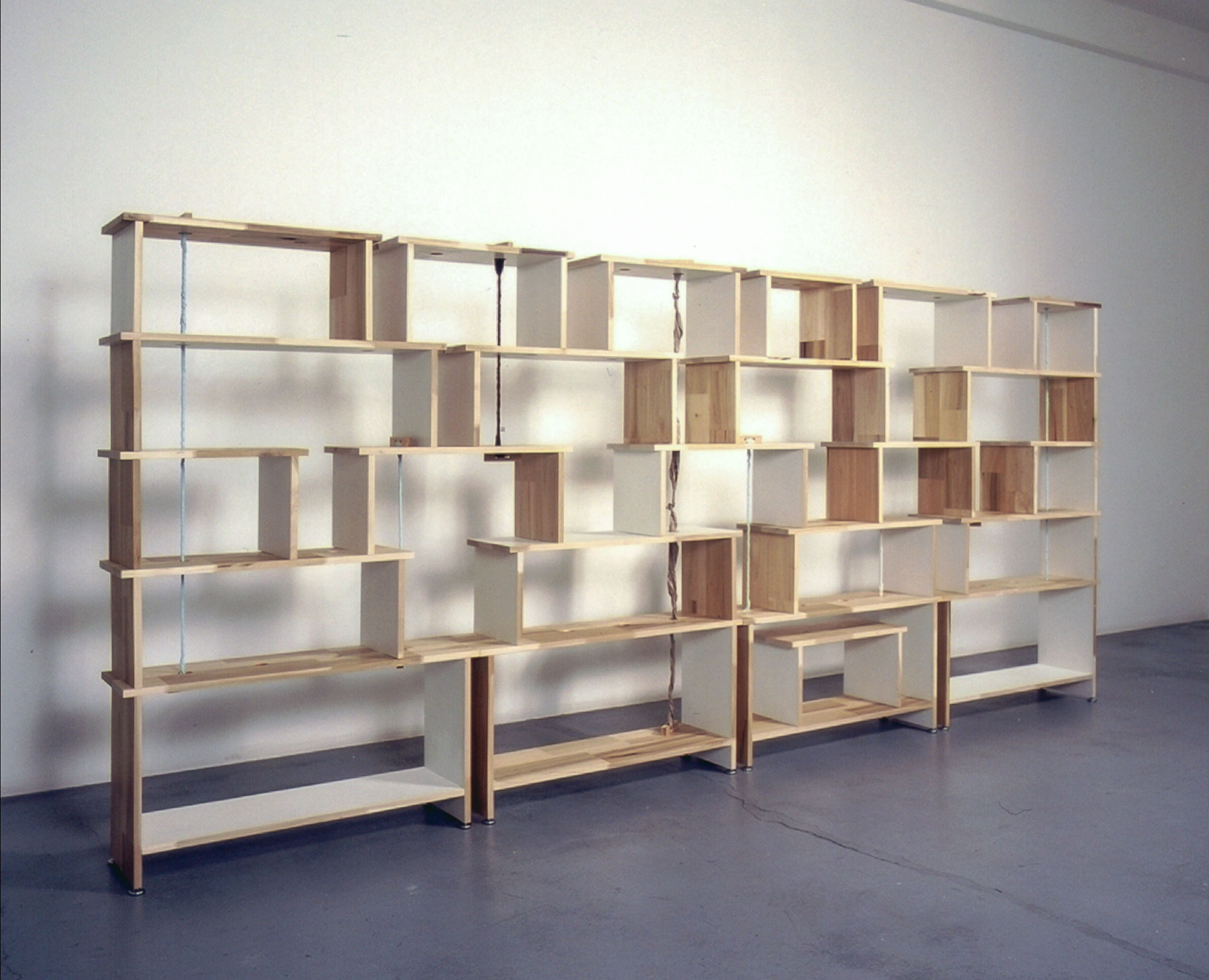 The American artist Joe Scanlan conceives and constructs objects according to his practical daily needs, even if these objects are in very close relationship with questions pertaining to art. Most illustrative of the artist’s approach, The Nesting Bookcase, may be perceived both as the modular shelves that they actually are, and as sculptures. If formal simplicity evokes minimal and conceptual art, in the same way aesthetic sobriety corresponds to the principle of the “Do It yourself”, since a makeshift approach as well as scarcity of means do not exclude quality or invention. Outside the pale of conventional responses, the Nesting Bookcase is permanently re-defined according to its presentation and usage, whether it is exhibited in an art gallery or set in an apartment, whether merely highlighted or utilized.

What Joe Scanlan shows today is precisely how appropriating the work of art conditions its mode of existence. The artist has assembled a whole set of photographic documents on what has been made of those Nesting Bookcases bought by art collectors. In the privacy of apartments the same object may be placed either in the living room or in the bathroom, as a shelf for bibelots, magazines or books, preserving at times it’s unique status as a work of art. These pictures of private spaces are re-involved into the creative process in the form of wrapping design prototypes, labelized as it were. The collection is presented in various configurations, either posted flat on the wall, or spread-eagled inside-out like a formalist construct in the manner of Robert Ryman, or placed volume on the ground like a sculpture or a box of Brillo.

What is retained of these set-ups is their potential for transformation and adaptation in direct relation to reality and social activity. The real world has not been transformed into a simple image, since the boxes themselves have become so many envelopes that have several finalities and several possible uses. Once again these works, empty of all content, are open and ready to receive whatever the photographed Bookcase may contain or whatever one may want to have it contain according to one’s needs or wishes. Without denying the market dimension of a product, Joe Scanlan invents his own responses in a situation of a world of waste and overconsumption. The cheap disposable furniture kits are becoming convenient evolutive aesthetic structures. With a concern for economy and autonomy, the artist reconsiders the notions of craftsmanship and exchange, he reaffirms the possibility to realise and to appropriate to oneself “beautiful” objects in a democratic ideal.

This work also asserts the idea that the work of art, which is determined by the artistic activity and legitimized by the institution, can neither liberate itself from the spectator’s sense apprehension nor from reality. In search of a lost unity, aesthetics involves an ethic dimension and “art thus succeeds once again in transforming man’s incapacity to come out of his historical status, for ever balancing between the old and the new, the present and the past, into the very space where he can assess the original dimension of his sojourn in the present and, each time, retrieve the meaning of his action”.