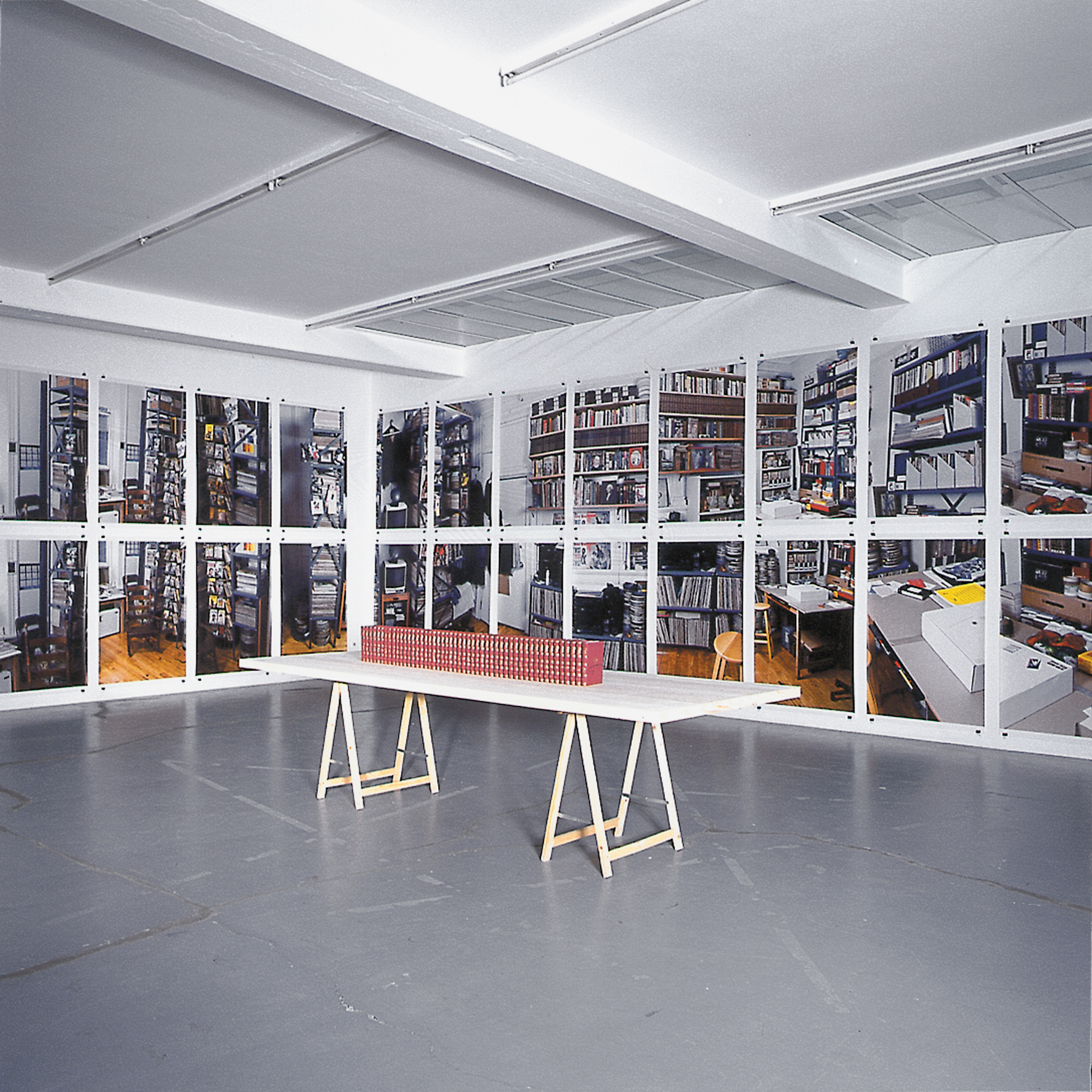 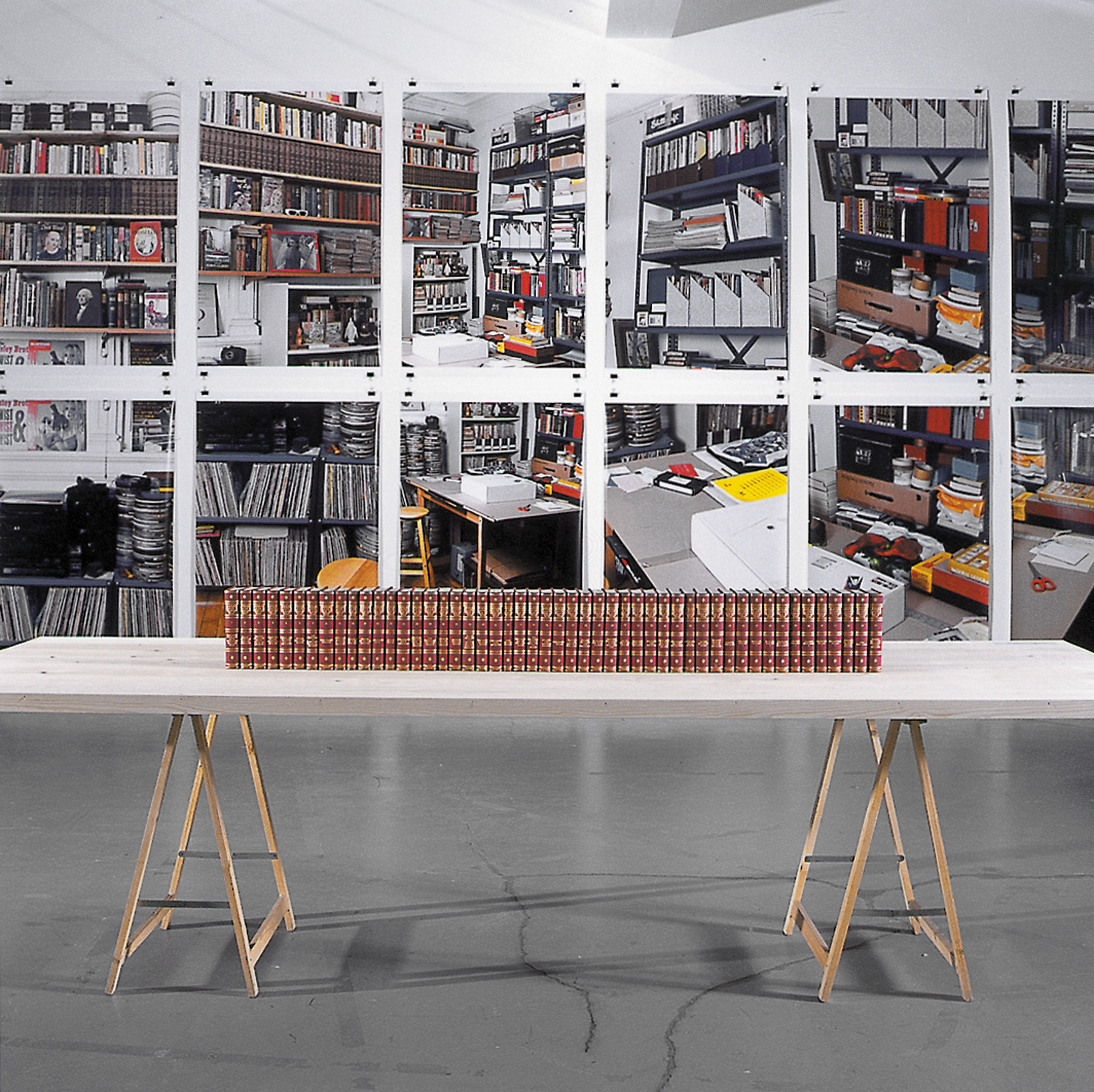 The 50-volume set of books is an exact reproduction of the exterior of the Harvard Classics (Dr. Eliot’s Five Foot Shelf of Books) published in 1910 by P.F. Colliers & Son. The premise of this encyclopedic selection of texts attempted to provide knowledge in the areas of history, philosophy, science, politics, literature and the arts deemed essential to a cultivated man. Ruppersberg’s volumes are similarly encyclopedic, but personal, retrospective, and poetic in nature, in the artist’s words, “a collection of texts which represent a part of the unseen interior and symbolic sense of the space.”

In Ruppersberg’s edition, the first volume contains a facsimile of the original introduction by Dr. Eliot. Volumes two through forty-eight contain sixteen pages each of five narratives that run concurrently, so that they may be read simultaneously or individually throughout the volumes. The fiftieth volume, represented on the web in the upper right corner of the screen, contains an index of photographs of the four walls of the studio. Numbers beneath the pages of text reference this index and can be clicked. Alternately, one can navigate around the studio using the arrows surrounding each image. Several dozen of the photographs offer the viewer the option of clicking on a box, chest, pile of papers, or books, revealing a selection of items including postcards, photographs, greeting cards, pages from pulp novels, and sheet music covers. Sound from films, tapes, and various other recordings found in Ruppersberg’s studio are available as a soundtrack.

His experience as both a collector and an artist informs the first of the five narratives, based on his series of works entitled Honey I rearranged the collection. This assembly of statements investigates issues of order and arrangement while making comic and sometimes poignant references to the relationships between collector and artists, art world, spouses and protagonist. (“Honey, I rearranged the collection to showcase the work we got before anyone else even heard of the artist.” Or “Honey, I rearranged the collection so that it represents my secret life. I’ll be back in 2 weeks.”) The 50 volumes themselves raise a question of order: each book has two numbers, the one inside the cover differs from the number inscribed on the spine. Ruppersberg invites the viewer to rearrange the volumes, to experience them without a concrete sense of order or hierarchy, and to read the texts in various directions.

Another narrative consists of a wide range of quotations and descriptions, including aphorisms from The Secret of Life and Death, an entertaining meditation from 1977 on categorization and entropy, each statement beginning with “Some men…” and end with “Others do not.” (“Some men attempt perfection and spend their lives ruthlessly. Others do not.” Or “Some men believe Turner to be the father of modern painting. Others do not.” ) This structure alternates with versions where the words have fallen out of a sensible order, such as “Judy men in caught arms stumbling, some have a drunken their Garland. Not others have.” In his book on Ruppersberg, A Different Kind of Never-Never-Land, Dirk van Weelden suggests that language, in its role as our means of understanding the world, is a metaphor for life, and the garbled sentences represent death-separation from a workable or meaningful context. Thus while things may decay, their energy doesn’t disappear, it only changes form, with potential for continual reincarnation and reinvention. The subtitle of the fifth part of The Secret of Life and Death is Try again, Mr. Penn, which introduces a new set of aphorisms, and the process begins anew.

The fourth narrative, entitled The Three Marcels, references Marcel Duchamp, Marcel Proust, and Marcel Broodthaers, all of whom have been important influences in his work. “To defamiliarize the familiar as only a master of the familiar can,” describes another theme, with homage to Duchamp, that runs through Ruppersberg’s decades of making art. As if to illustrate, the following narrative, entitled The Master of the Familiar (private) / Chapter One, Brecksville, Ohio / Chapter Two, Obituaries, consists of, amongst excepts from obituaries, snippets from personal letters, such is this from his mother, “The place sure looks nice, all newly mowed and forsythia, tulips, apple and cherry blossoms all in bloom, wish you could see it…” and “The lilac looking in the bedroom window was also lovely this year.”

In his comprehensive and illuminating essay on Ruppersberg’s work, Allan McCollum wrote about Al’s Café, an early and seminal work in which Ruppersberg created a functioning café for 3 months: “the brief and short-lived Café was—like nearly all of Ruppersberg’s work—a love letter to the ephemeral and to memory, a valorization of the things that are destined to disappear.”

Ruppersberg was born in Cleveland, Ohio, and graduated from the Chouinard Art Institute in Los Angeles in 1967. He began as a painter but quickly abandoned oil and canvas in favor of projects that were about language, pictures, books, and ideas. His love for images and texts led him to gather thousands of books, postcards, photographs, magazines, slides, posters, and a large collections of industrial and educational films from 1931-1967. For an artist interested in the cultural mythologies, narratives, and common truths of everyday life, this collection of materials, featuring mostly items from American popular culture of the mid 20th century, has frequently served as fertile source material in his work. His studio at 611 Broadway is now gone, but with these images and massive collection of Ruppersberg’s texts—severed from their contexts, in various states of order, and able to be read in numerous directions—The New Five Foot Shelf stands ready to reinvent meaning through reading.

The Allen Ruppersberg’s studio of the last 15 years is collapsed into a 50 volume set of books and a set of posters. The 44 posters reproduce the studio on a one to one scale and when they are assembled it recreates the studio as it was at 611 Broadway. The books are an exact reproduction of the Harvard Classics, Dr. Eliot’s Five Foot Shelf Of Books published in 1910 by P.F. Collier & Son. It provided in about 22,000 pages, knowledge of ancient and modern literature that seemed essential to the idea of a cultivated man. It came in a handsomely bound set of 50 volumes of about 350 pages each.

We have reproduced them (on the outside) exactly as they were. On the inside, the volume 50 of the books is a second photographic record of the studio that serves as an index. The first volume is a facsimile of the manual of the Five Foot Shelf Of Books. The other 48 volumes are a collection of texts which represent a part of the unseen interior and symbolic sense of the space.

The text pages are arranged so as to appear to be captions for selected pages of the index as well as a narrative that runs throughout all of the volumes. They can be read one sentence, one page, or one book at a time. There are 16 pages of text in each book. Four signatures of each volume are printed, the rest are left blank. Into this empty space we have randomly inserted a selection of obituaries, mostly of artists, from the collection of Allen Ruppersberg.

Mixing real time with fictional time, a piece of the studio and a piece of the actual world mark a page in a purely imaginary space. Since the work can be read in many ways and directions at the same time. We have left many bookmarks to plot the course. When everything has been completely rearranged and put back together again and again by the viewer, a very private world is opened up for all to see. One collection placed inside the container of another. An old space is filled with new information.

An index is a type of sign that arises as the physical manifestation of a cause, of which traces, imprints, and clues are examples. In this case, the photographs of the studio bear an indexical relationship to the works and ideas that came out of it rather than the objects seen in the photographs. A new Merzbau, “some form of container for a variety of objects which bore commemorative and autobiographical significance”. A room folded into a set of books. An architectural autobiography. Another form of concrete poetry with the pages shuffled like cards and a rhythm to match. 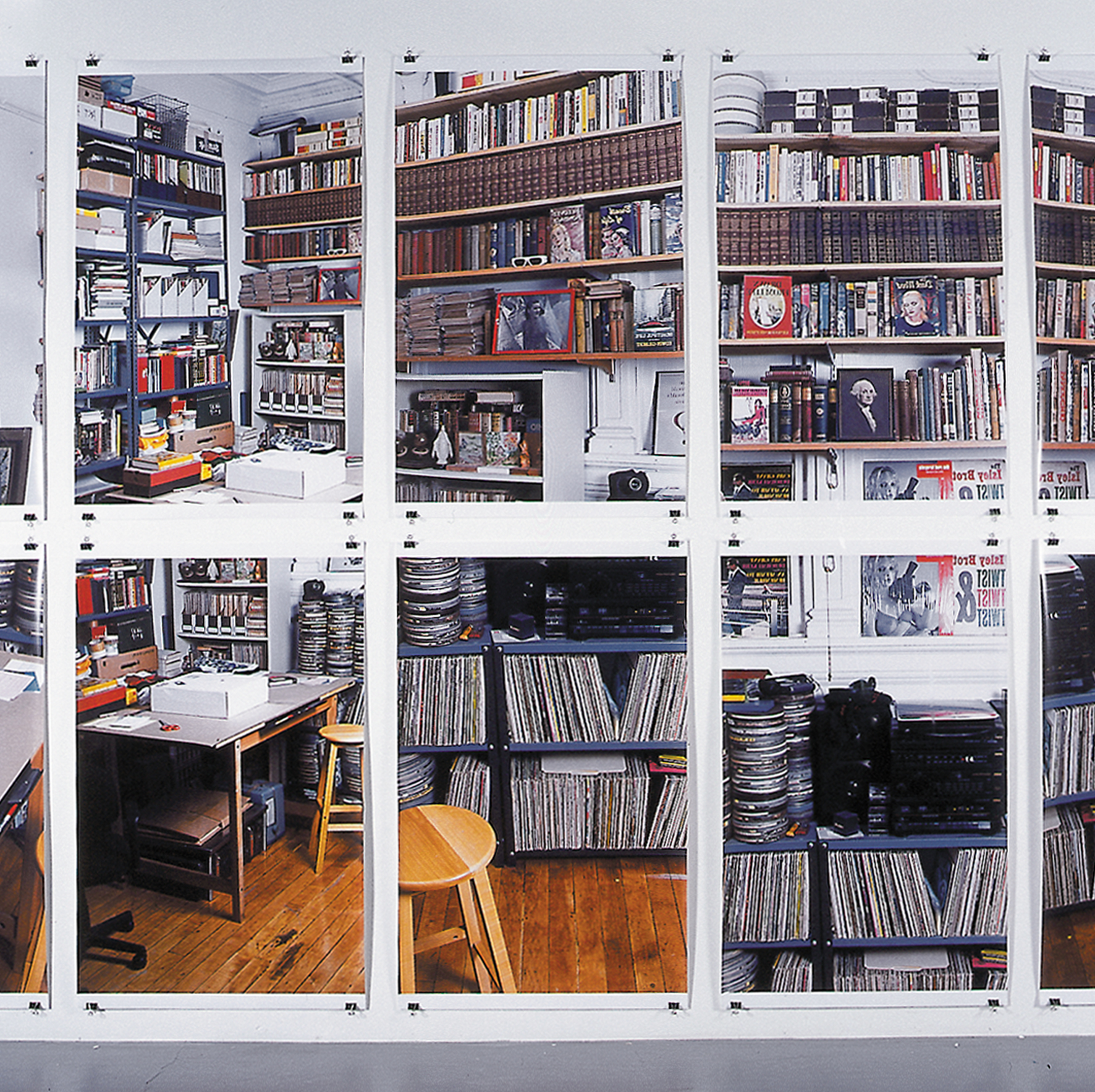