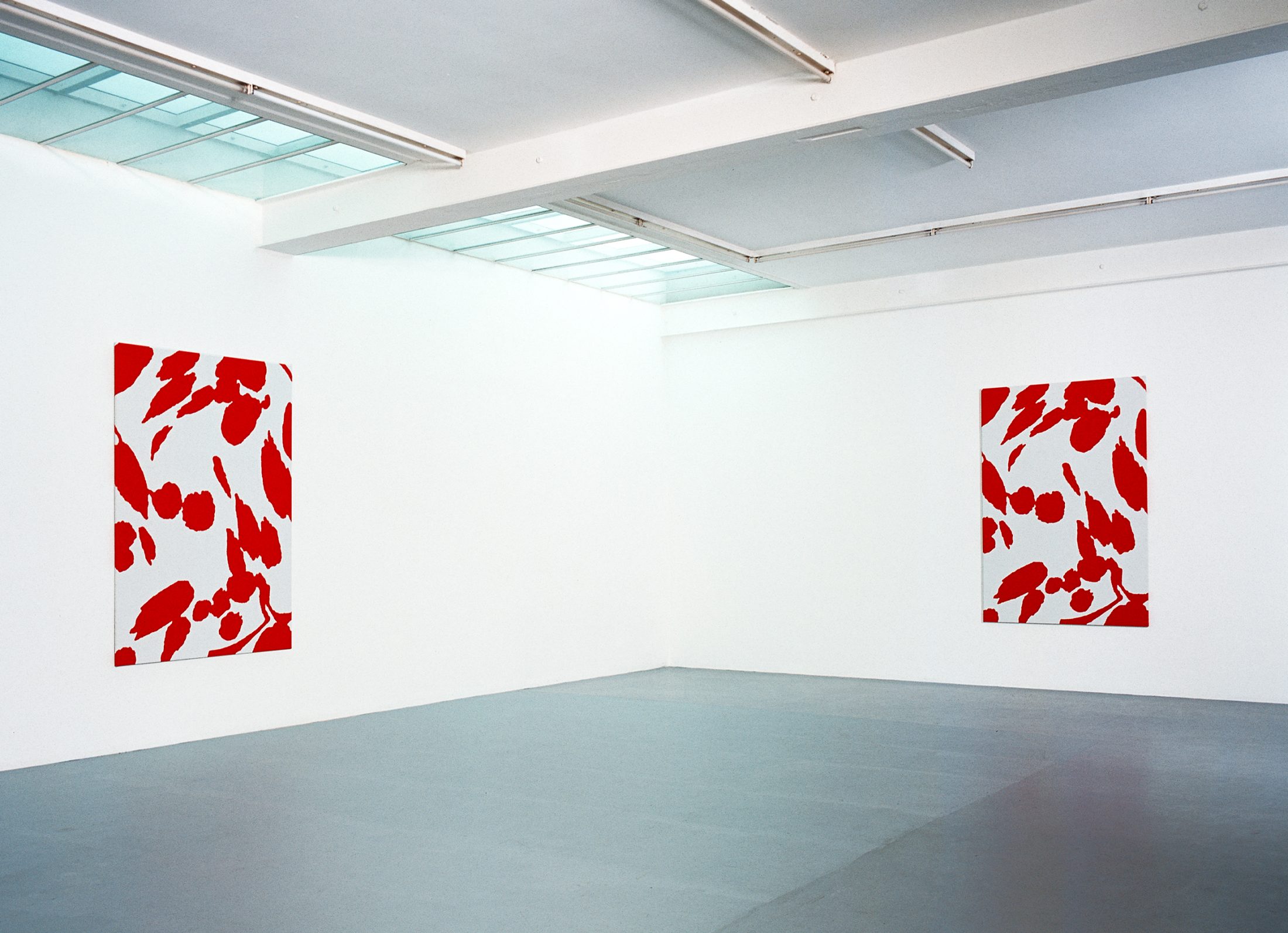 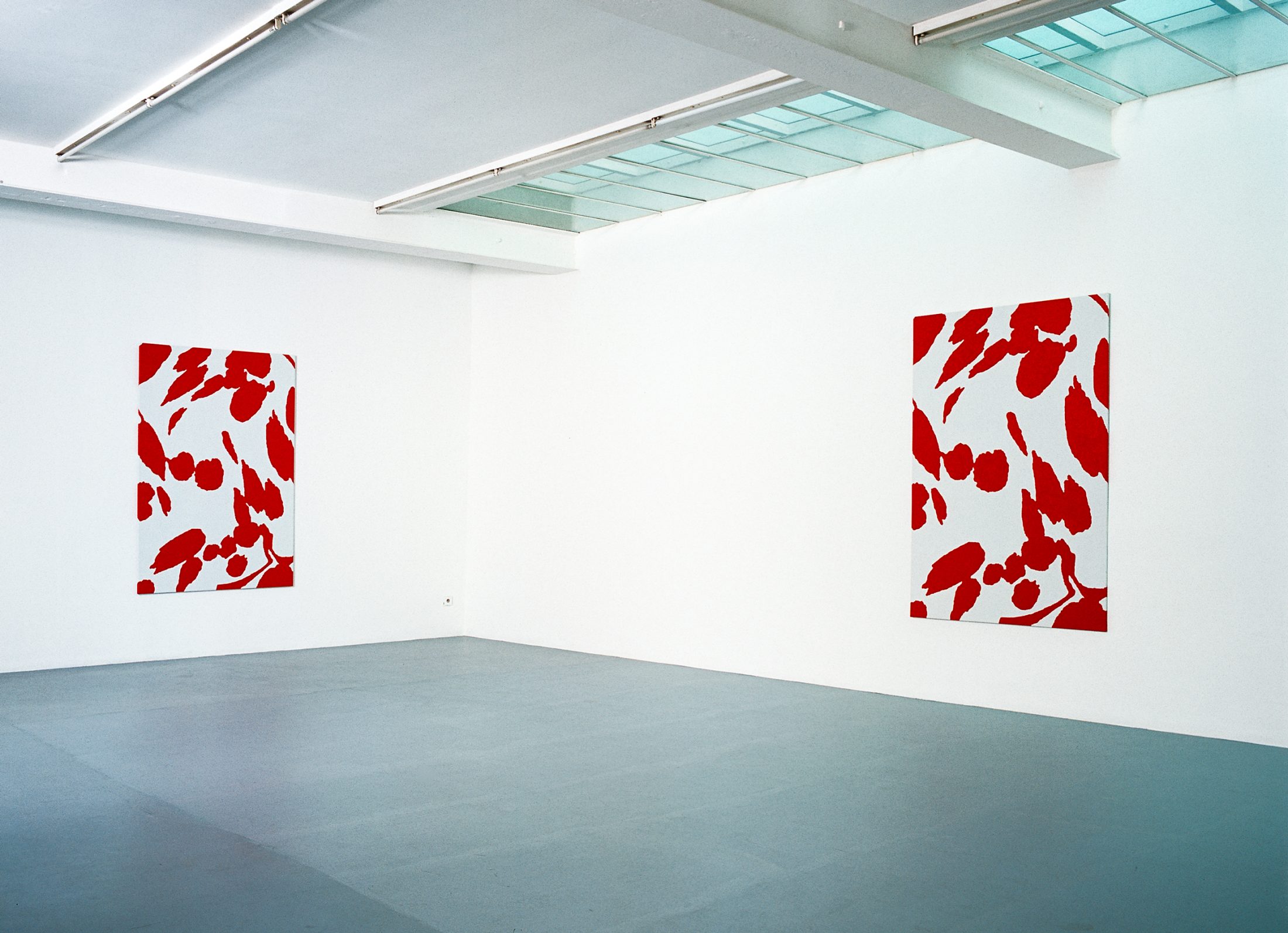 It has been ten years since Daan van Golden exhibited work in a gallery in Antwerp. In 1993, also at Galerie Micheline Szwajcer, Daan van Golden showed four paintings entitled ‘Heerenlux’, the name of the brand of paint used by the artist. The four paintings, each 120 x 94 cm, all represented the same detail of a decorative pattern of leaves and fruit found on a piece of fabric.

Last fall van Golden returned with six more paintings entitled ‘Heerenlux’; they refer to the same motif and are painted in the same way, with the same paint, in the same color red. However, they are very different works. This time, they offer three different patterns, though still taken from the same fabric. In the first room, three 200 x 135 cm paintings each repeat a section of the pattern in close-up. In the second room, three smaller paintings of various sizes offer even closer views of the same motifs.

With each of these two successive zooms in, the density of the motif is reduced. The repetitive aspect of the pattern, which the first series ten years ago made apparent, gives way to an interlacing that is more abstract, the flowers and fruit disappear, but at the same time remain figurative, insofar as it evokes sensual and fanciful forms.

At the entrance to the gallery, the artist had placed two small photos that reminded the visitor of his previous exhibition. But the show was accompanied by a 1991 text by the artist called ‘Art Is Not a Contest’. So it’s not, apparently, that this show was meant to represent any kind of progress beyond the earlier one. In the early ‘60s, the Dutch master traded gestural abstraction for the painstaking and exact reworking of found motif, first on wrapping paper from Japanese department stores like Mitsukoshi, then everywhere his life as a traveler took him: Van Golden refused to participate in the race for novelty.

He chose to track down the exceptional in the banal, beauty in the insignificant, the marvelous in the fabric of everyday life. With a concentration and patience that imposed an extremely slow rhythm of production on him, the ten years that separated the two exhibitions must seem a reasonable laps of time to van Golden, he has striven to call attention to visual events. In art as in the world, in painting and in photography, he seeks and finds elements that will allow him to exercise his subtle art as a student of forgotten forms. He discovers strange bodies hidden in the enlarged detail of a Pollock (Study Pollock, 1989), an abstract form in the silhouette of a parakeet cut out by Matisse (Blue Study After Matisse, 2003), and smiling faces in the hearts of violets found in India (New Delhi, 1991). This exhibition, through it’s rarity and the mastery to which it bears witness, is an exceptional event. This precision with which each painting is conceived, executed, and installed testifies to a practice that for forty years has developed an aesthetic intelligence, in total freedom, whose pertinence is just being discovered now: magical. 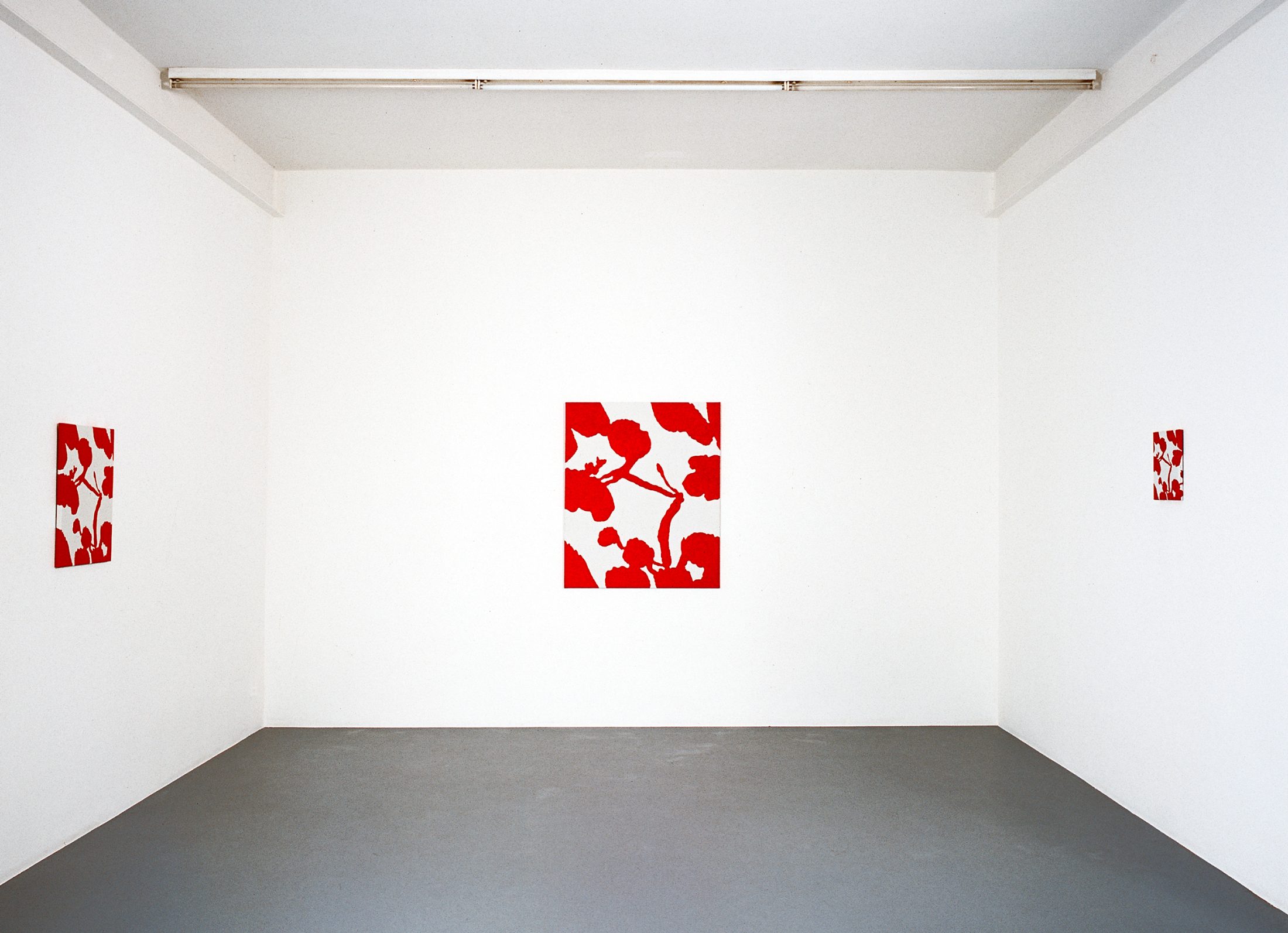