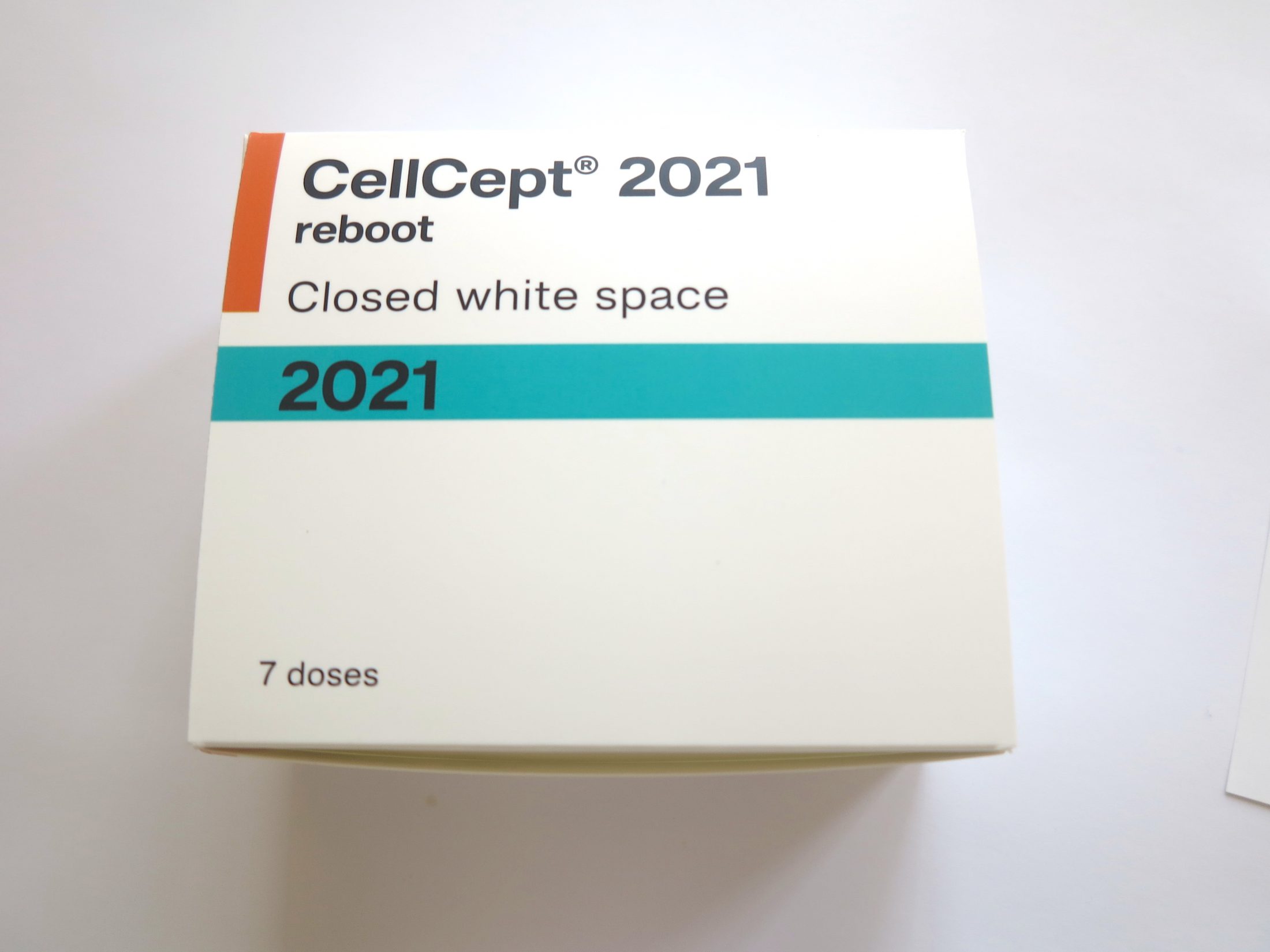 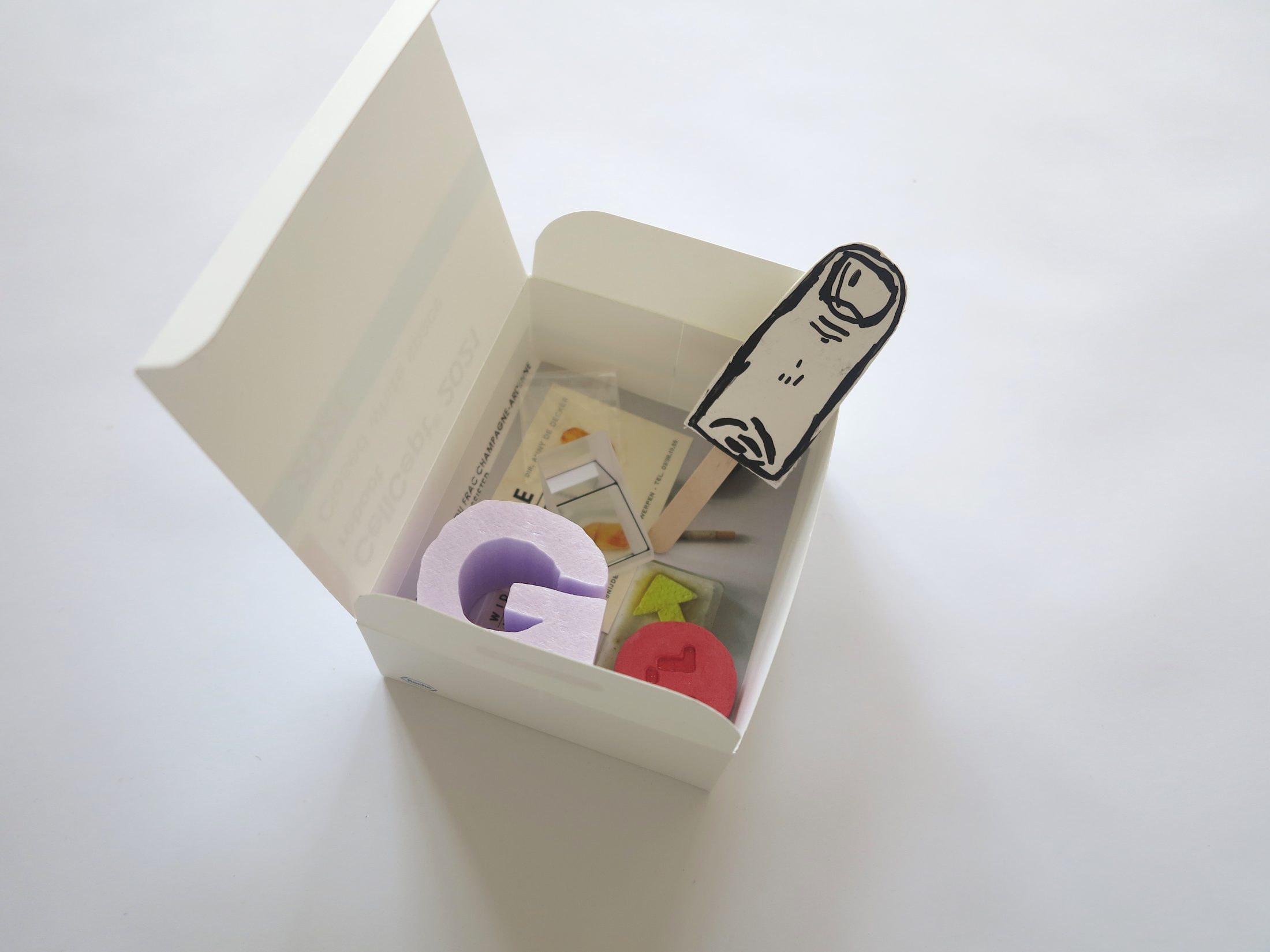 Here’s a little story: 21 years ago I spotted a Wide White Space box sent for the new year dated 1966. About 30 copies were assembled and mailed for New Year’s greetings.

I retrieved it in October 2020. Inside this plastic box, a business card of the Wide White Space, with the list of artists on the back and the corresponding object on the front, absorbent cotton to avoid that the 5 mini works clash.

There is a mold by Marcel Broodthaers (B), A sugar with resin by Panamarenko (B), ref. to his artificial snow deposited on objects, a sewn scuplture by Bernd Lohaus (D), a cigarette covered with a smoke image by Hugo Heyrman (B) and a yellow arrow cut out of polystyrene by Jeroen Henneman (NL).

This is a pocket group exhibition, proposed to the gallery’s entourage, collectors and friends.
Only persistent exhibition to date of the Wide White Space.
At the time these names were discreet, older Broodthaers was a little more visible.

Playing and communicating for the gallery, Anny De Decker is skillful.
I spoke to her a few days ago asking for details and asking permission to make a reprint of the business card, the box and the principle, she is ok. I met her thirty years ago in Antwerp with her late husband Bernd Lohaus. 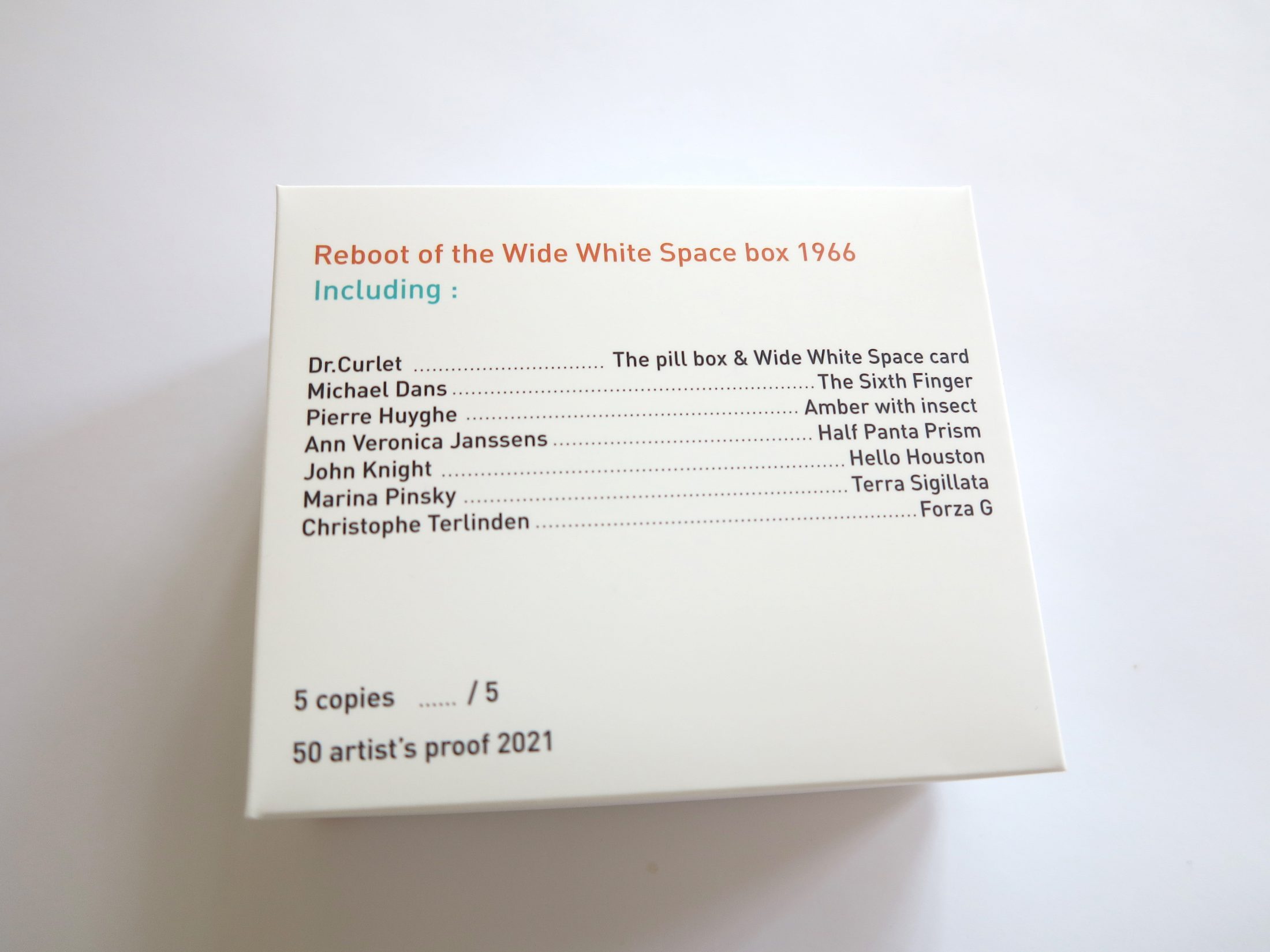 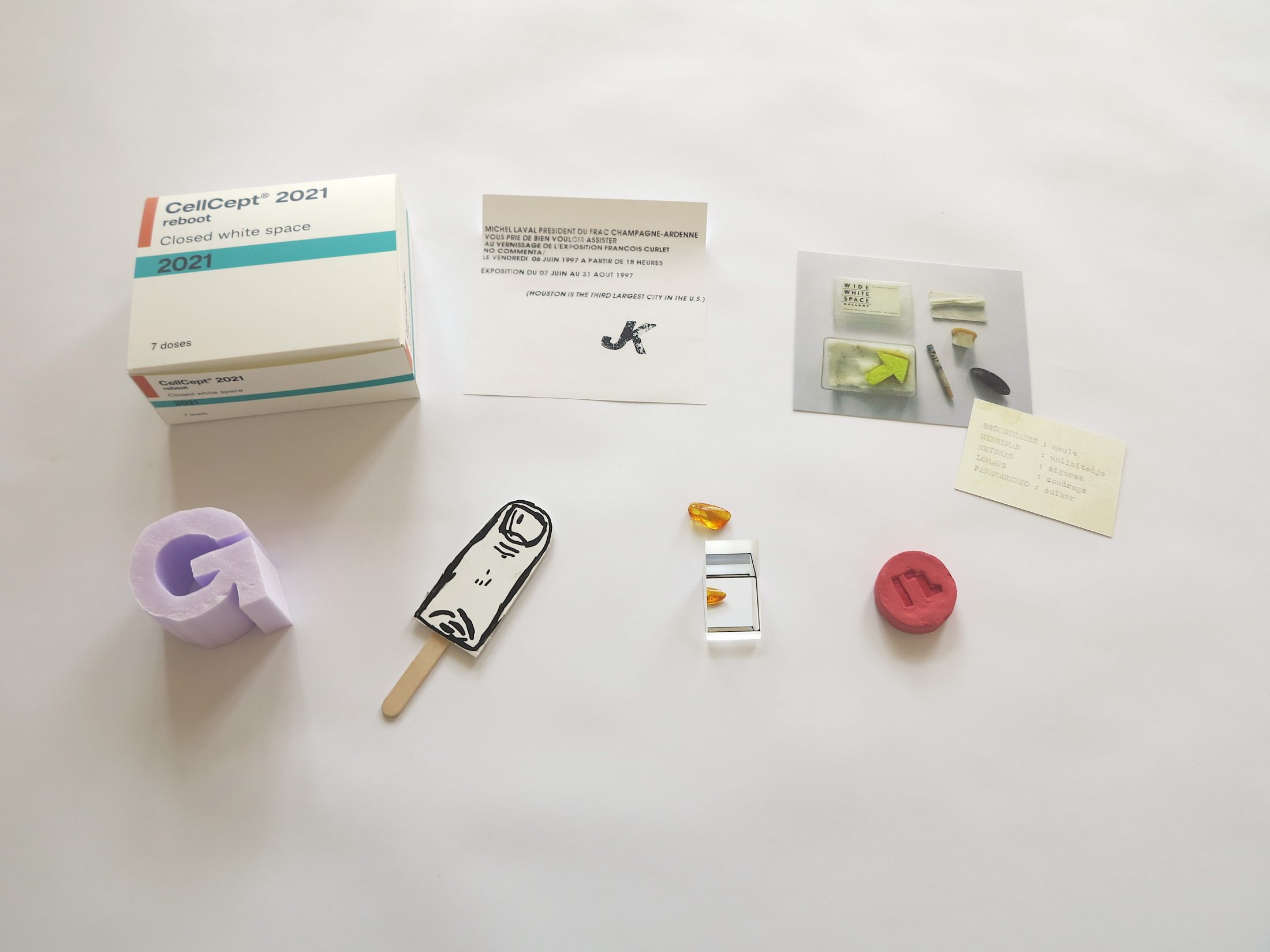 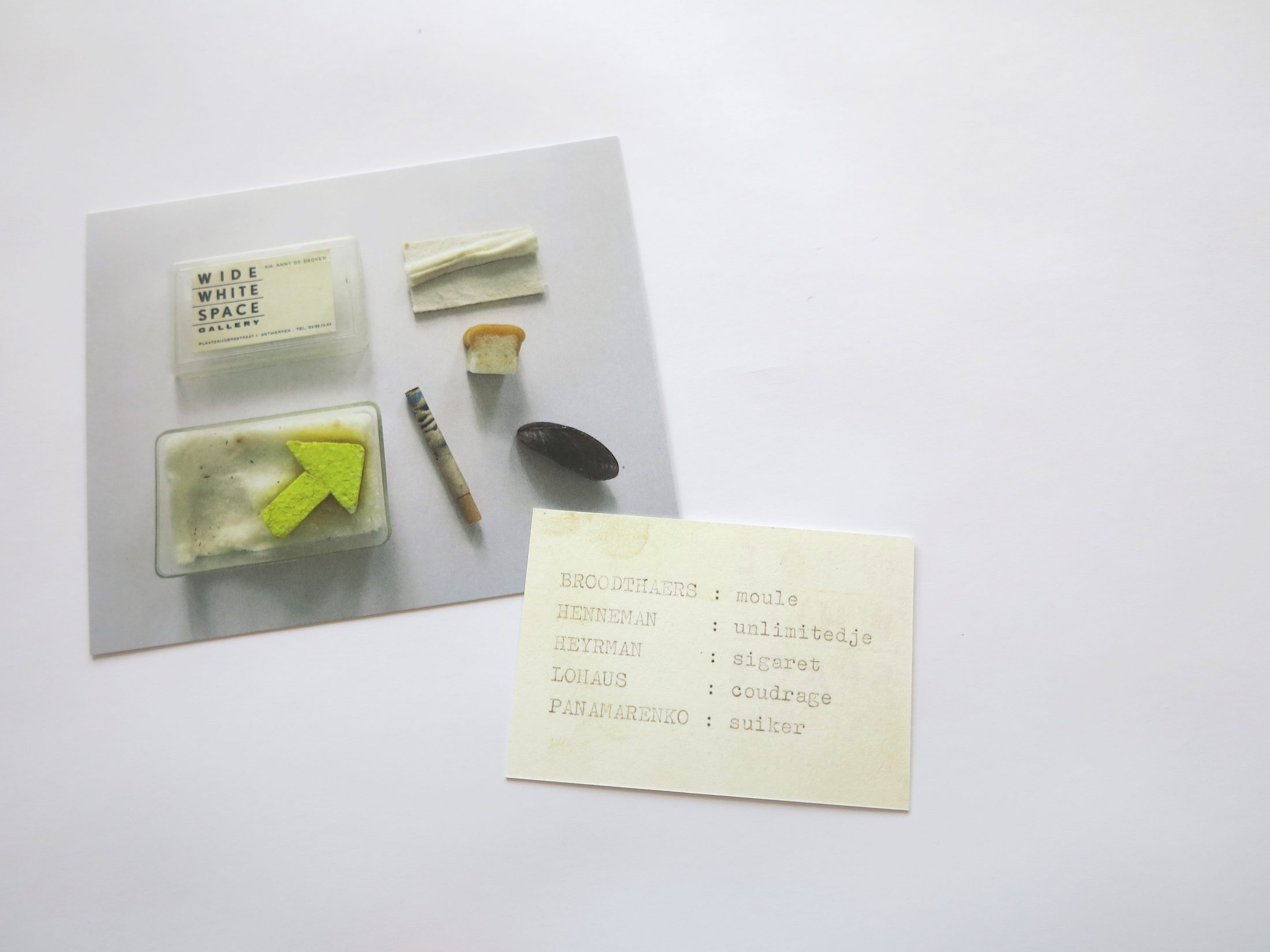 I asked artists, friends or people with a connection to the story and the subject, to make an object or other, 55 ex, unique protos or to remake.
Replicate a form or subject existing in the box, of such or such or not.
For the moment Christophe Terlinden is replaying the cutting of Joroen Hennemen’s polystyrene arrow,

I participate by redoing the box as Anny De Decker (the director of the Wide White Space) in a replica of my boxes of anti-rejection heart pills, from Cellcept. Box, daily doses as well as small works to consult.
The facsimile card of the WWS recto-verso free in the box, and the receipt, list, date etc, placed in the facsimile of the medicine box.

A gesture of memory.

Dimensions box : 13 cm length X 11 cm width X 5 cm height.
Offset cardboard, various materials. 6 artists inside. Plus the business card and a cardboard in the background of the image of the box of the Wide White Space.

As an addendum a reprint of a 1972 invitation card from George Brecht, with a used Pan Am sugar sachet from the same period reproduces on the back a multiple reference to chemistry and its uses, and snow.