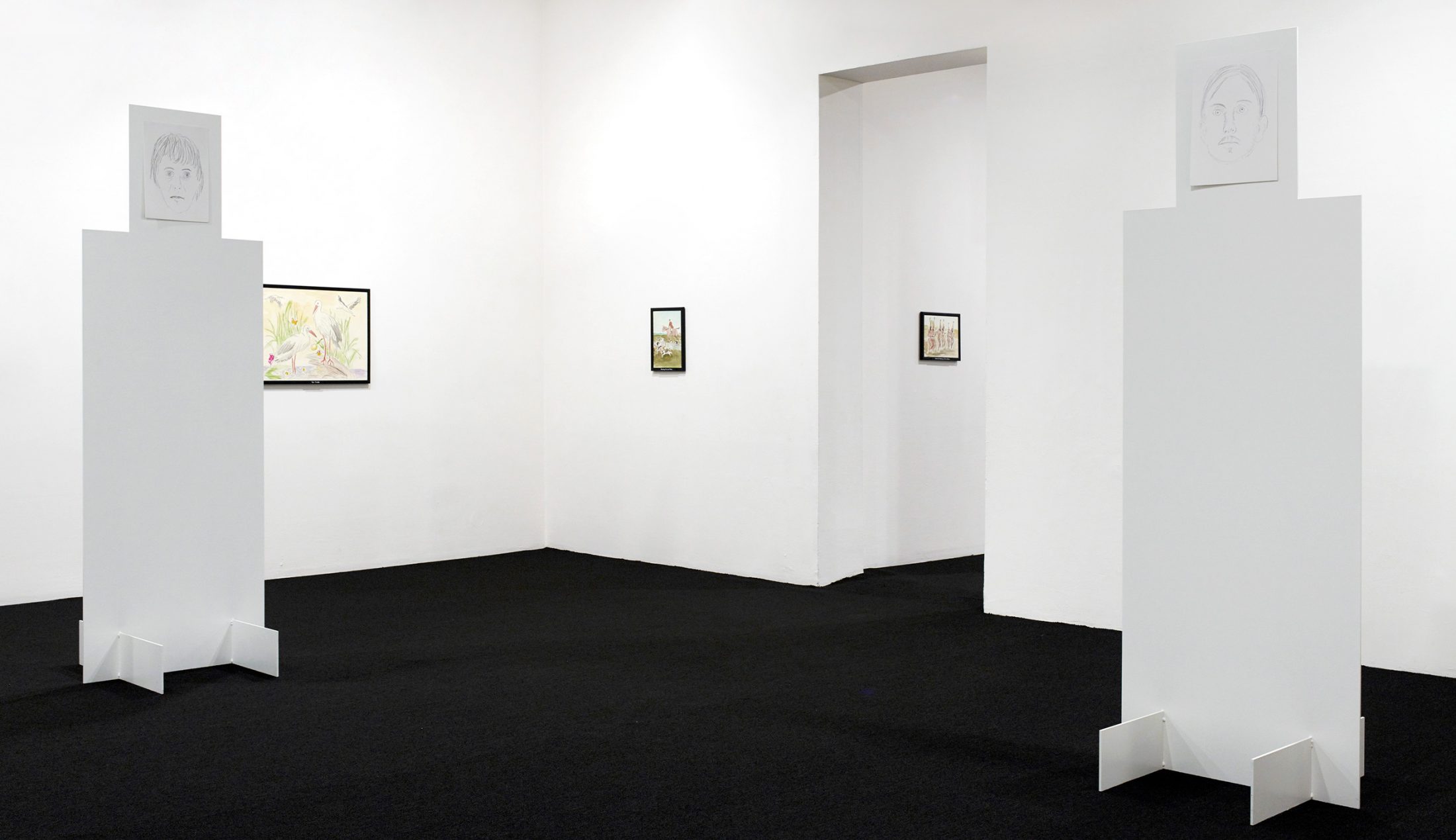 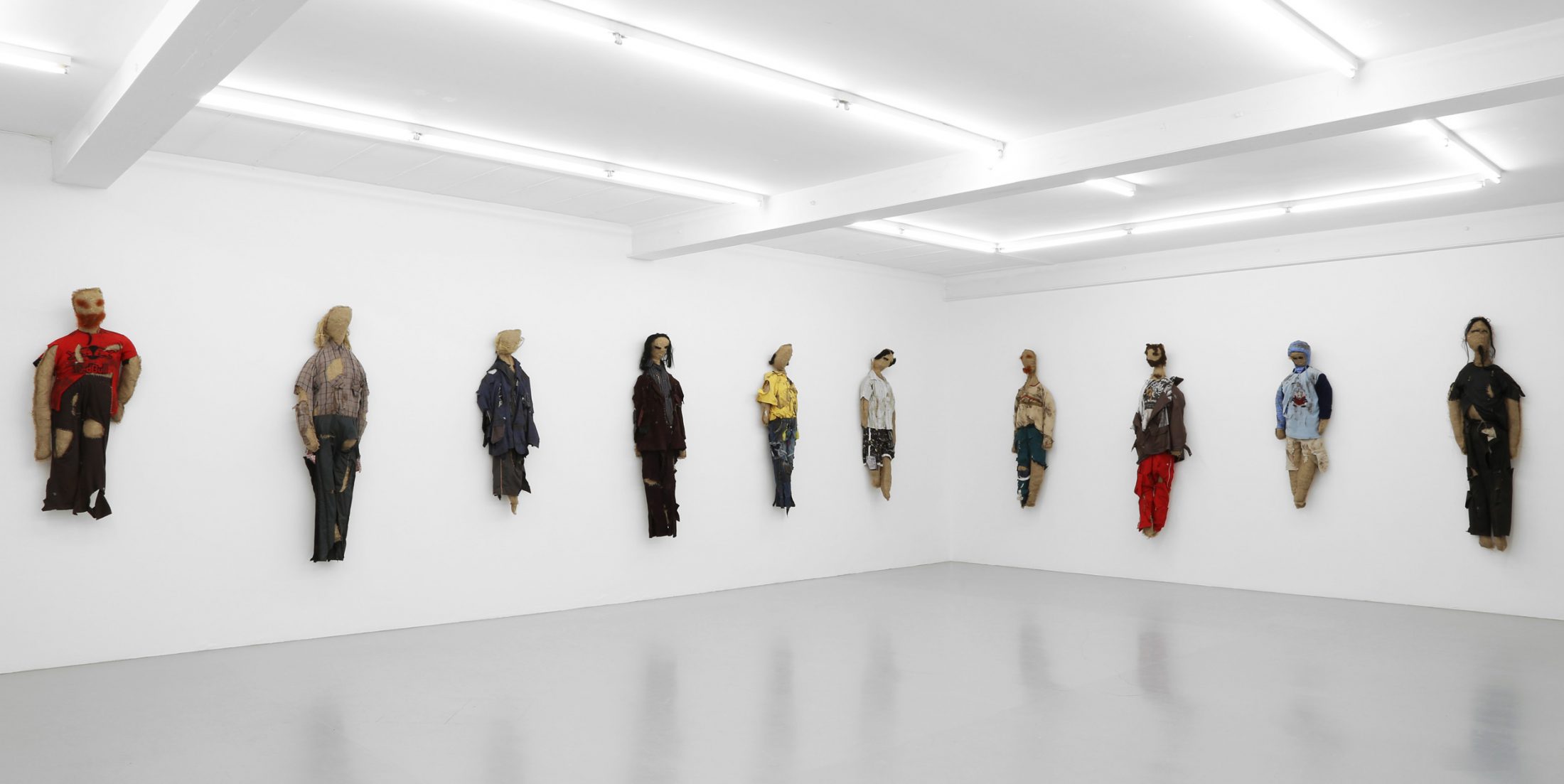 After 30 years of collaboration, de Gruyter & Thys continue to spawn a legion of videos, drawings, sculptures, installations, performances, and photographs. These materials offer the artists vehicles, which they populate with humans and their stand-ins – stupefied family members, hysterical puppets, anthropomorphized objects. Some of these characters are friends, or intermediaries that serve in their place. Others are the derelict occupants of a ‘parallel world’ that goes unrecognized by most, despite its being inexorably entangled with the world most of us identify.

Sometimes their work is perplexing, but the hushed laughter it elicits is tuned to a rather dark station. After all, or overall, the artists wallow in the most depressing of cultural trenches, in the most vile historical quagmires and, when they emerge – indelibly soiled in the moribund and strange aspects of humanity, its absurd technological prosthetics, its endless neuroses and traumas – they wring it out and give it a frozen form, a more appropriately awkward posture.

Years ago we saw them for the first time, in the station of L. They were drunk and held each other firmly. Their pants hung low and their shirts were full of stains. They made jokes about trivial things. With every joke they burst out laughing and tottered. These men are in a state of total indifference. They can only make stupid jokes or become very angry. If they are angry, they may even kill their best friend. Sometimes they badly beat each other, they knock each other out and when they wake up, they forget what happened and patch each other up again. They turn up occasionally. One does not see them often. When it gets hot they sleep off their hangovers in their dens. They are more likely to appear on gloomy days, when wet snow starts to fall. Then one sees them stumble in the distance. Usually they have liquor with them. They seek each other out on the outskirts of large cities. They feel best in wastelands or dirty forests. These men are allergic to social positivism and utilitarianism. They abhor humans who aspire to physical health, labour and reasonable material wealth. They see themselves as the enemy of this. Without realising it, they rule over a subterranean kingdom. Rather no light than false light, rather a completely irrational but fully underground existence than a highly rational and scarred existence. That is their motto. 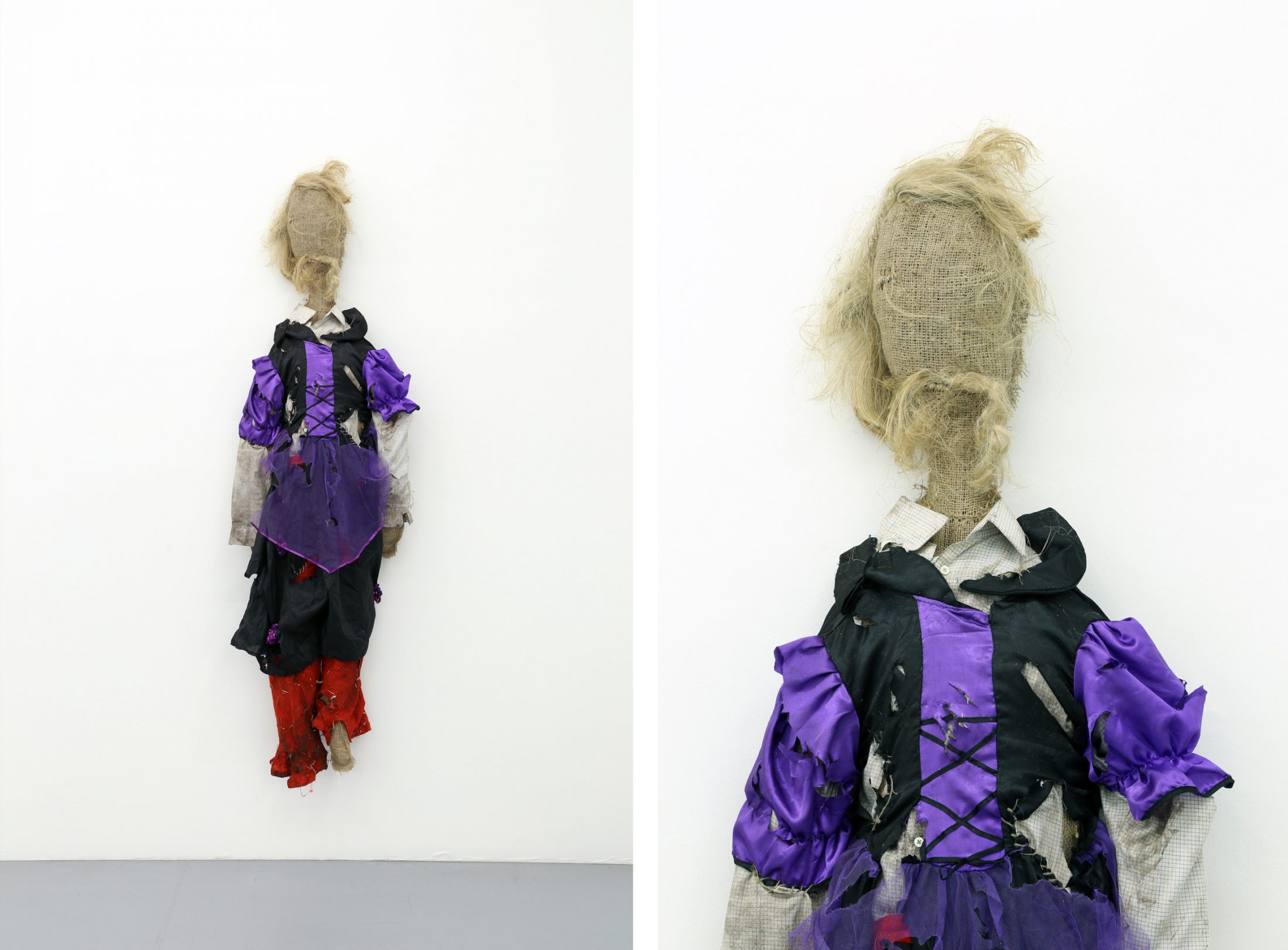 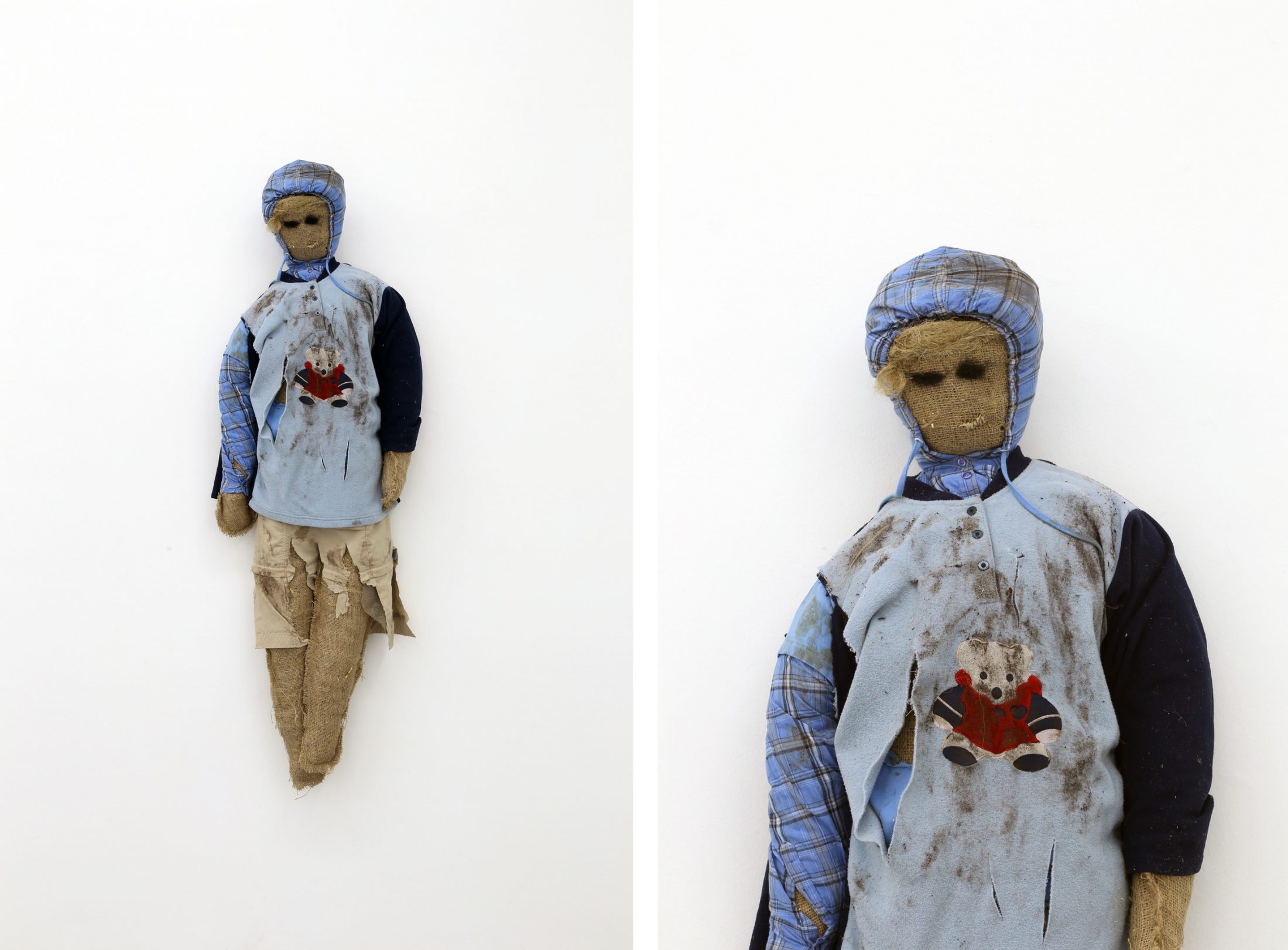 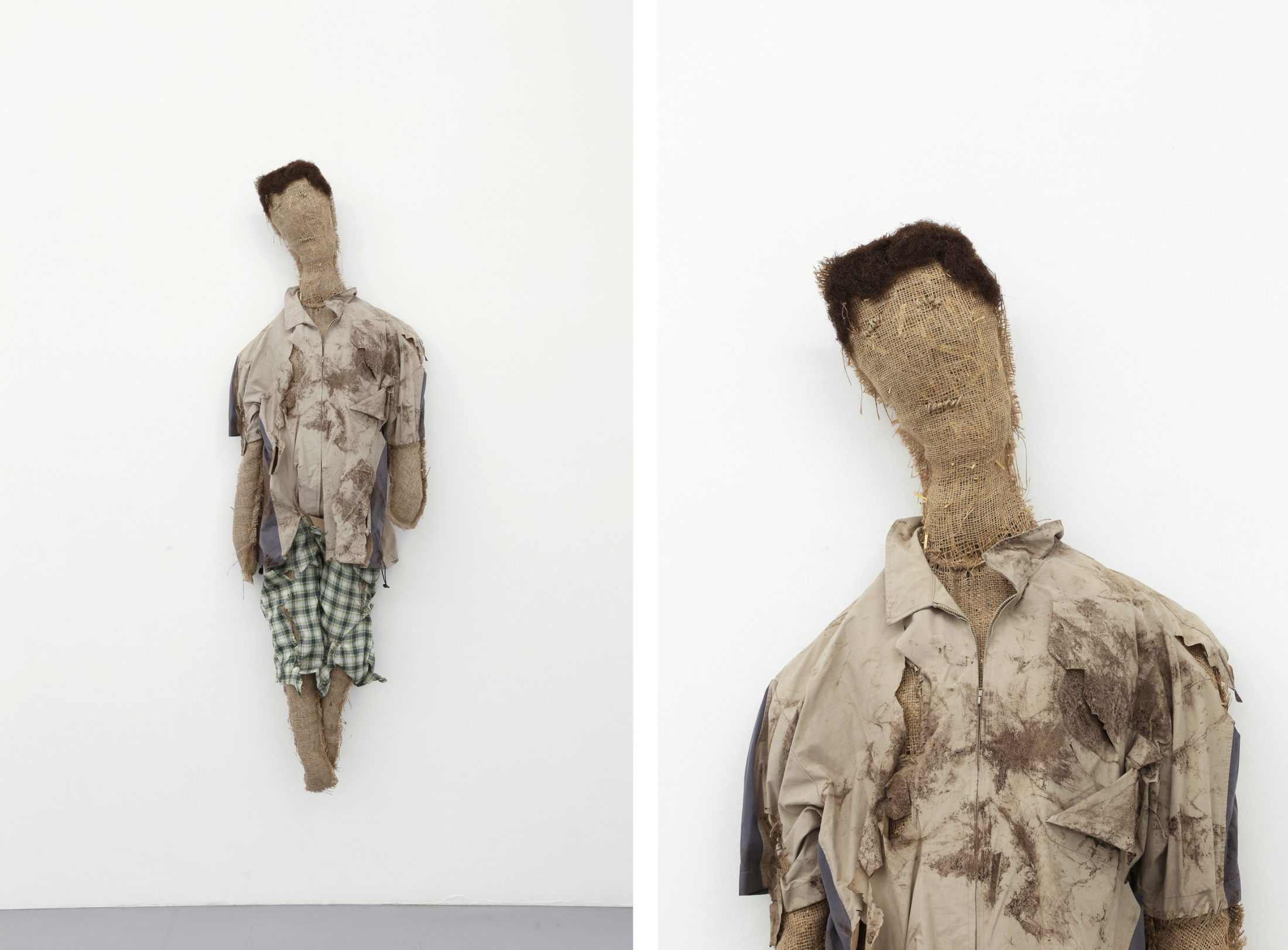 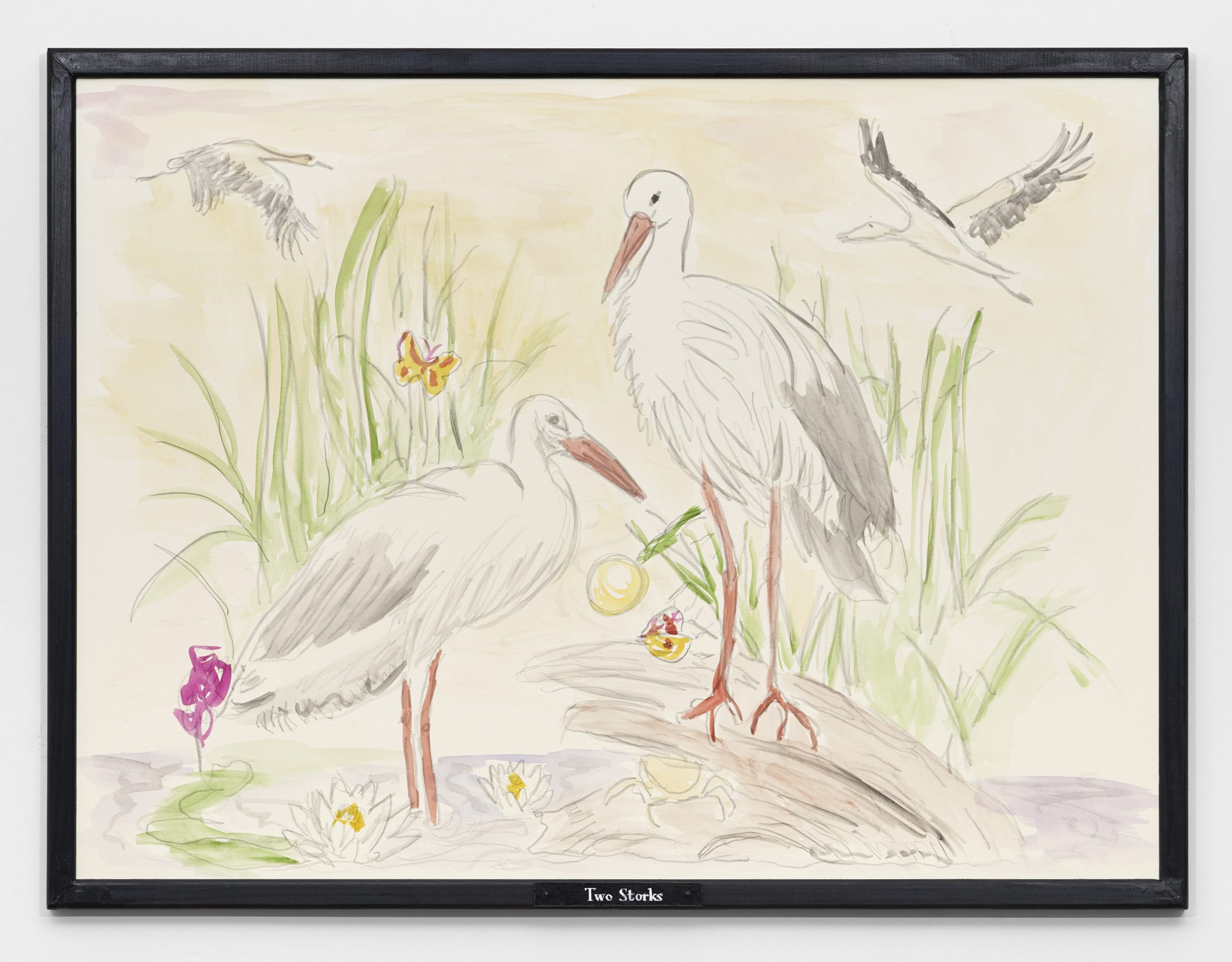 In the spring of 2015, the artists went underground for a few months. Driven by The Three Know-it-alls, they worked on an impressive series of watercolors. Each watercolor was framed in a traditional way and given a title, unlike the five hundred drawings they had made in the framework of Das Wunder des Lebens. Again, a wide range of issues were covered. Images of horses alternated with impressions of nineteenth century London, the Roman Empire, still lifes of flowers, Italian landscapes and medieval monsters. The series can be regarded as a tribute to the old world, a celebration of the metier and also a reference to the aging of Western civilization. The Western individual, who can enjoy a well-deserved retirement after years of working, often grabs a painting brush in the autumn of his life. In an attempt for meaning, this group of people paints, sculpts or creatively manages the sea of time they now possess in one way or the other. When one finally dies these works of art end up with children or grandchildren who forget about them or throw them in the trash. Fine Arts was only exhibited in its integrity in the Anglo-Saxon world because there, according to de Gruyter and Thys, the nostalgia for the past is greatest. 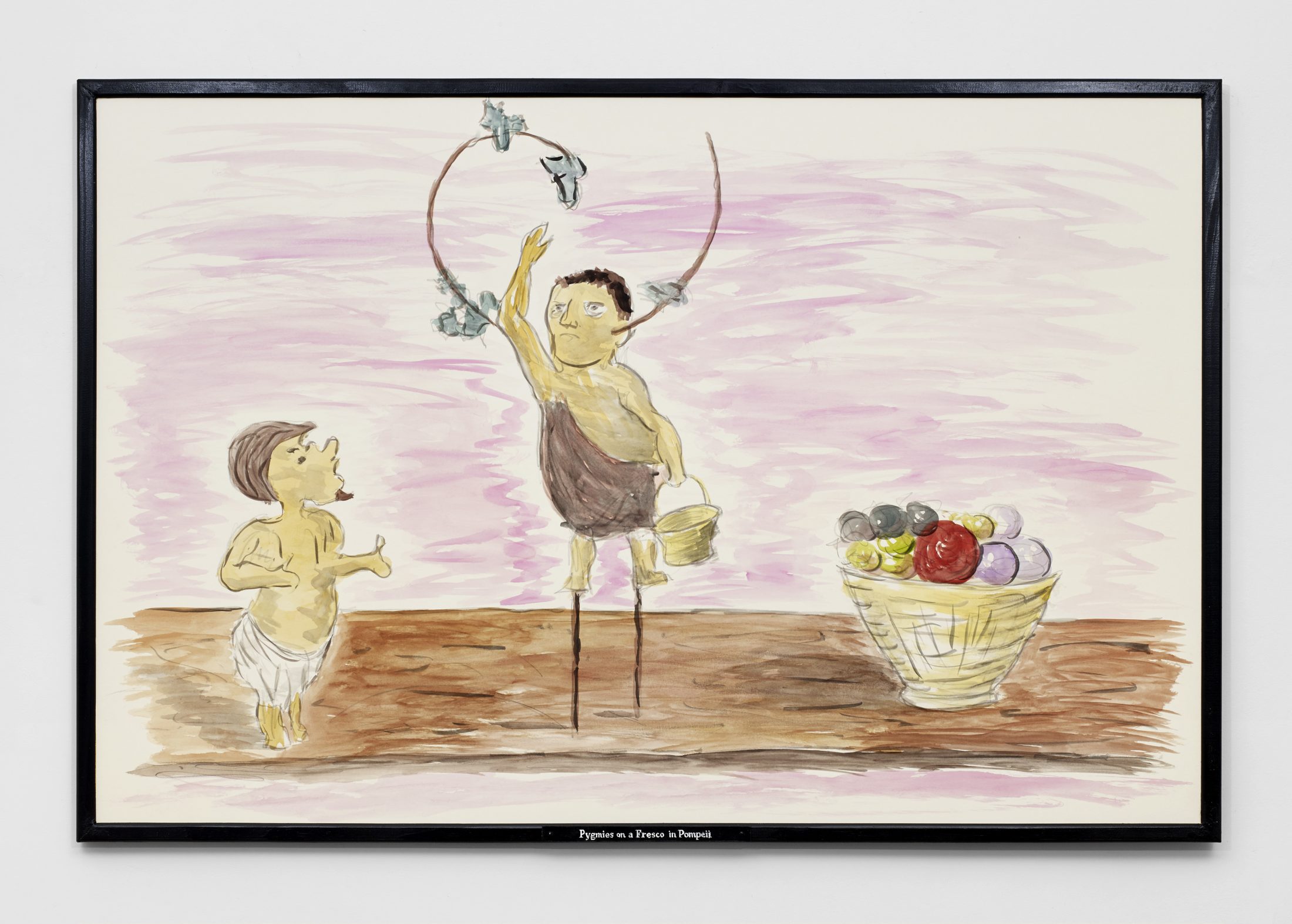 Pygmies on a Fresco in Pompeii, 2015
81 x 121 x 2 cm framed
pencil and watercolor on cardboard in wooden frame 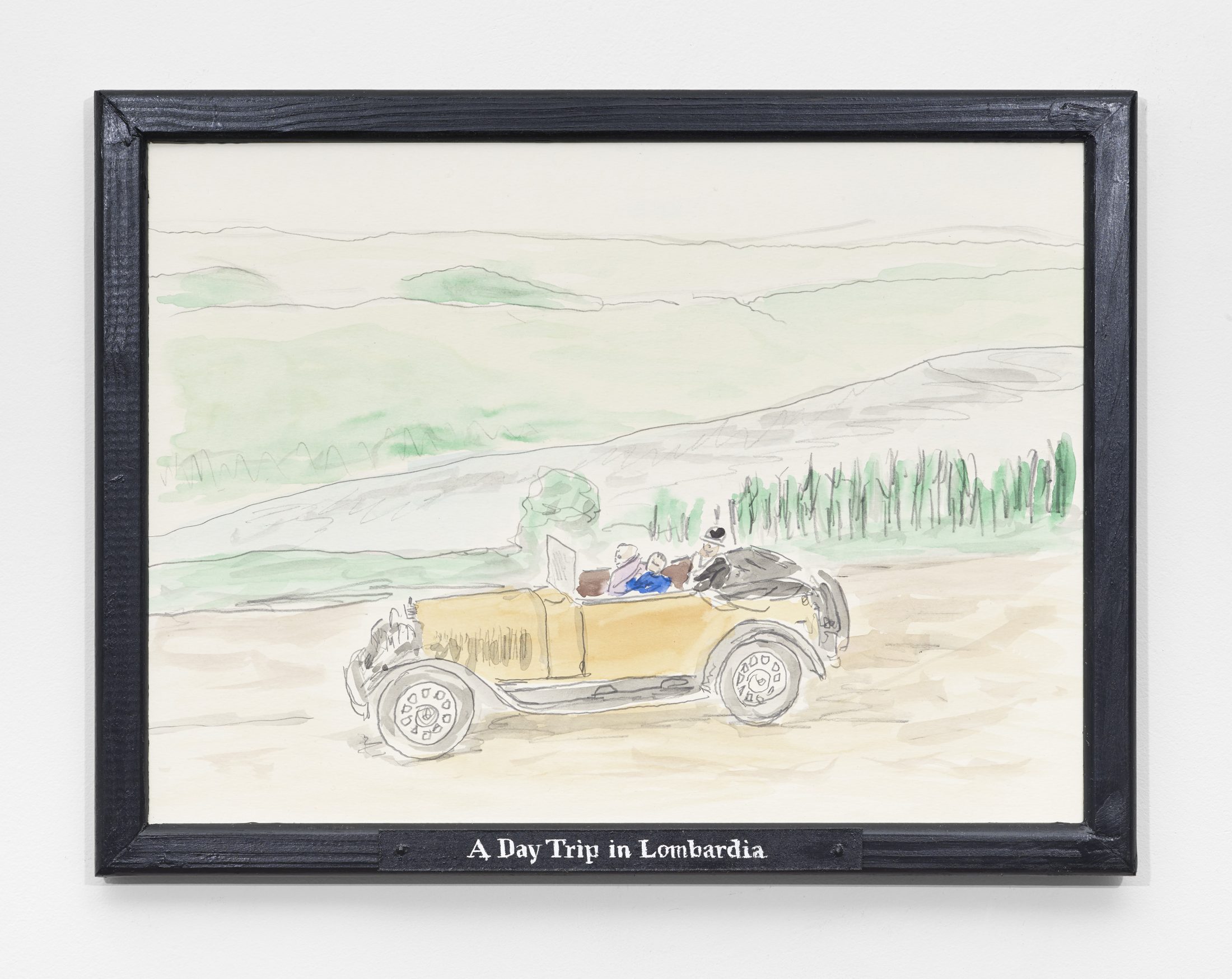 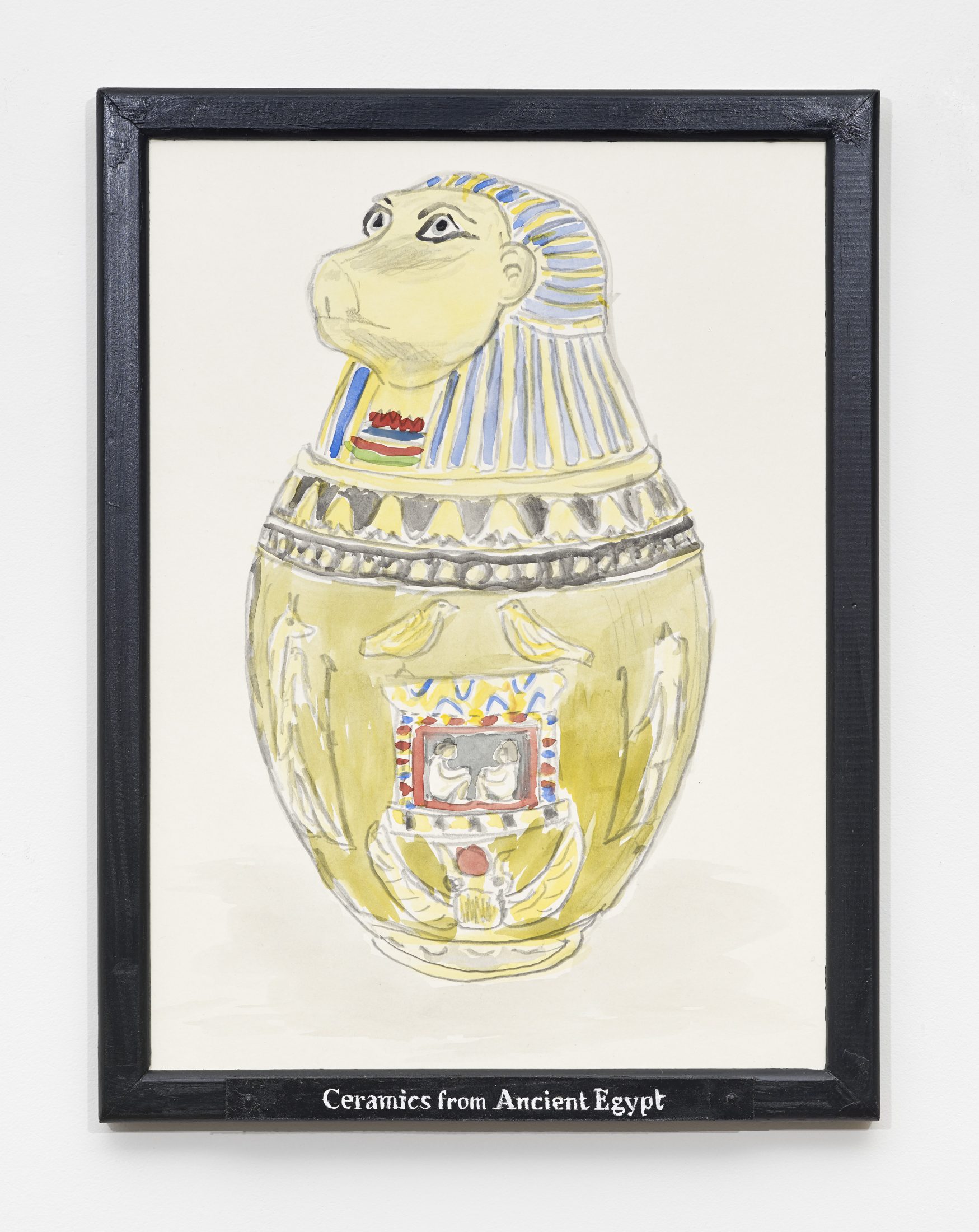 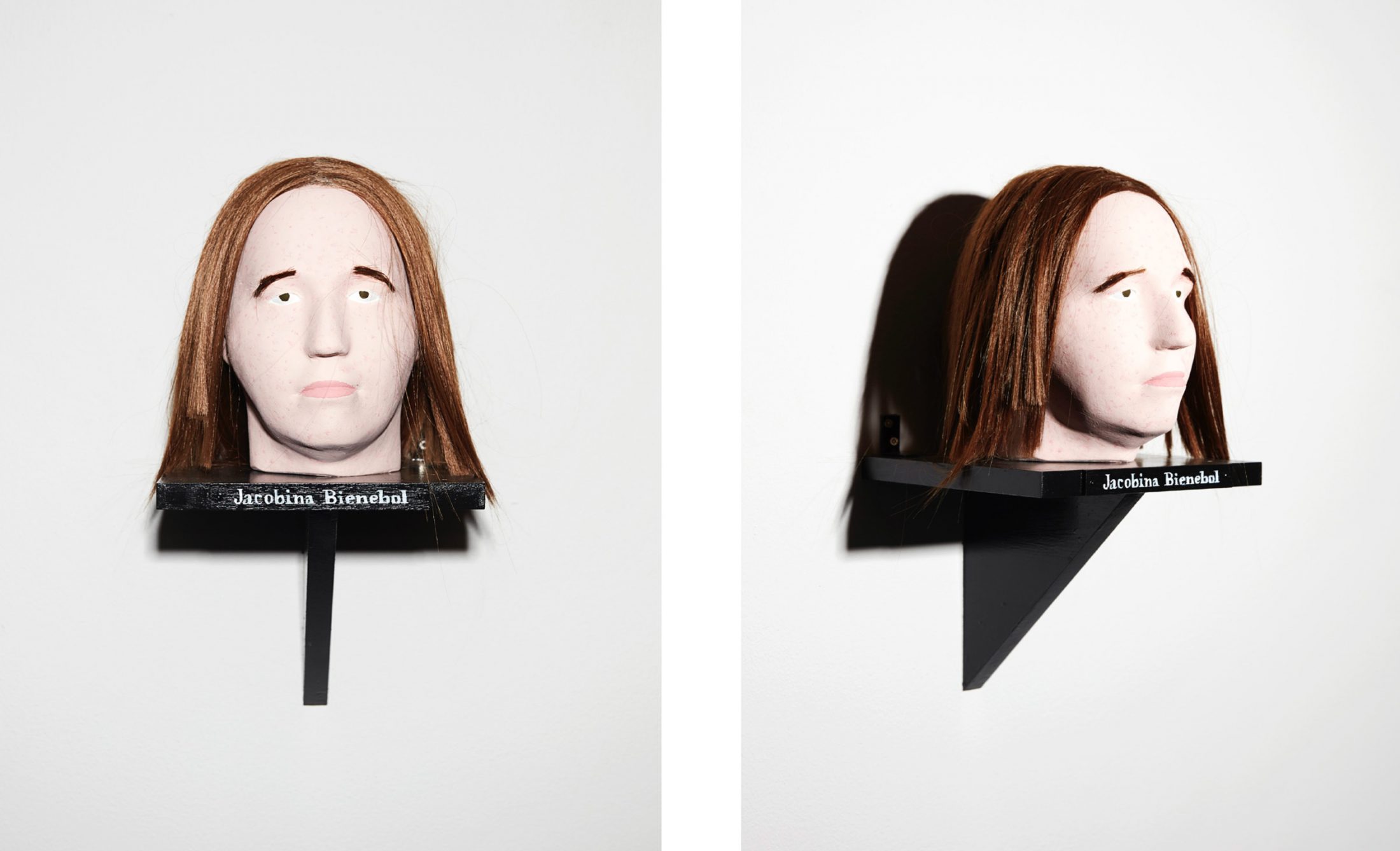 Jacobina Bienebol was brought up in a strict Protestant family in the rural town of Kruiningen. She was a preacher’s daughter. Her father, Ds. Dirk Bienebol (1922-1999), was a highly considered Minister and supporter of the Gereformeerde Gemeenten (The Reformed Congregations in the Netherlands). His twenty page treaties on the morals and traditions of the Christian Church De Tucht in de Kerke Christi (The discipline of the Christian Church) are considered as his life’s work. Since his death in 1999 Jacobina dedicated herself to the work of her father. She was repeatedly spotted cruising around Kruiningen with her bicycle preaching loudly about the values of the Reformed Congregations to other cyclists and pedestrians. She was also seen regularly disputing with the local youth. Recently, Jacobina Bienebol was sued for the abuse of a lost dog. The animal was found by hikers, it had been tied several days to a block of concrete and was completely exhausted. Under the block, a copy of De Tucht in de Kerke Christi was found wrapped in cellophane plastic. Jacobina Bienebol claimed to have nothing to do with the case. The dog had to be euthanized by a veterinarian. 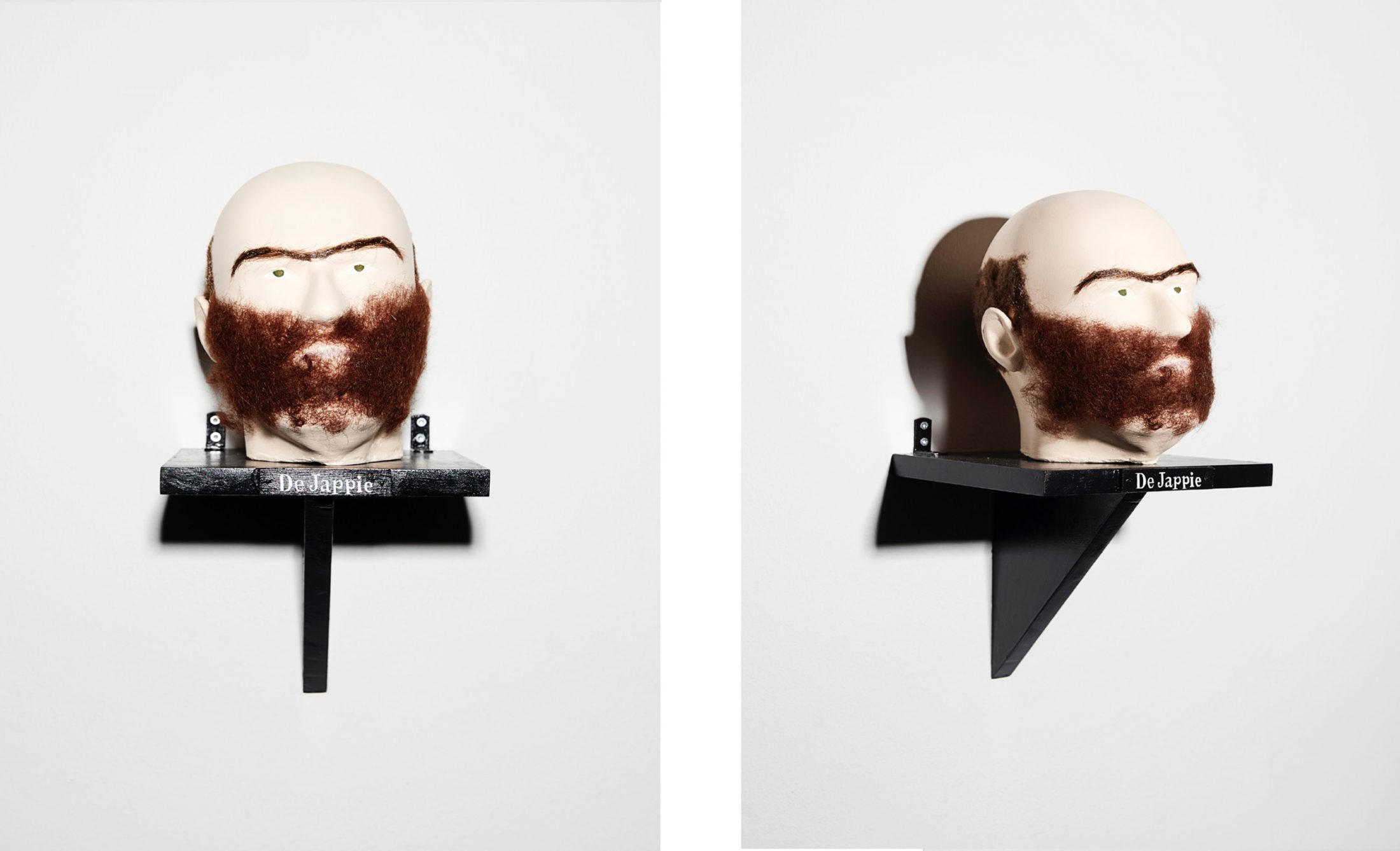 De Jappie grew up in the outskirts of Antwerp, close to the Schelde river. He did not know how to relate with others and could only shout or hit. Many people were beaten up by him. He also had the compulsive habit of spitting on the floor when he shouted. Needless to say, these habits became much worse when he was drunk. He was always surrounded by a group of ‘friends’ who were forced to laugh at his sexist jokes. One of these ‘friends’ was Abdou le Fou. 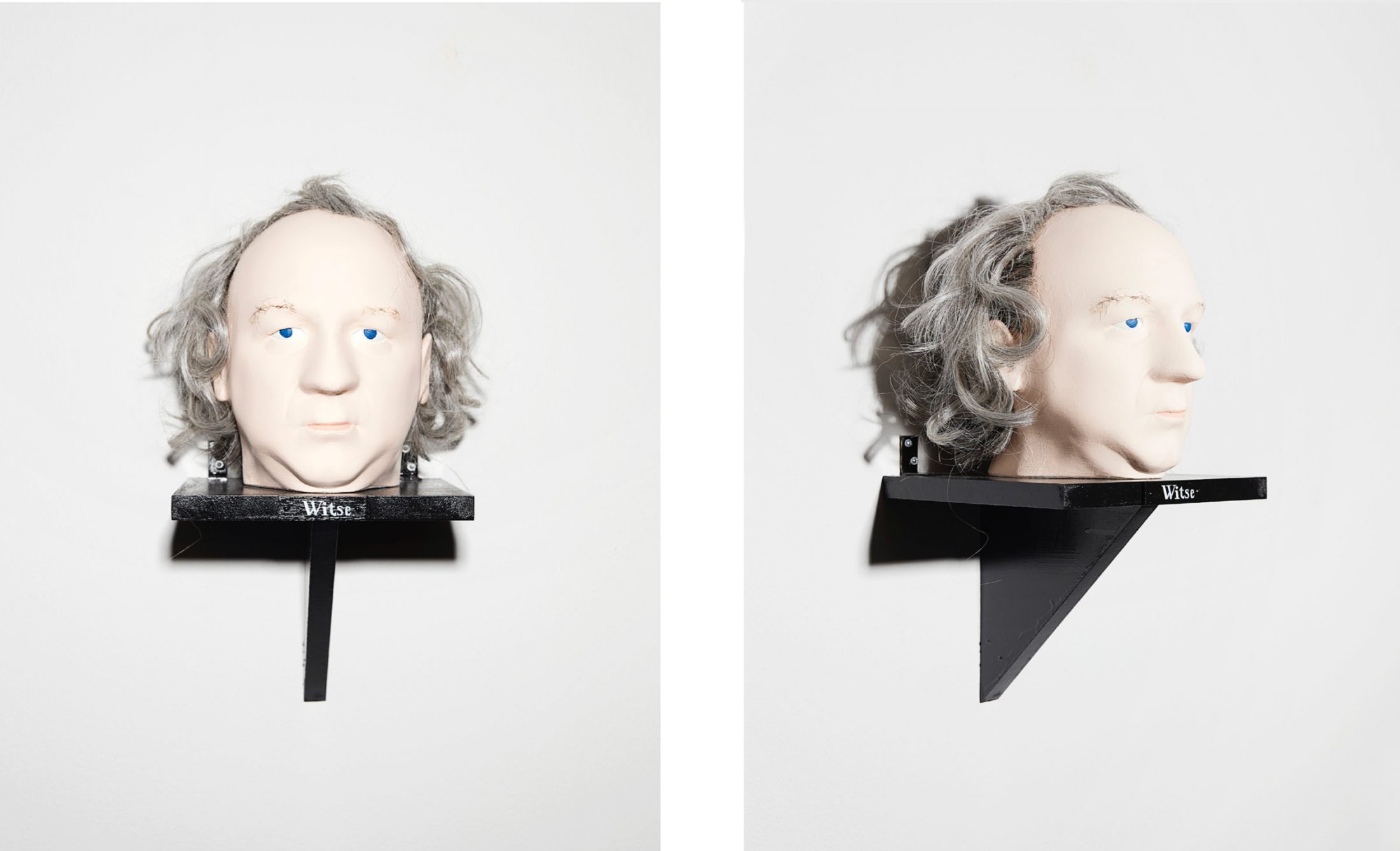 Hubert Daemen is a Belgian character actor performing under contract to the National Broadcasting Network. He’s best known for “Witse”, the main character in a series about a Police Inspector mainly active in the neighbourhood of Halle and the Flemish region around Brussels. Thanks to his lifelong contract with the National Broadcasting Network Witse is considered a civil servant. He’s not concerned with mediocre performance as he’s protected by the trade unions. In this position, Witse allows himself to abuse the film crew whenever he’s in a bad mood. His behaviour often takes tyrannical forms. Once, he attacked and heavily assaulted an intern on the film set because his coffee was too hot. The trainee filed a complaint for aggression and abuse at the National Broadcaster but, in reaction to this, Witse’s supporters in the trade unions threatened a general strike. The intern was fined and fired. Witse’s filming takes about three times as long as a typical TV-series because Witse strictly complies with the regulations of the contract he signed with the trade unions and the National Broadcasting Network. At 4pm the day wraps. Evenings and weekends are paid double. The catering on set must be organic, fruits and vegetables must only be of local origin. Witse earns 7,000 Euros net per month. His benefits also include a car and meal vouchers. 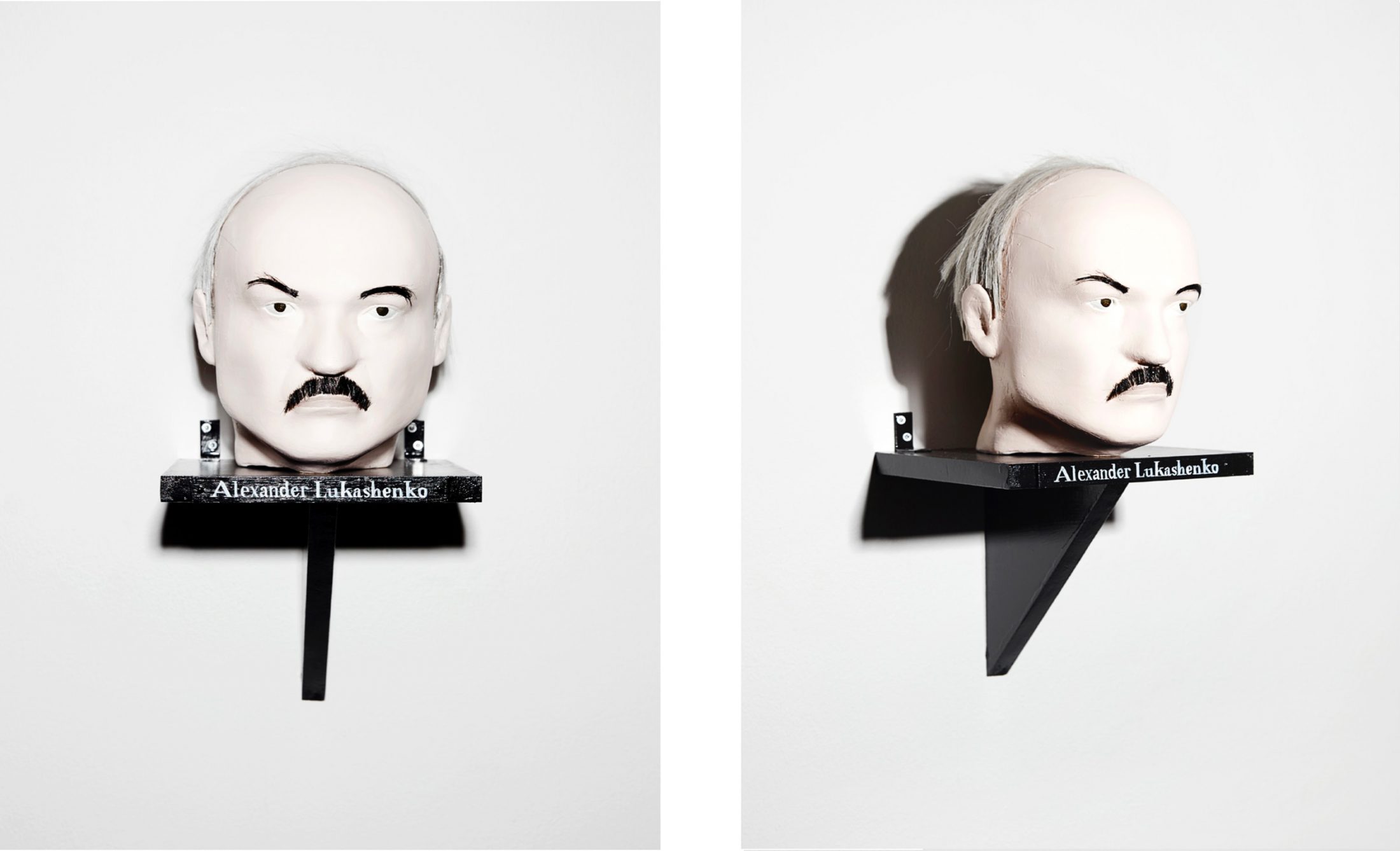 Alexander Grigoryevich Lukashenko is one of the most famous politicians in modern Belarus. In the past he did not belong to the Communist Party or any government nomenclature, nor did he hold any posts within the power hierarchy. In 1995, Lukashenko was accused of making a remark that was construed to be in praise of Adolf Hitler: “The history of Germany is a copy of the history of Belarus. Germany was raised from ruins thanks to firm authority, and not everything connected with that well-known figure of Hitler was bad. German order evolved over the centuries and attained its peak under Hitler.” Lukashenko believes that the president should be a conservative person and avoid using modern electronic gadgets such as an iPad or iPhone. He used to play bayan and football, but abandoned both during his presidency. He is a keen skier and ice hockey forward, who played exhibition games alongside international hockey stars. His two elder sons also play hockey, sometimes alongside their father. Lukashenko started training in cross-country as a child, and in the 2000s competed at the national level.

Because of an awe-inspiring event experienced during a casual visit to the town of Velden am Wörtersee in Austria, de Gruyter & Thys spent the next three years focused on one single form. They would define this event as ‘an orgy of the Western values’.
The event was announced as follows:
Only 3 days to go before the biggest Openair-Party in white will kick off in Velden am Wörthersee. The summer party of the Wörthersee again attracts thousands of party people to Carinthia, among them also celebrities like Armin Assinger, DJ Ötzi, Leo Hillinger, Emanuel Pogatetz and star designer Nhut La Hong, who all confirmed to come. In addition to the extensive program on the 30 meter catwalk with sexy go-go dancers, DJs, fashion shows with designers like Nhut La Hong and Martina Müller with her fashion label Callisti, we also got a few surprises waiting for you. The diverse fashion program will be rounded off by the presentation of white lederhosen by Trachten Strohmaier. All guests have the chance to take part in an exclusive photo shoot on the Seearena of the Casino where you can pose with original Playmates and a rare brand-new white Ferrari. The photo will be yours as a keepsake.

This event haunted the artists like a curse. From the event, one form was distilled: The White Element, a white metal figure that looks like a greatly simplified character and weighs 130 kilogramms. A portrait in pencil makes every White Element into an individual. The White Elements can take various forms. Small, large, curved, stacked, lying down or sitting up. Their basic shape however remains the same. So far, 1326 copies were manufactured in factories across America and Europe. The steel comes from China, Sweden, and Germany. Special models, such as Der Dikke and Der Lange, were made in a metal company in Lithuania where they still possess equipment from the period of Stalin. These are admittedly less precise than the machines we use today, yet significantly more powerful. 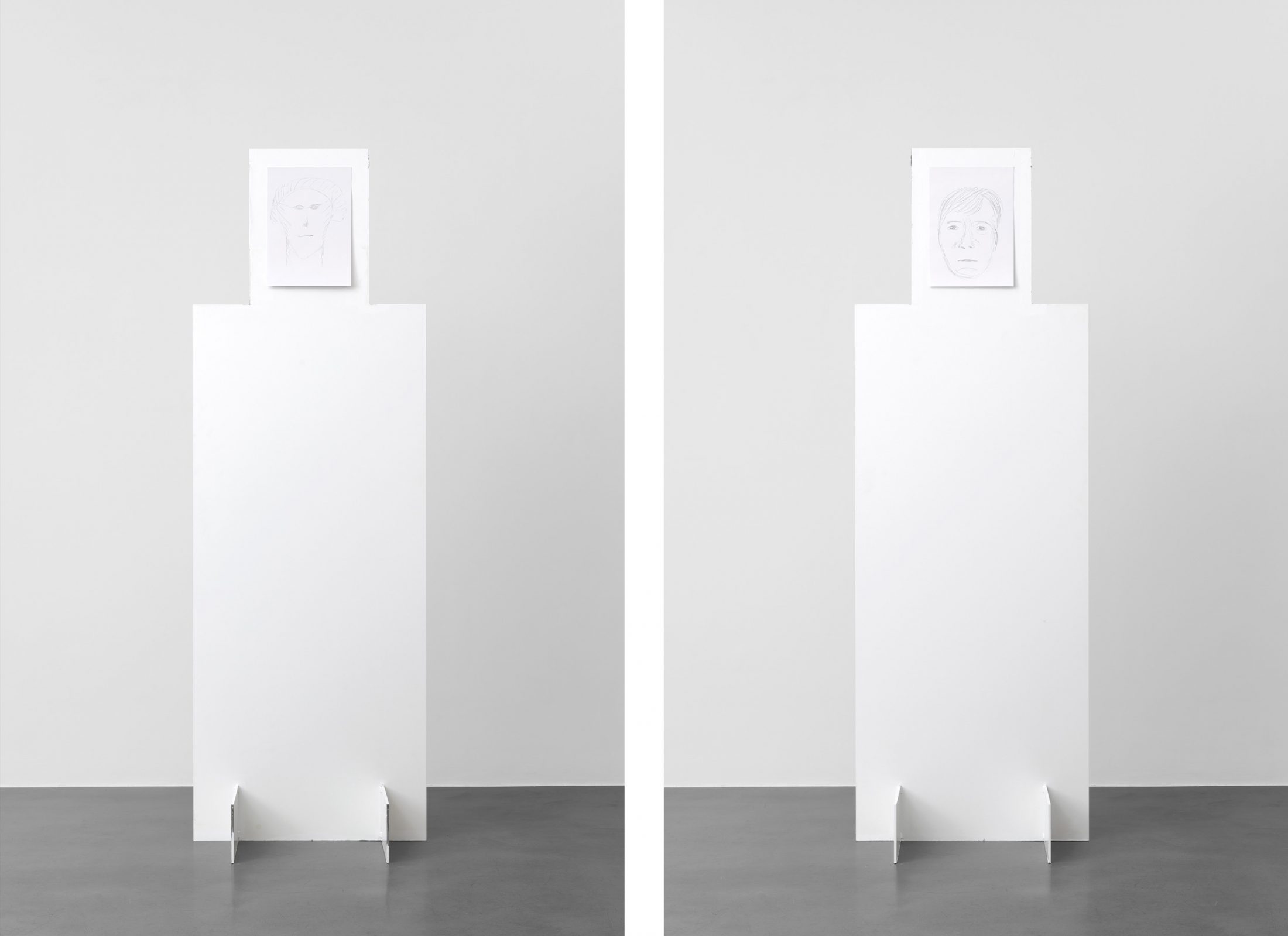