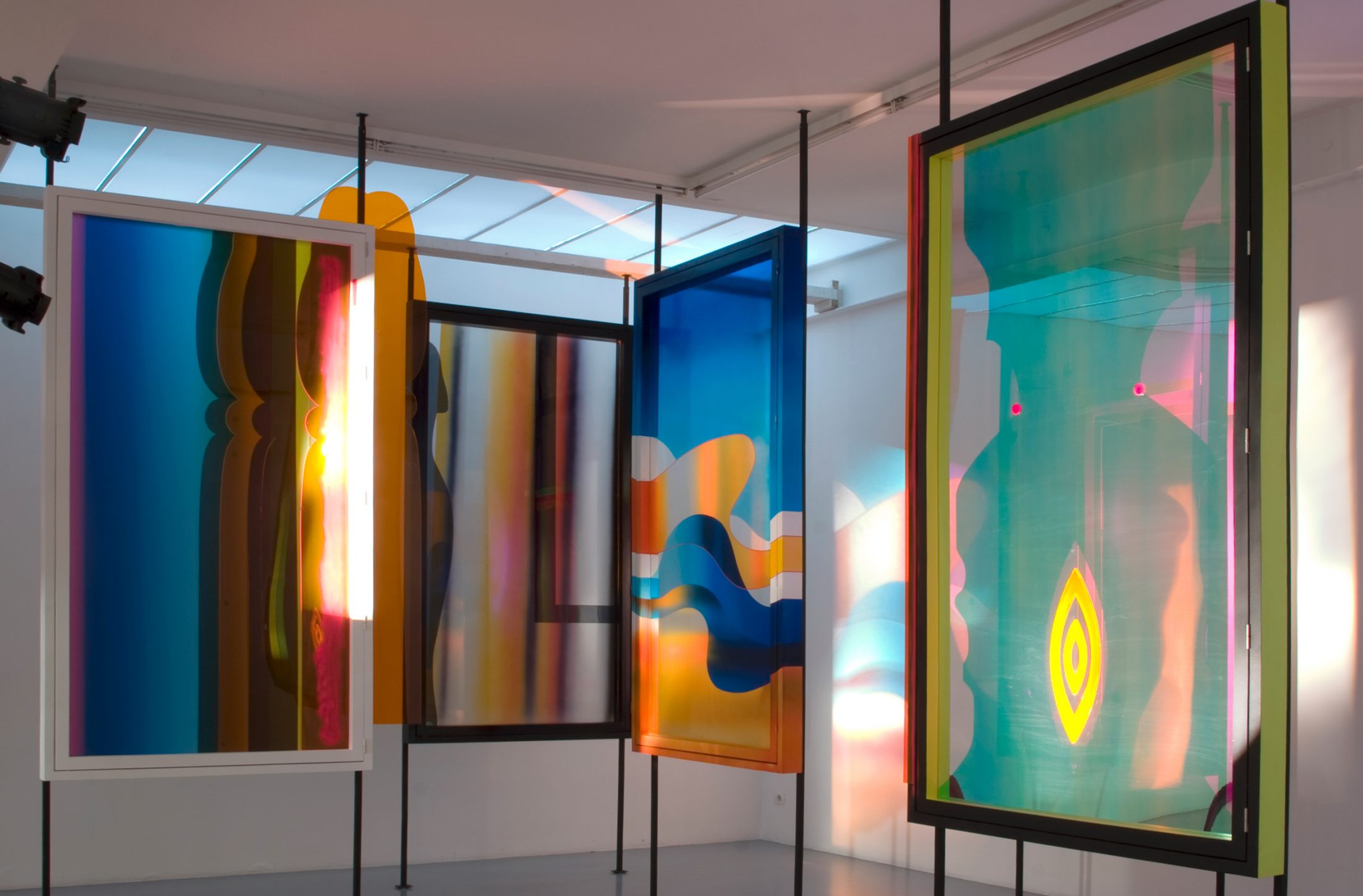 An insight into more that ten years of collaboration between the German artist Tobias Rehberger and Galerie Micheline Szwajcer.
In this online exhibition we reactivate a historic archive of groundbreaking exhibitions. 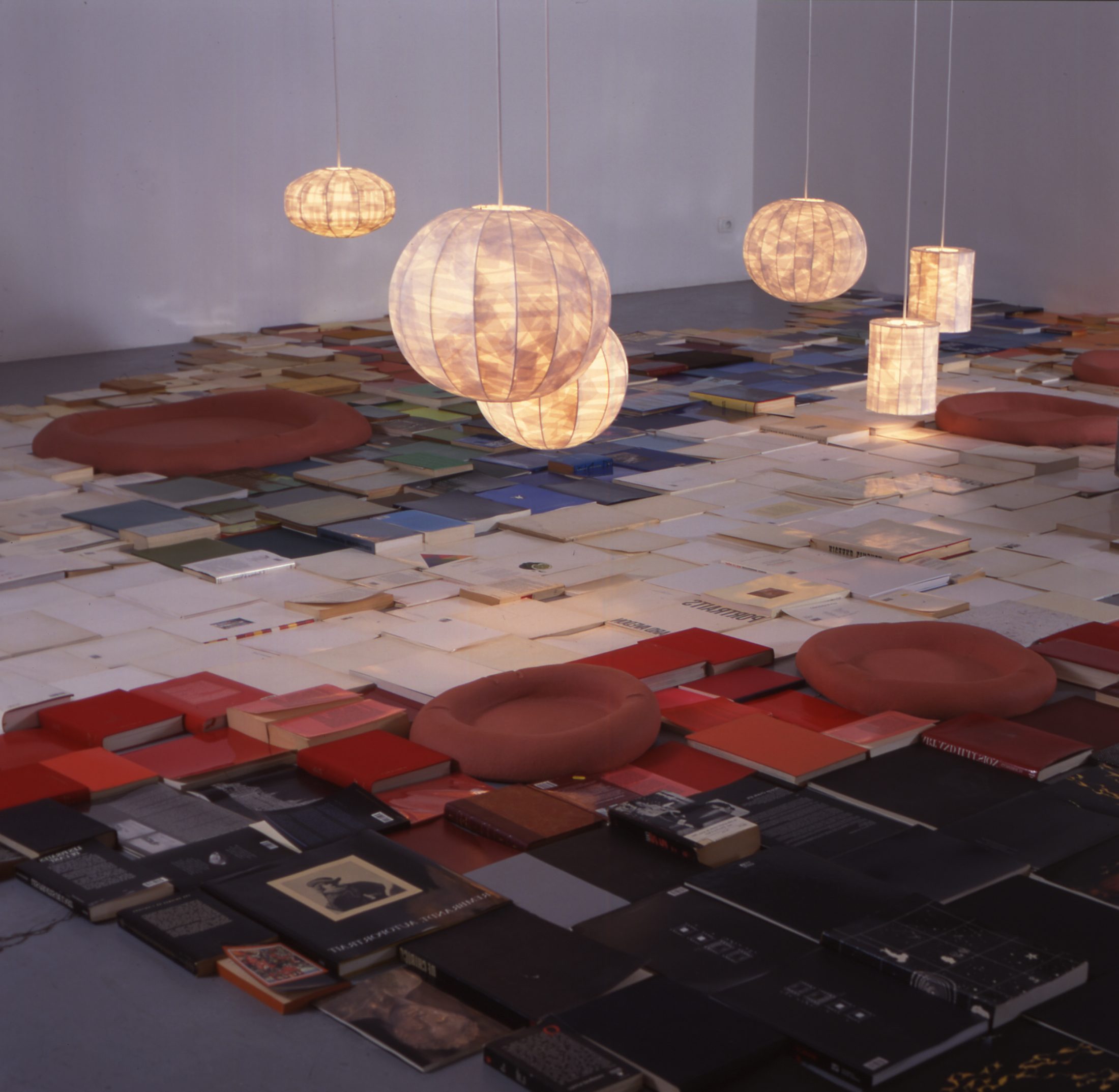 As Ralph Melcher suggests, Rehberger “uses art as a way of describing the shallows and abysses of an unreflective pursuit of life.” Rehberger’s work seeks to reveal and rethink the very processes by which notions of value and art come into being, by rejecting the legitimating role of authorship and by employing strategies of recontextualisation. Working in, or rather through, portraiture, in a series mounted at the ICA in London for a group show entitled ‘Assuming Positions’ (1997), the artist composed a series of nine portraits, asking nine friends, including fellow artists Olafur Eliasson, Jorge Pardo, and Rirkrit Tiravanija to contribute a selection of flowers, which were subsequently arranged in vases designed by the artist. In both 1996 and 1999, likewise utilizing exterior suggestion as a point of departure for his work, Rehberger rendered interior environments in the language of modernist design with sleek forms and bright, retro colouring, based on descriptive briefs from his friends concerning how they prefer to relax. The resultant works, with the group title: ‘Fragments of their pleasant spaces in my fashionable version’ and presented as arrangements of sofas and television sets, pillows and tables, carry monikers of function or intention: ‘Lying around lazy; Smoking, talking; or No need to fight about the channel’. Treading between fashion, art, and design, Rehberger’s installations deny art as expression, and demand art as context.

He uses translation and participation as a way of pointing to the determining and interpretative force of context on the perception and production of a work of art. Rehberger has ordered a series of cars to be built in Thailand on the basis of simple sketches produced by the artist. The final works, which involved significant interpretation on the part of the manufacturers, were more sculpture than automobiles. This slippage, the product of any translation, points to the gap between intention, artistic or otherwise, and reception, comprehension, production. Despite the process-oriented nature of his work, Rehberger’s art is indeed about production: creating the terms for production but not delimiting the possibilities of the final product.

Tobias Rehberger lives and works in Frankfurt. The artist enjoyed his first solo exhibition in 1992 and over the past few years, major solo exhibitions have been presented in prestigious museums in London, Germany, France, Portugal and the USA. His 2006 solo exhibition at Haunch of Venison was entitled ‘Seven Naked Herman Hesse Fans and other Gems’. He had a major success at the Venice Biennale (2003), and has been included in important international surveys of contemporary art such as Sculpture Projects Münster (1997), ‘Rooms with a View: Environments for Video’ at the Guggenheim in New York (1997) and Manifesta 2 in Luxemburg (1998). 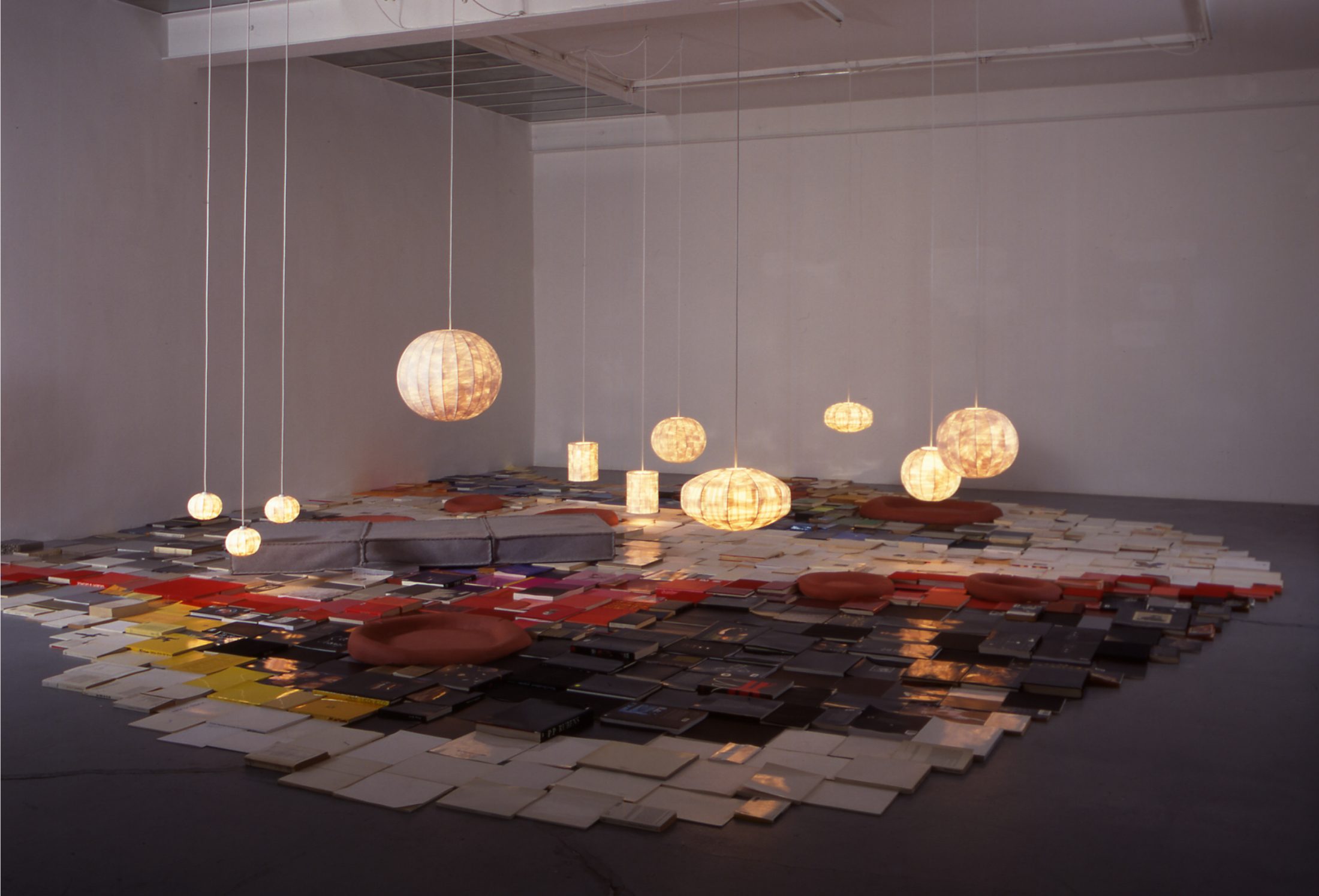 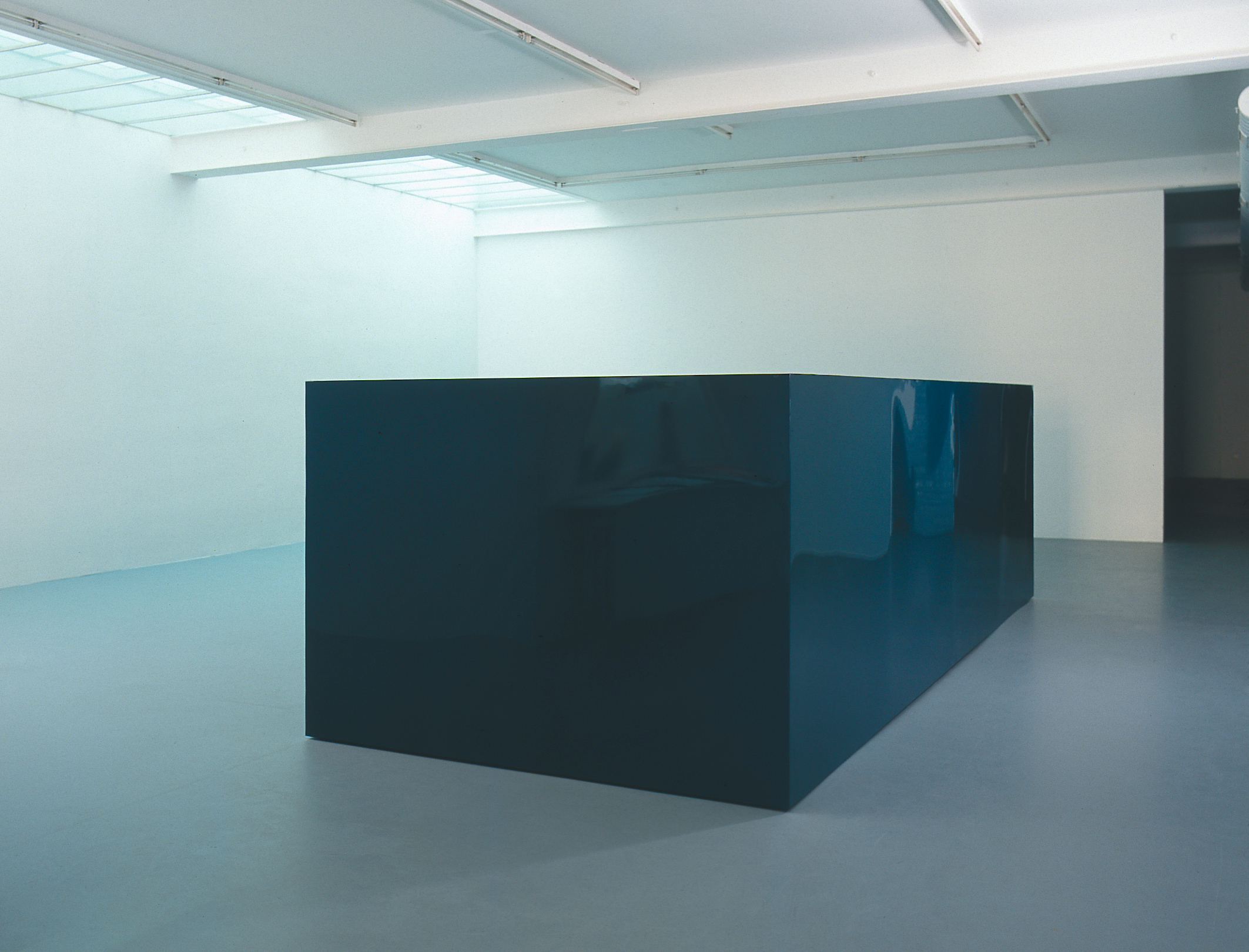 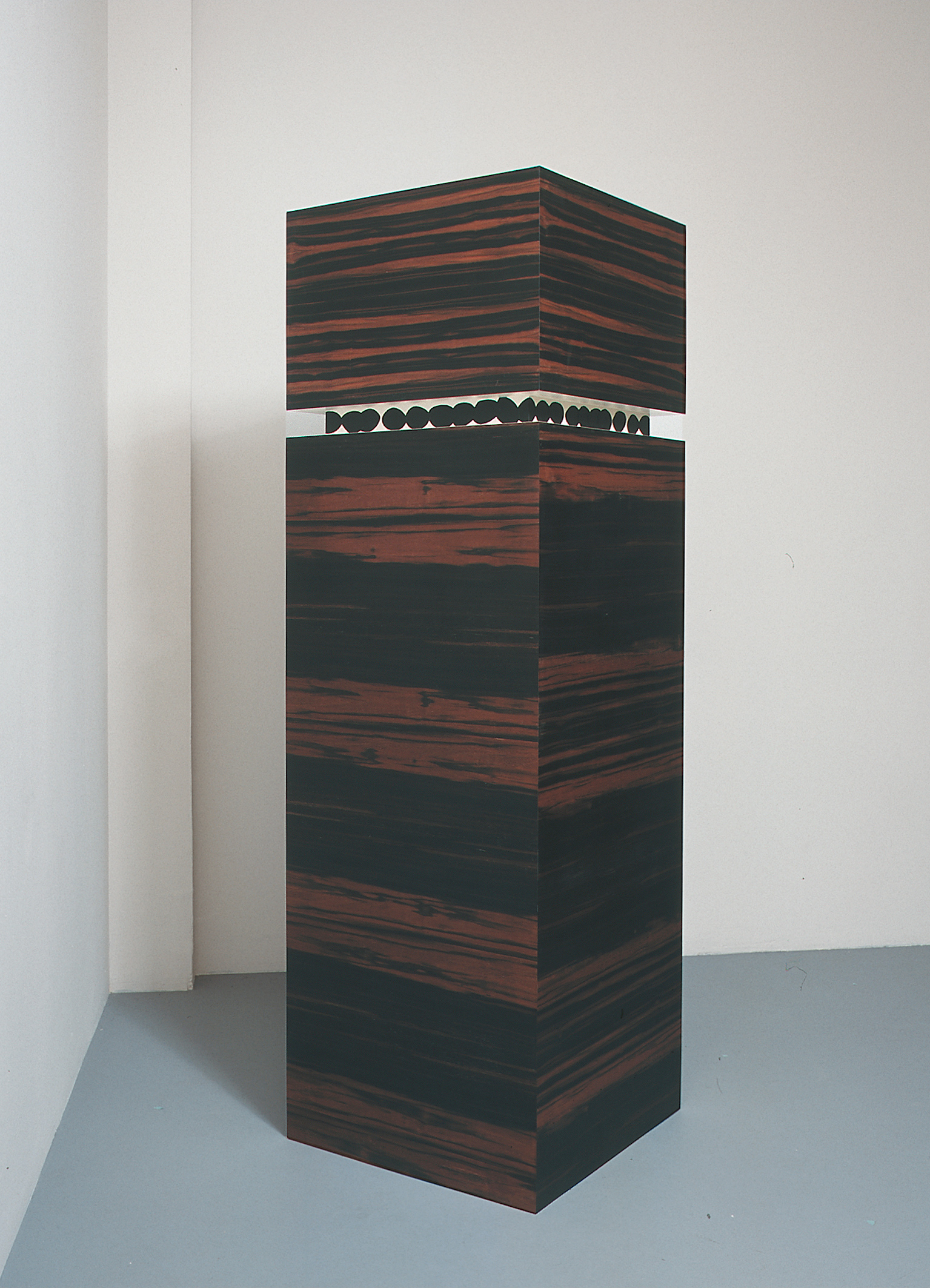 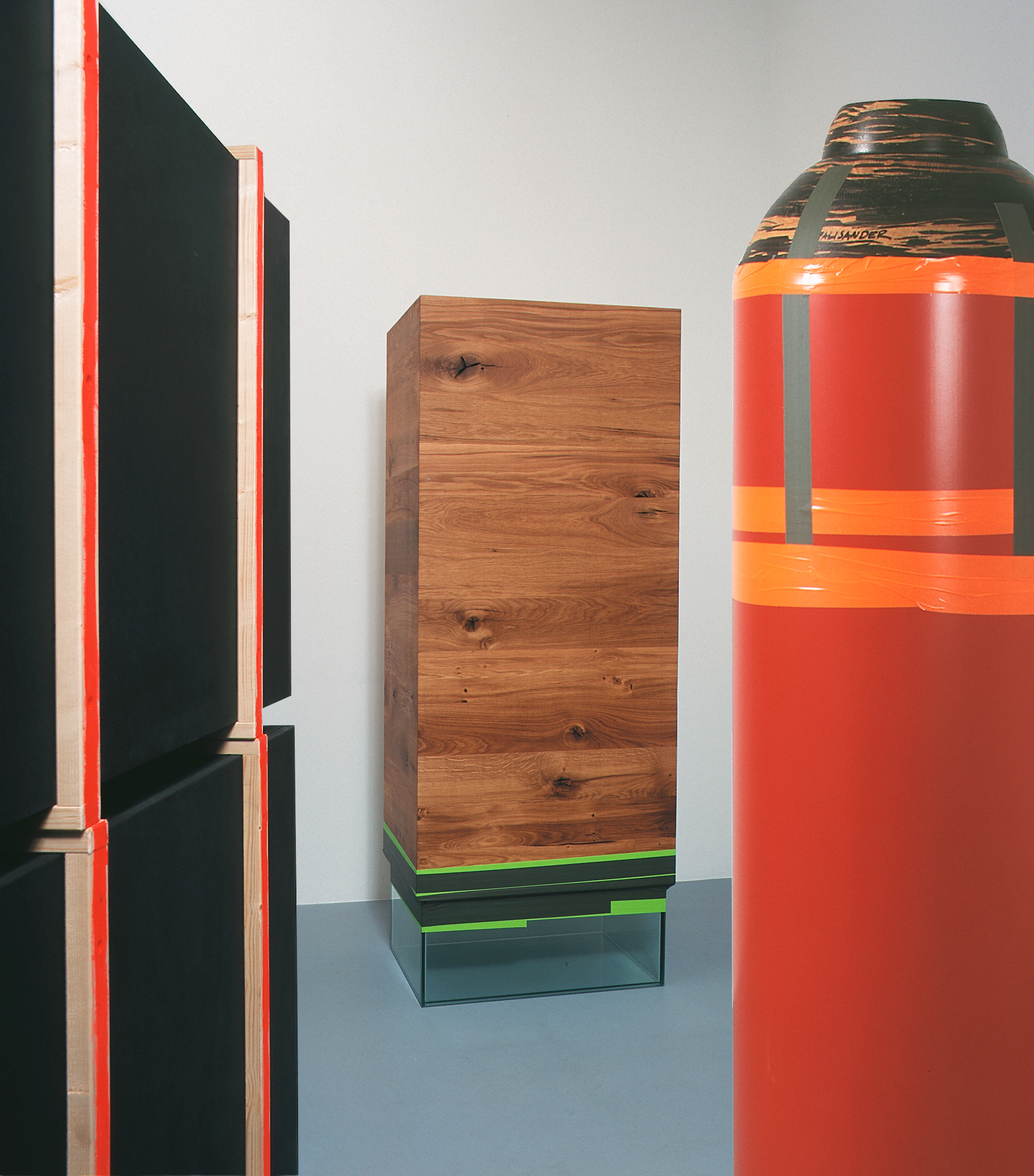 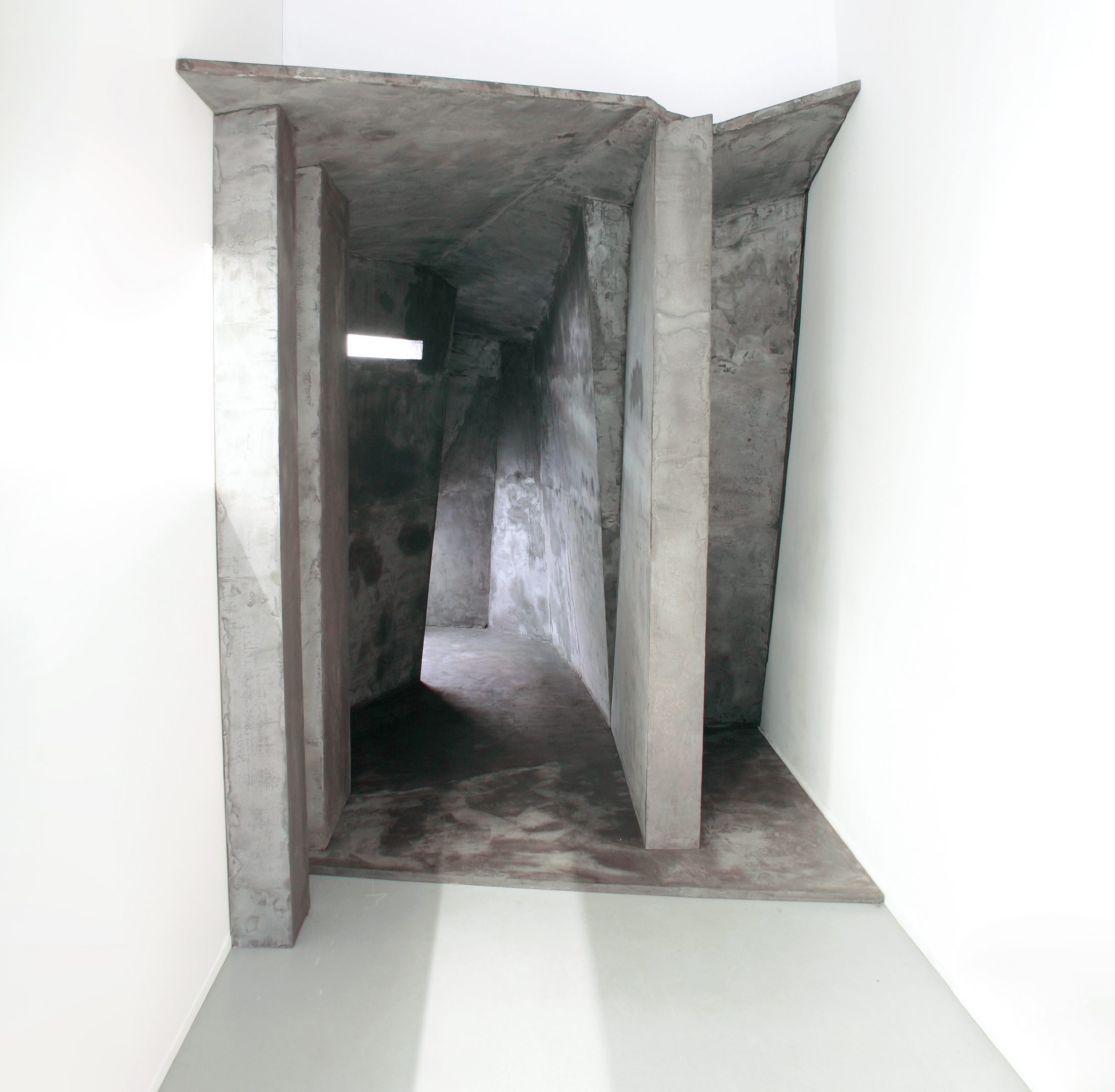 The work of Tobias Rehberger (°1966, Esslingen) holds middle between art, design, publicity, fashion and architecture and often manifests itself as installations in a (public) space, which influence our experience of the space and stress the interaction between people.

In the front part of the gallery Tobias Rehberger builds a bunker, based on the bunker he owns with Olafur Eliasson in Berlin. The bunker is not an exact reproduction of the original space in Berlin but a re-interpretation, based on the principles of stealth design, which is normally applied to keep airplanes and ships out of radars’ reach. Visitors who enter the gallery automatically find themselves inside the bunker. In order to enter the rest of the gallery space, they have to leave the bunker through the emergency exit.

Metaphorically speaking, the front part of the gallery and the whole world are inside the bunker and only the rear part of the gallery is actually outside of it.
In the backspace of the gallery, visitors will find several wall-mounted compositions made from the material that was left from the production of the sculptures that Tobias Rehberger currently presents in his exhibition “I die every day. 1 Cor 15,2” in Madrid.  All the sculptures in Madrid are sculptural re-interpretations of projects that had failed to be realised. Now, what is left from the realisation of the non-realised projects will be turned into new “classical” wall-pieces. Thus explaining the title of the exhibition “Negatives of a daily death”. 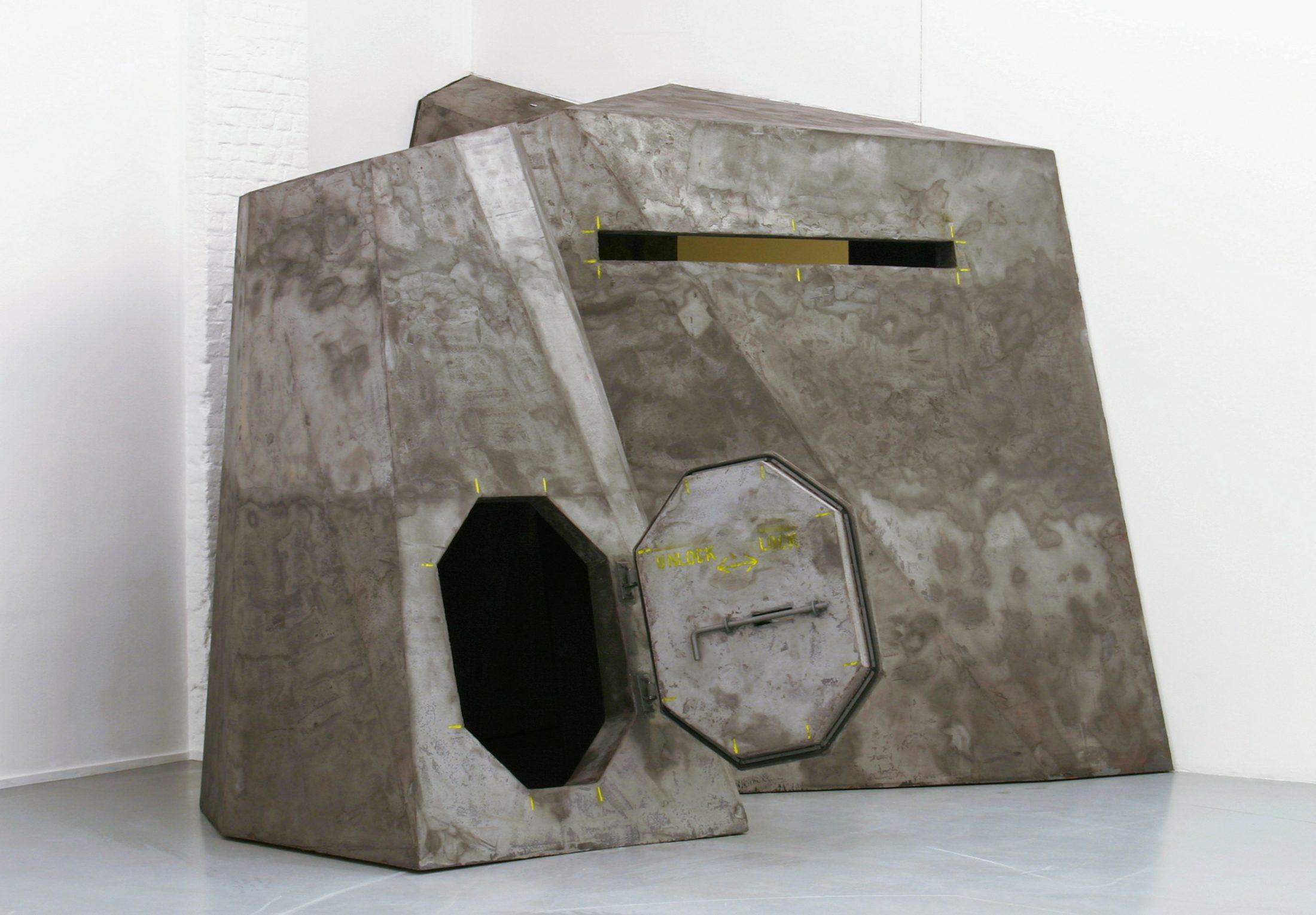 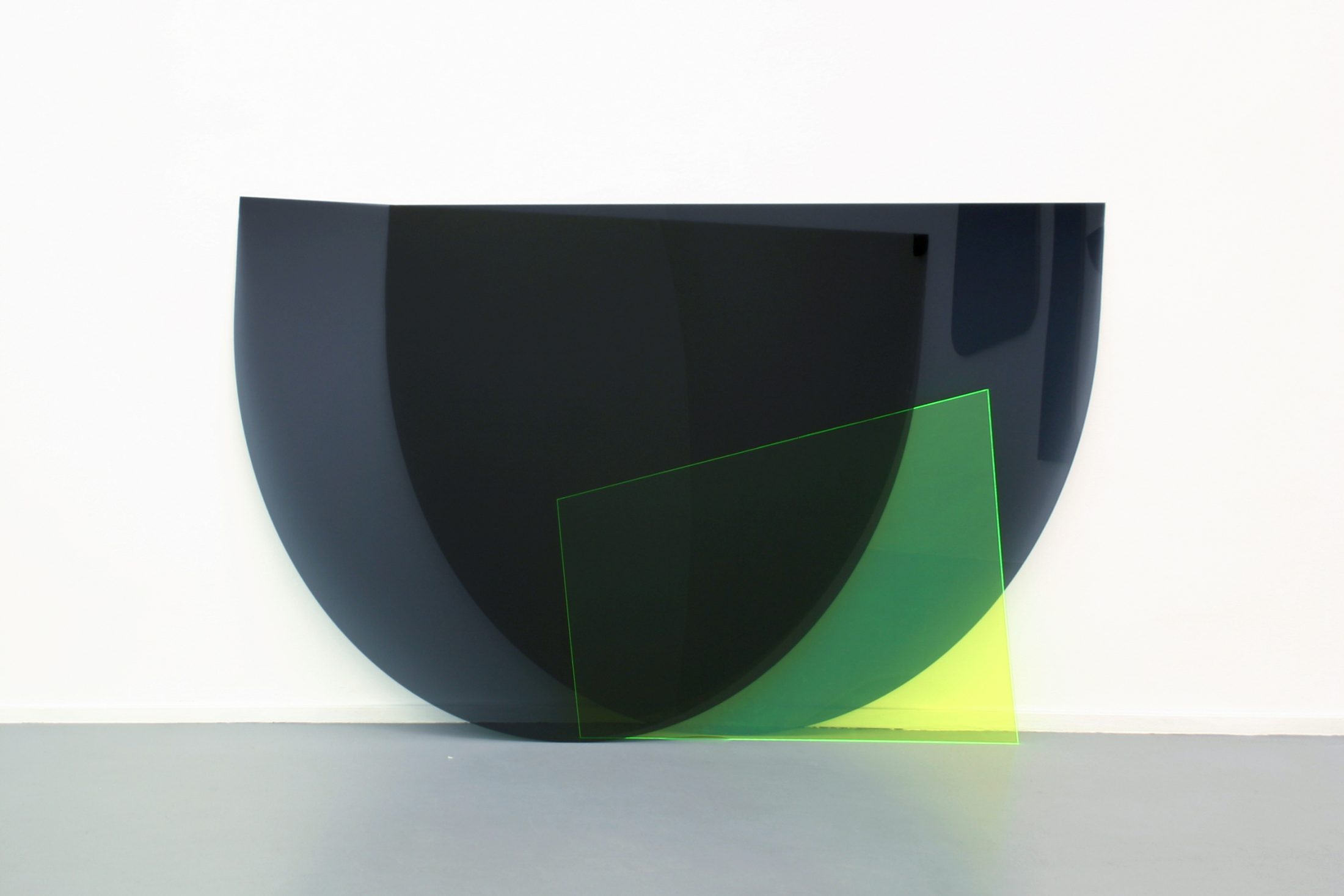 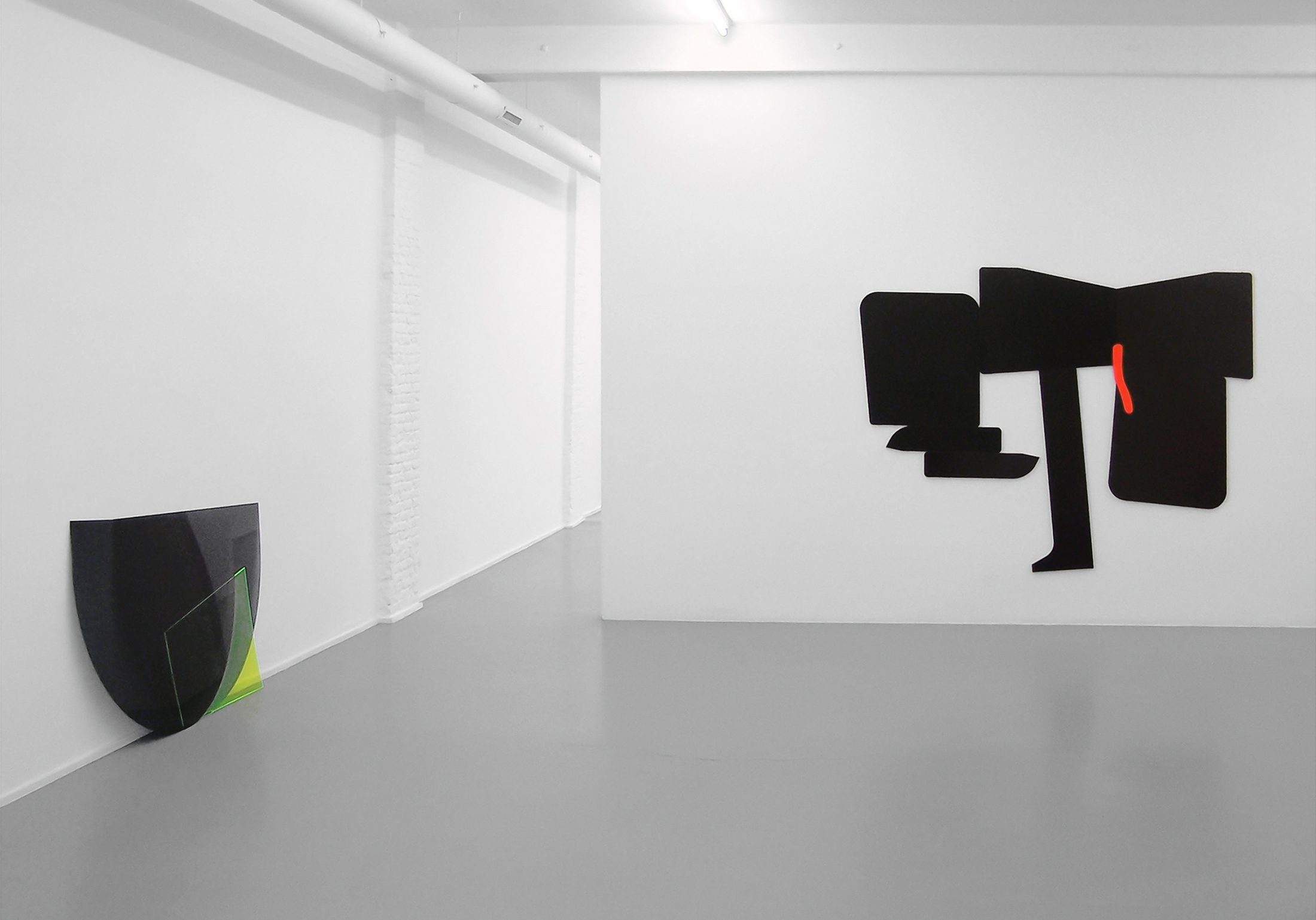 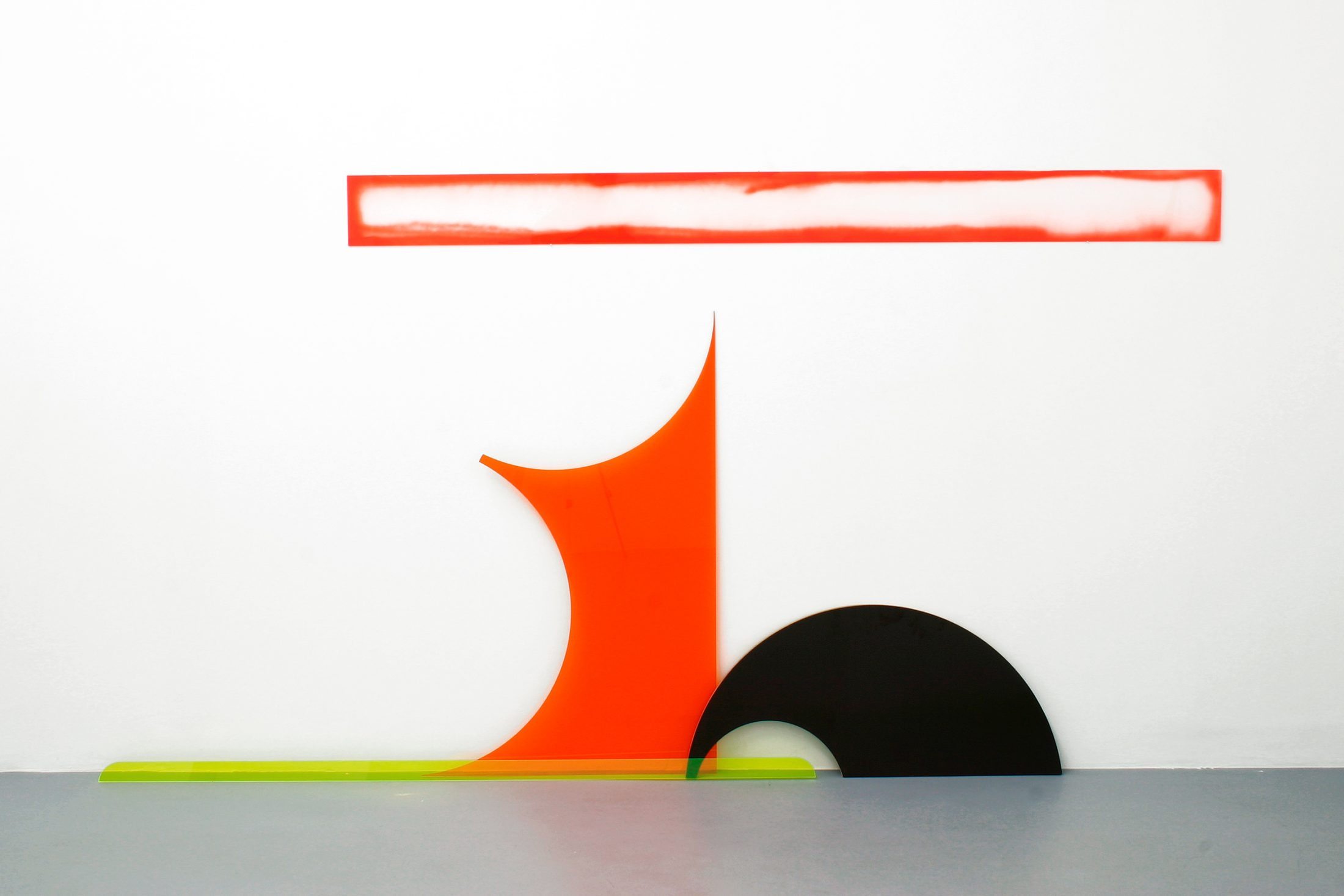 The works in the show are all based on the dimensions of windows in Tobias Rehberger’s studio.  Contrary to his earlier window works, they are not only design-proposals for windows to be installed on the wall but have light as an additional element. Each of the windows is equipped with its own spot light and a timer so that the spot will be lit during the exact hours when the sun hits the windows of the artists studio on a particular day, casting colored shadows on the gallery walls.

The exhibited works show an angle of this cluster of topics. A portrait gives you hints as to the ‘inside’ of a person. Perhaps the works in the show ask how much appearance reveals of a personality. Or how much external features reflect of an inner core.

The studio doors and windows are the most literal, conventional and purposefully classical works from this perspective. They follow the tradition of Dutch 17th century painting or portraits where windows or doors in the background open up onto the world and provide a perspective. It’s a bit like the artist inside the studio looking out of the window or, alternatively, people looking in from the outside in. Doors and windows usually focus and frame what can be seen through them. The artist designed the pieces to be like an idea of a blurred window or a blurred frame. Like a blurred focus or like a telescope with a blurred lens…

They are all the actual size of his studio windows and they are made so that they could replace the existing windows and doors. In a way they can also function as prostheses, in the sense that the ‘studio windows’ could even be properly functional in the event of a disaster.

Rehberger’s repertoire of forms draws on what the art historian Norman Bryson once defined as the slow time of material culture – of man made objects the surfaces of which change with new technologies and fashions, but the functions of which remain fundamentally the same: a chair, a vessel, a light, a room with a view.

His objects and environments not only draw on a repertoire of daily use; they are also produced to mimic the shiny perfection of the manufactured. He turns to industrial processes to make objects that look as if they are mass produced, part of a continuum, the zone of everyday mass culture. However, their idiosyncrasies in terms of colour, size, function or location make us look again. These things or environments don’t fit in. They are works of art that propose new rules of engagement not only in their internal dynamics, but also for everything and everyone in their vicinity.  Furthermore, Rehberger is careful not to add anything extraneous to the world, often choosing to amplify – or like the Situationists, detourn – what’s there already. 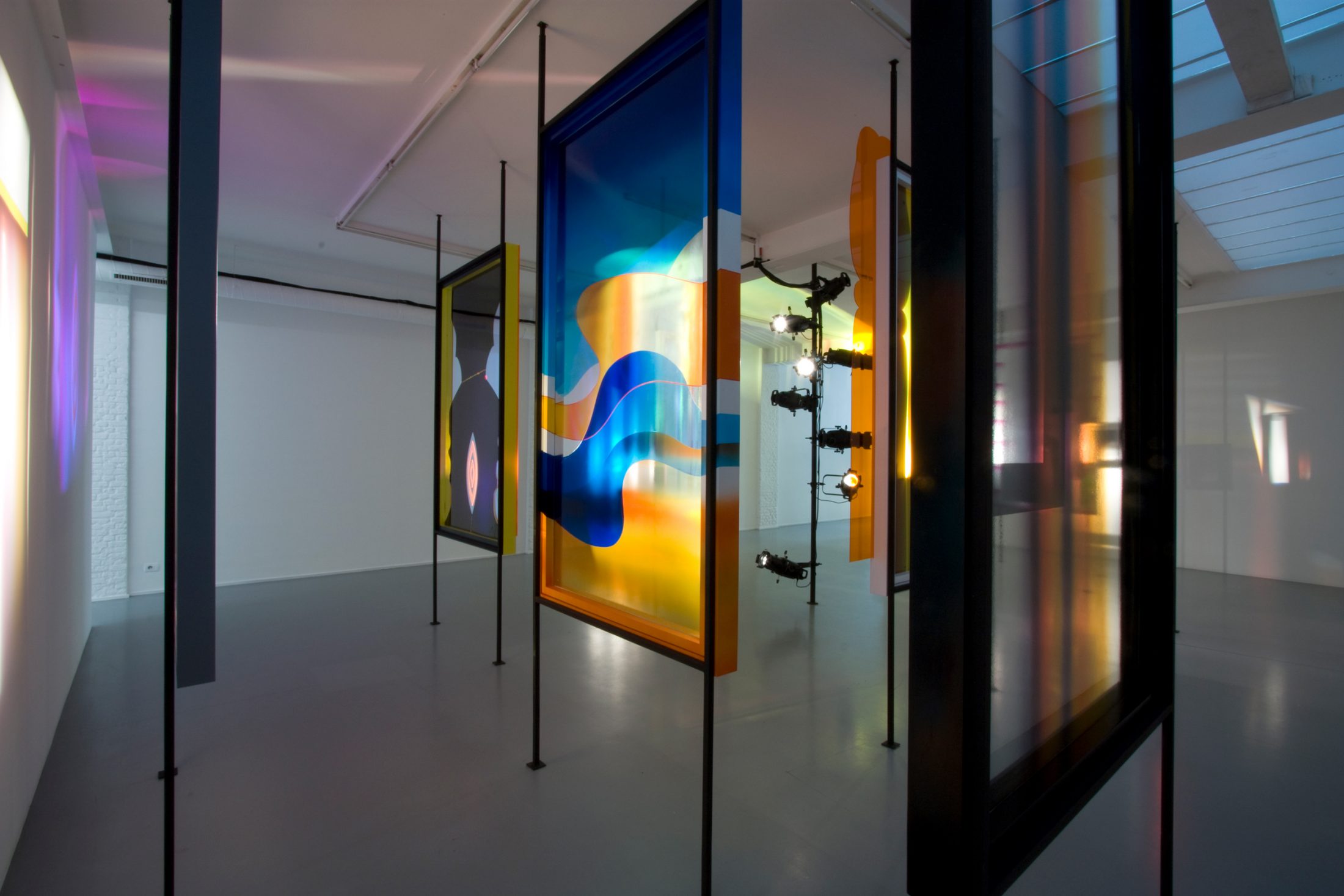 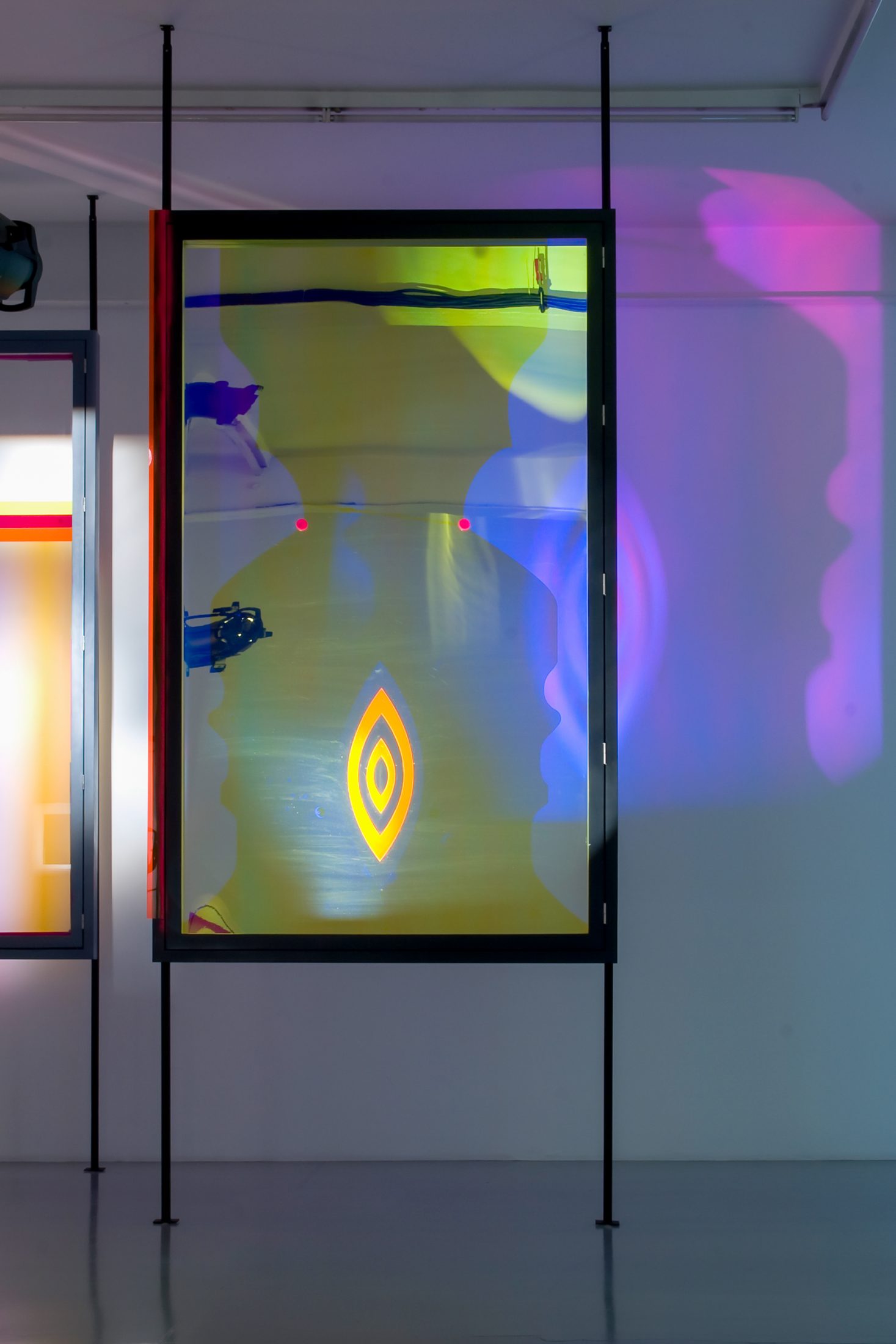 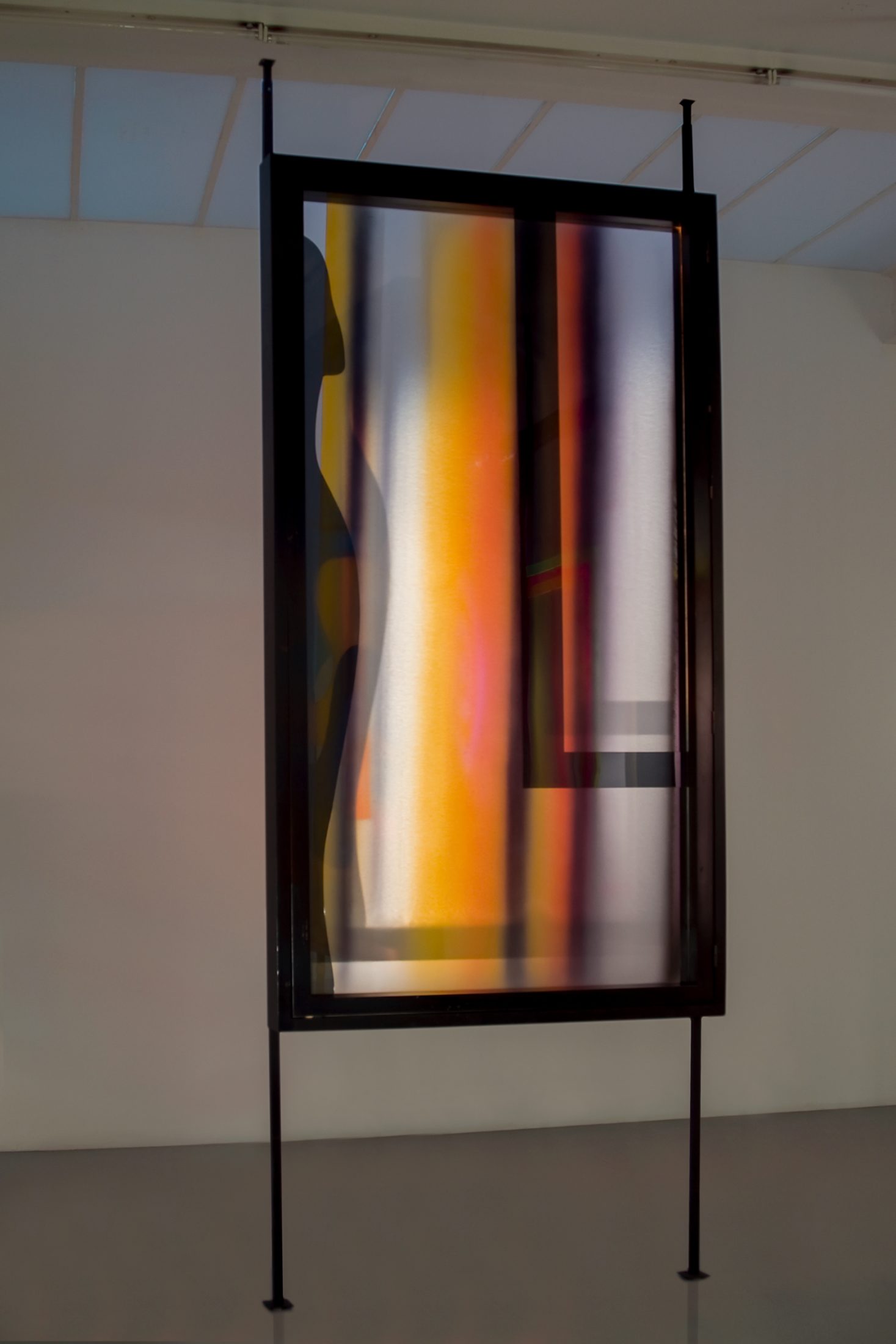 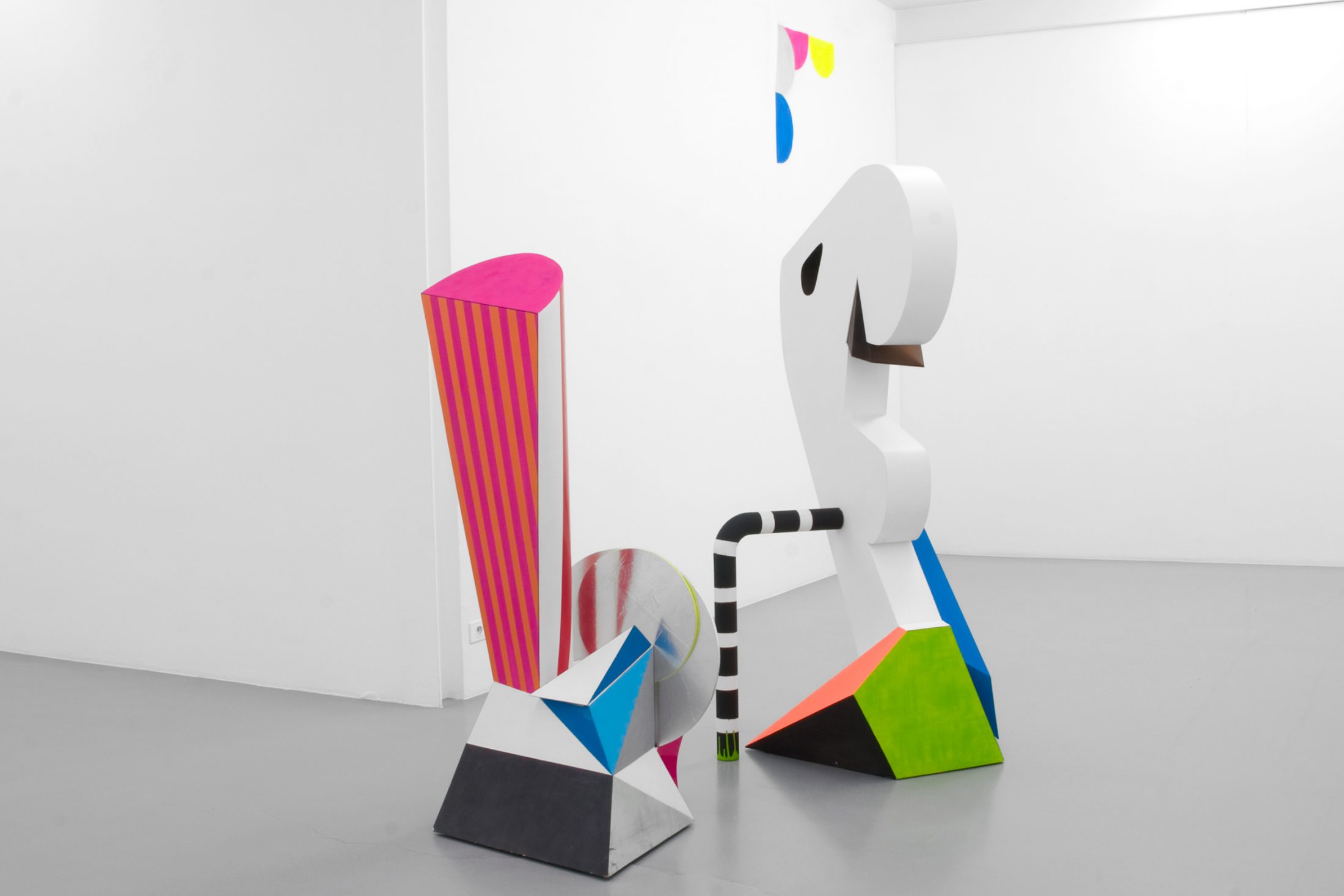 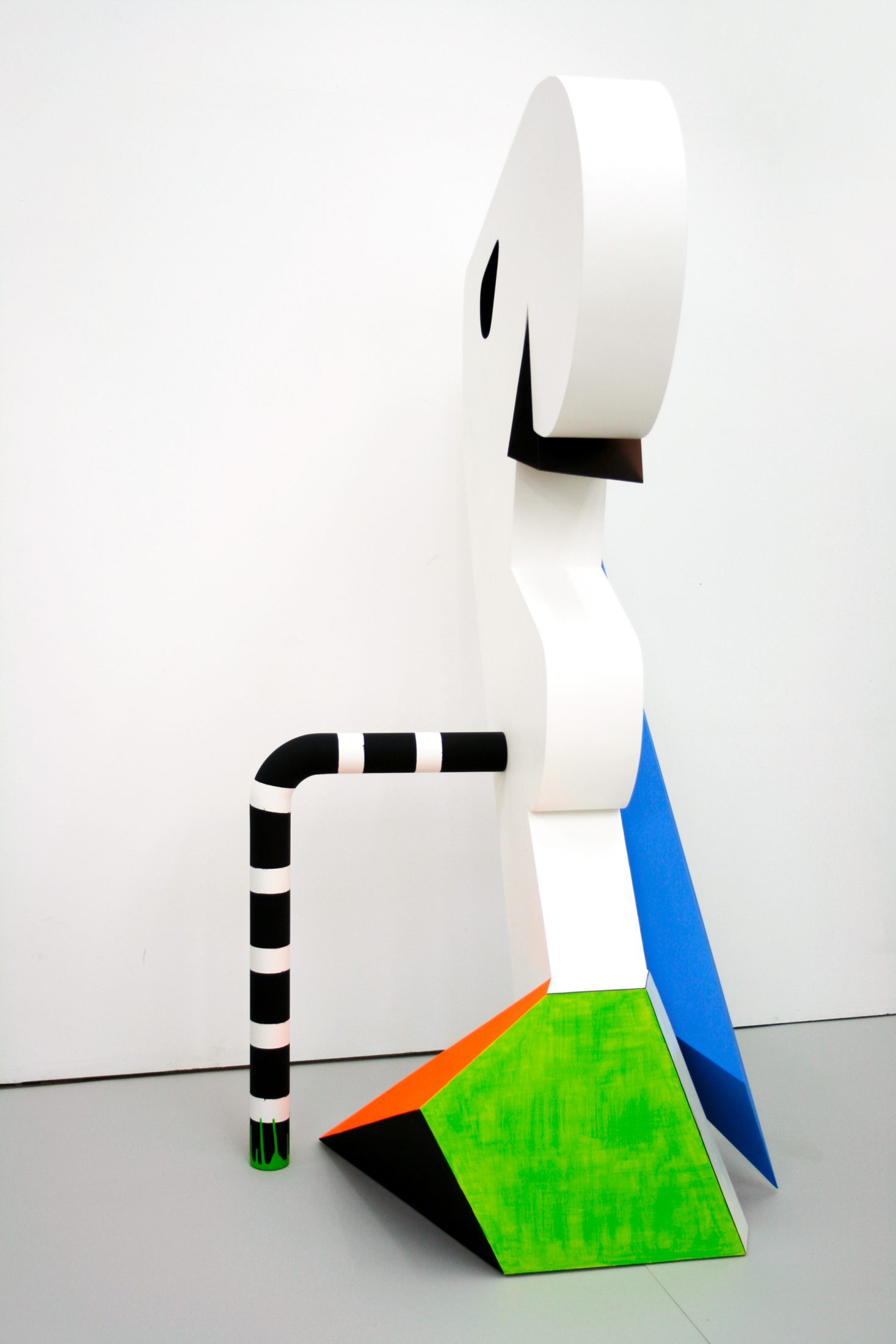 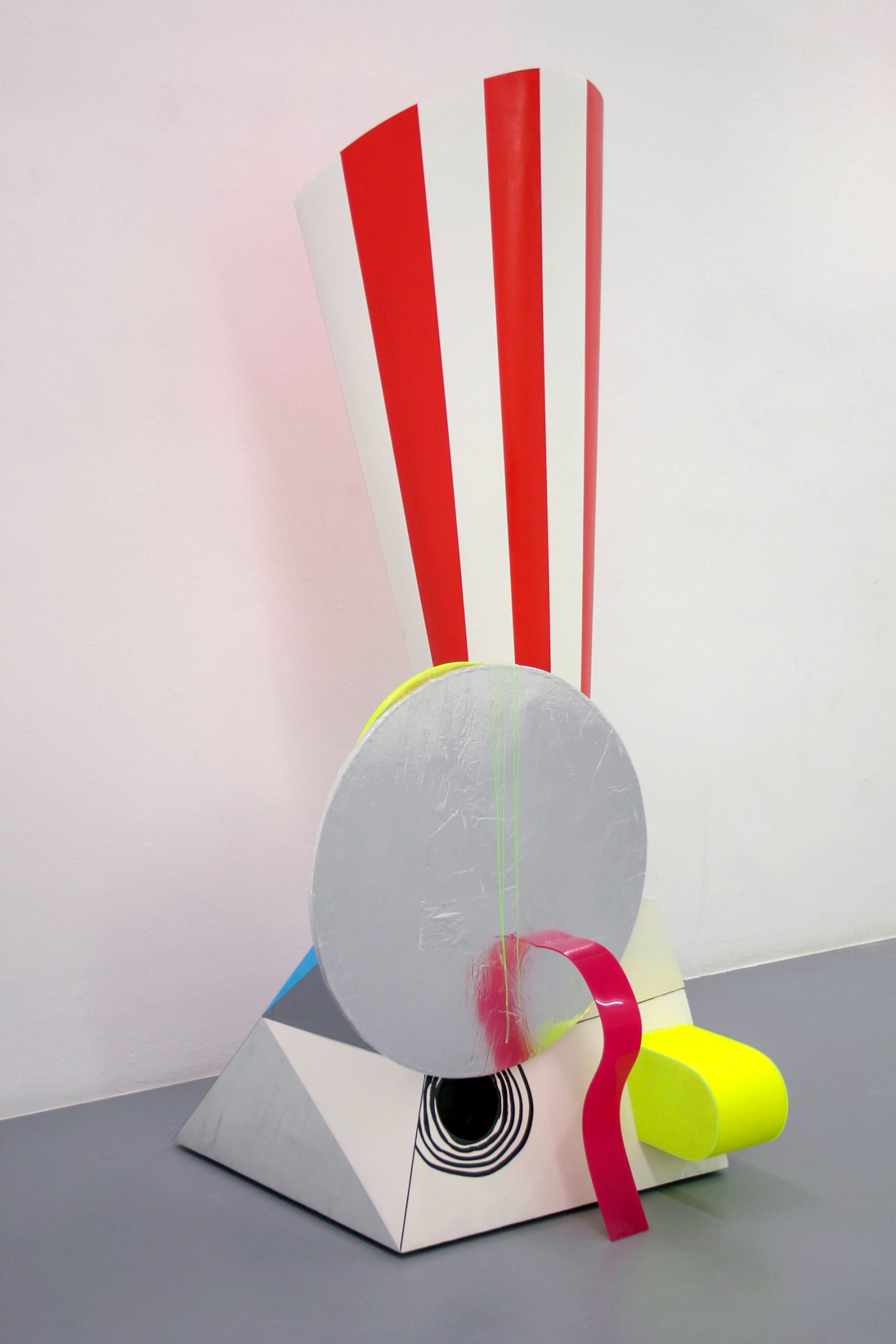 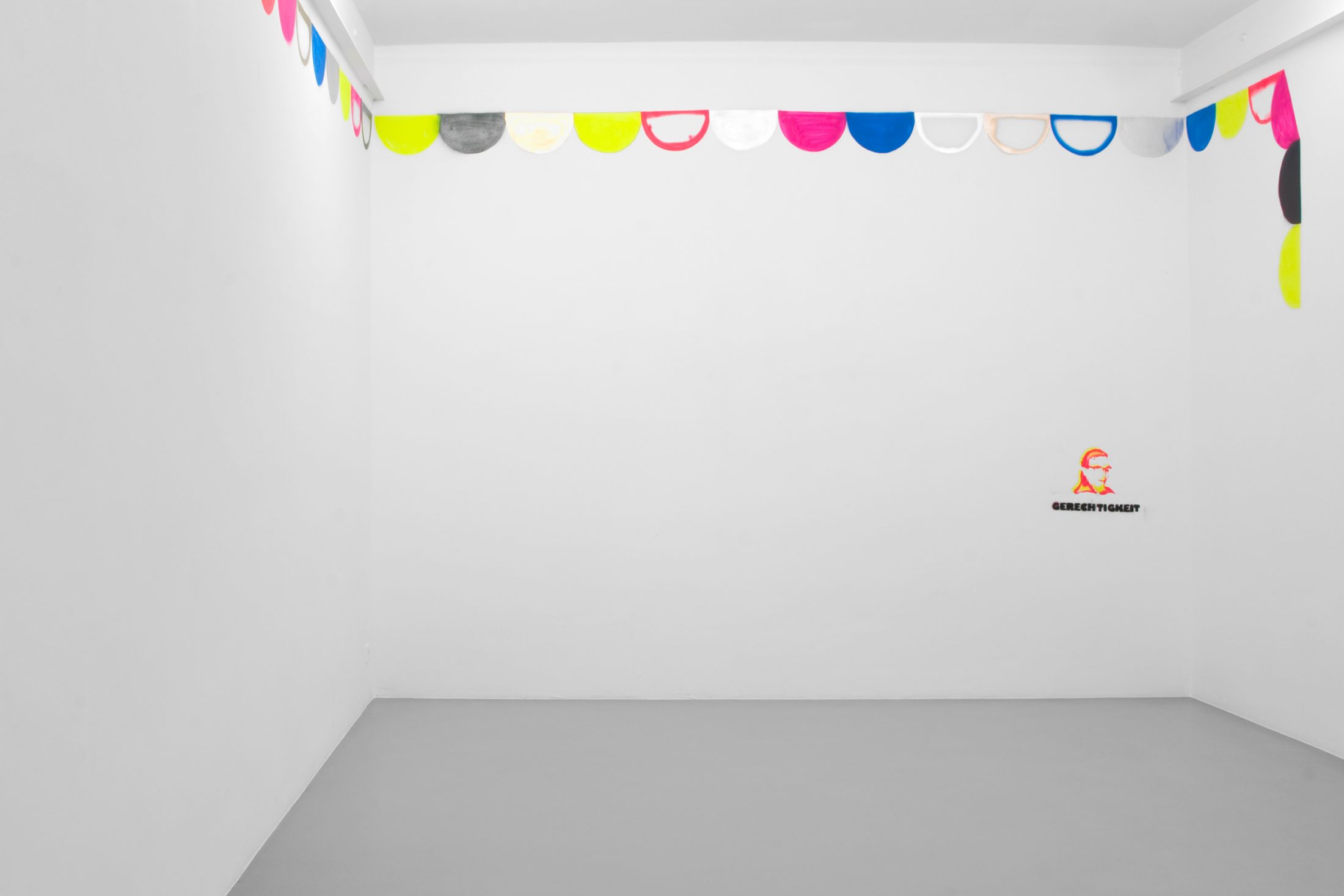 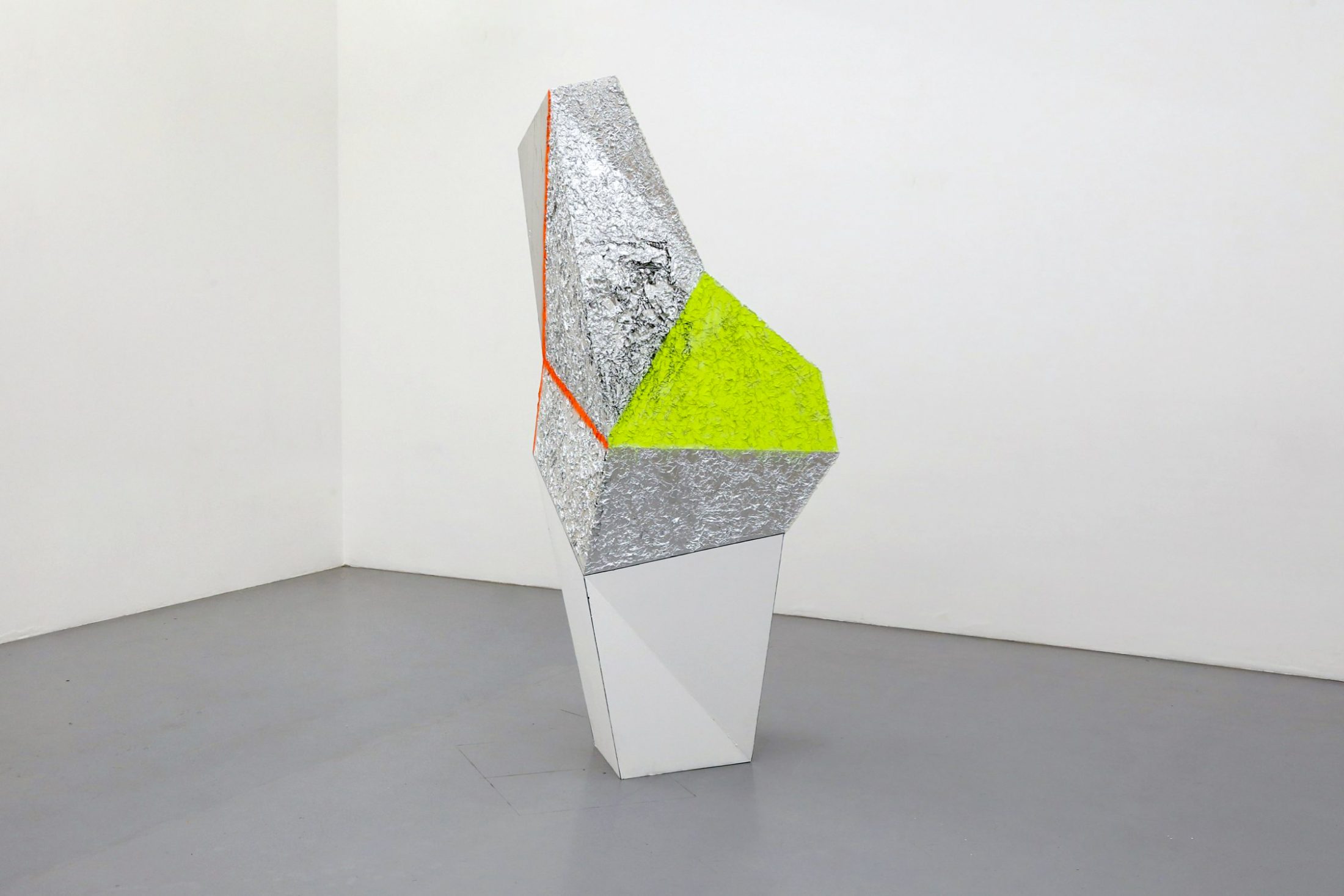