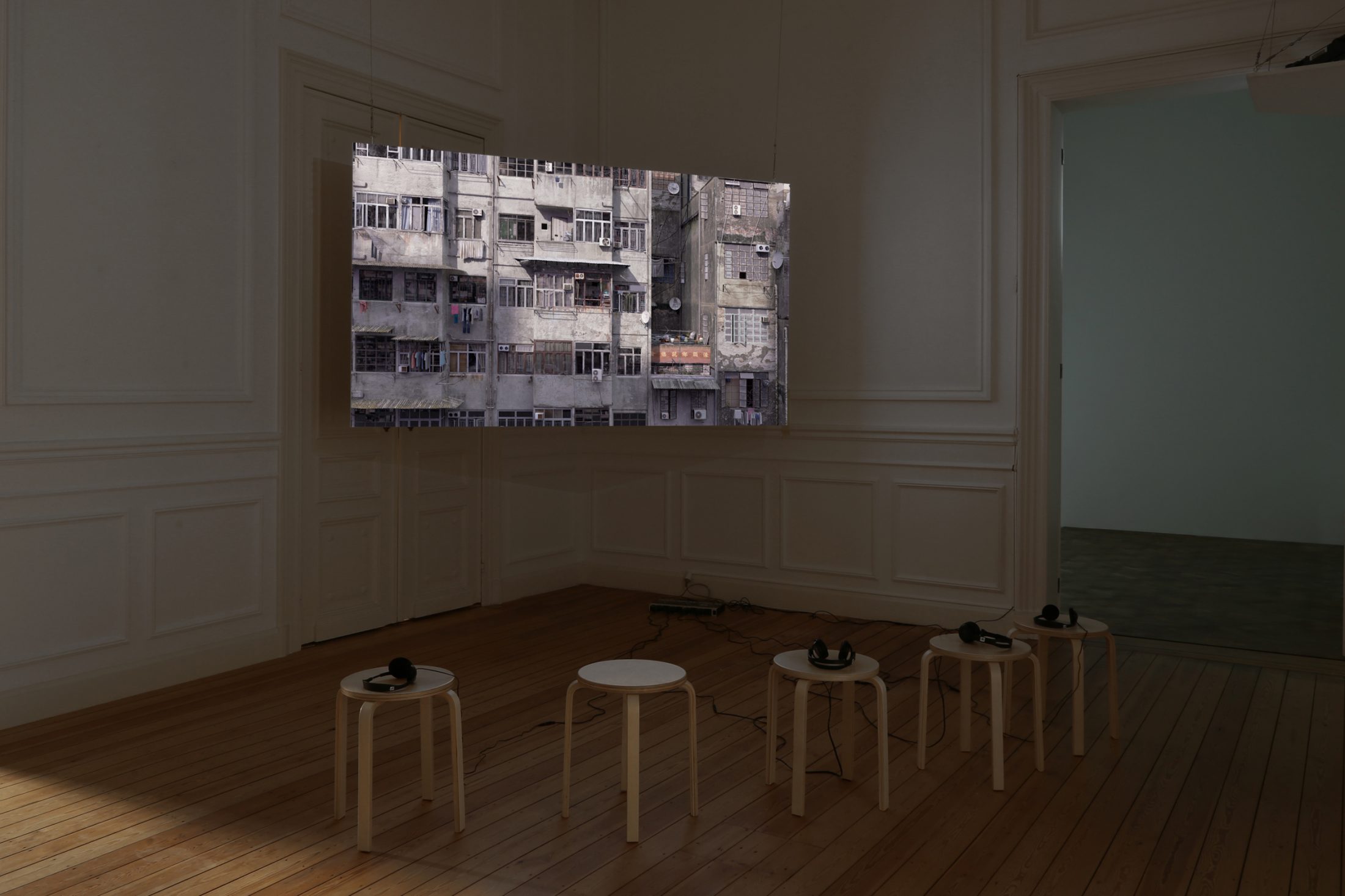 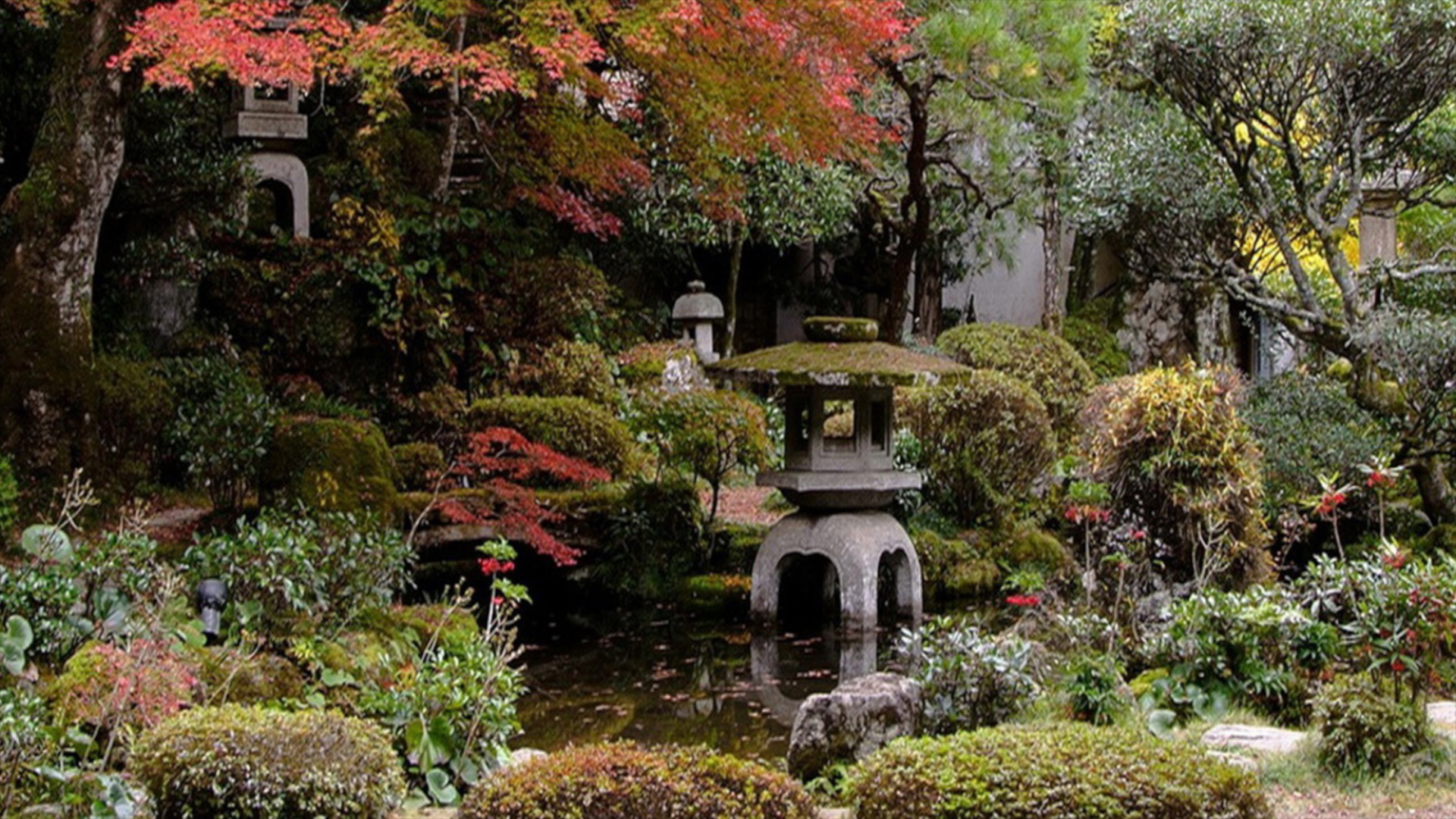 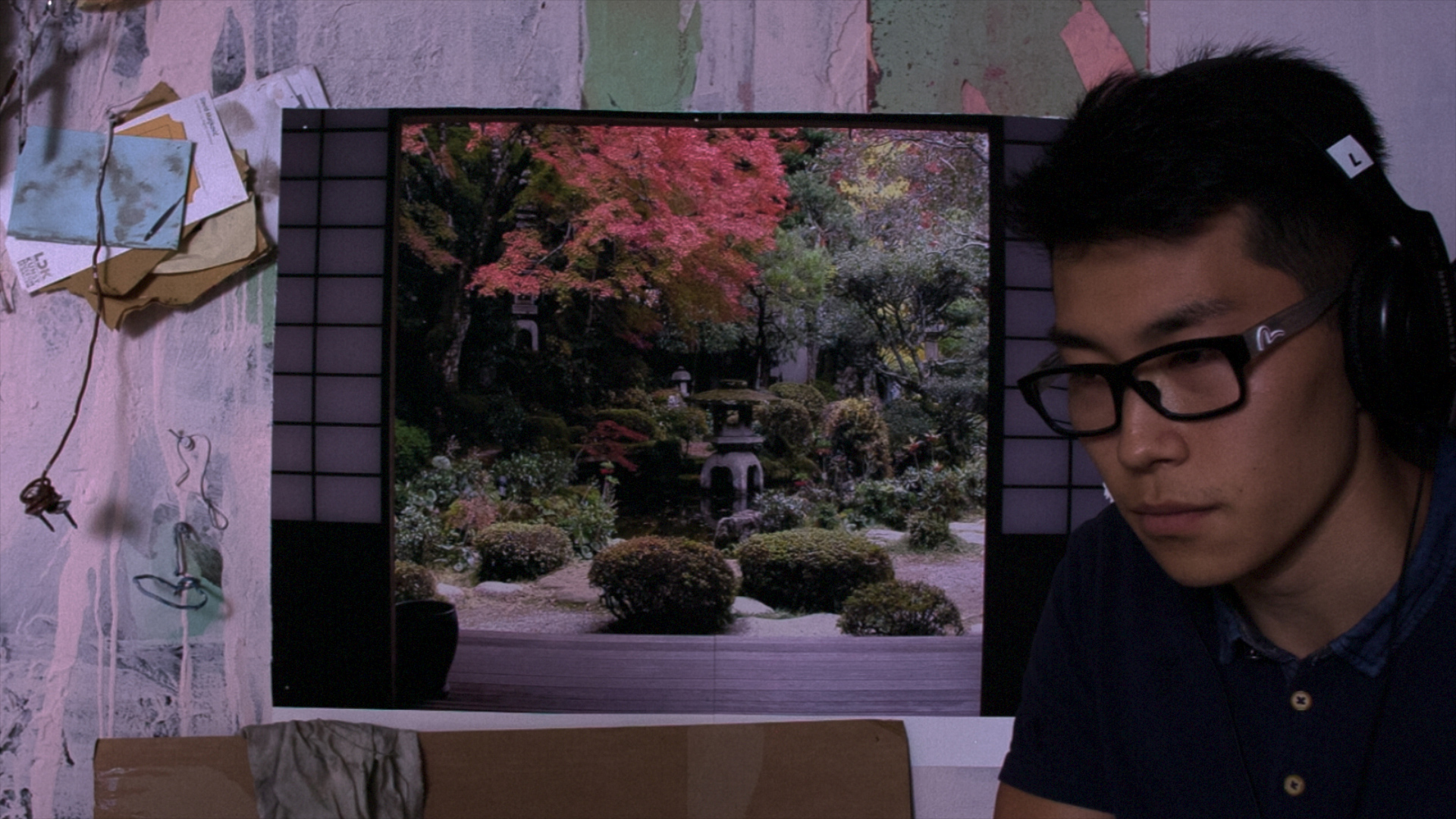 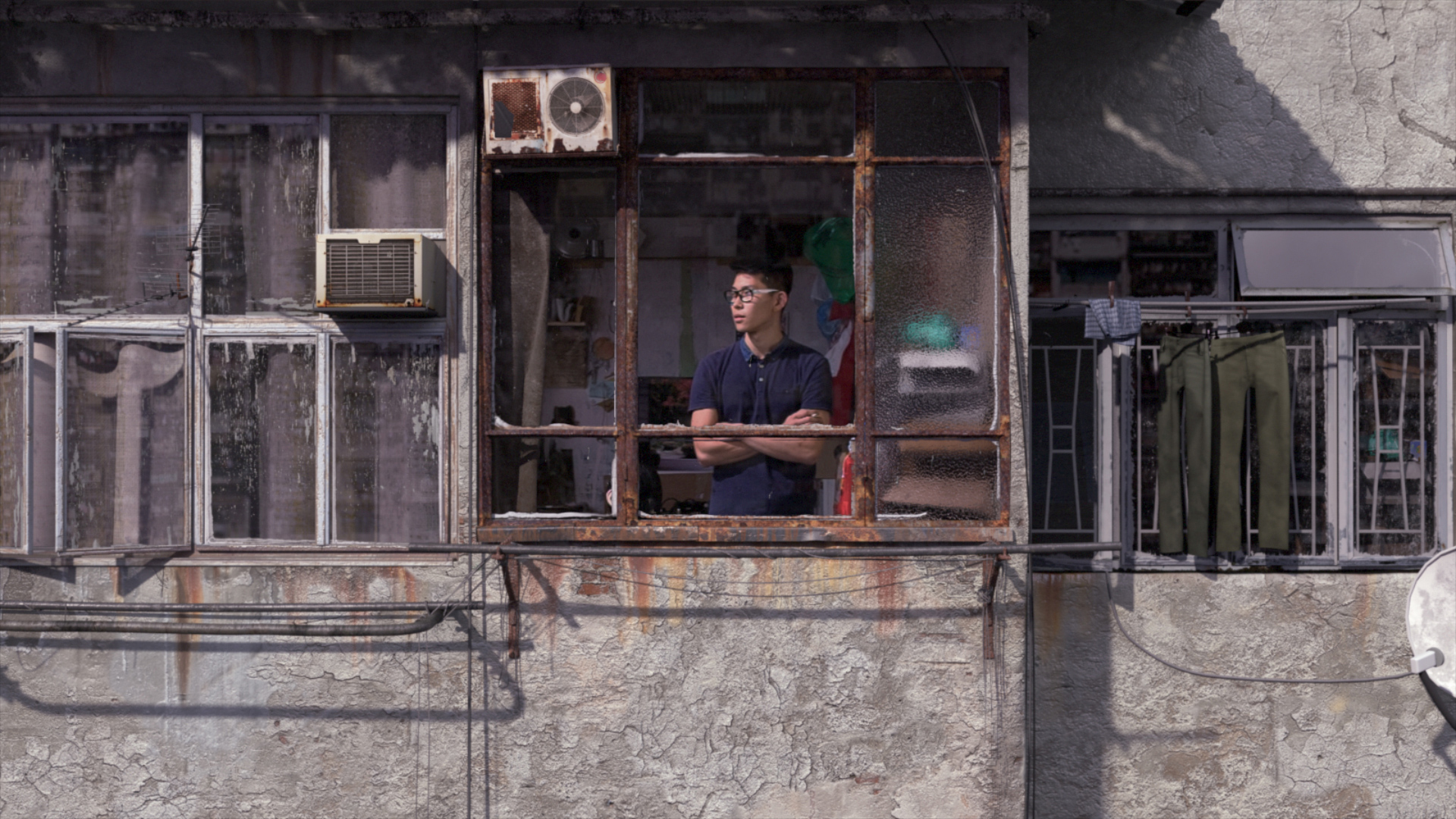 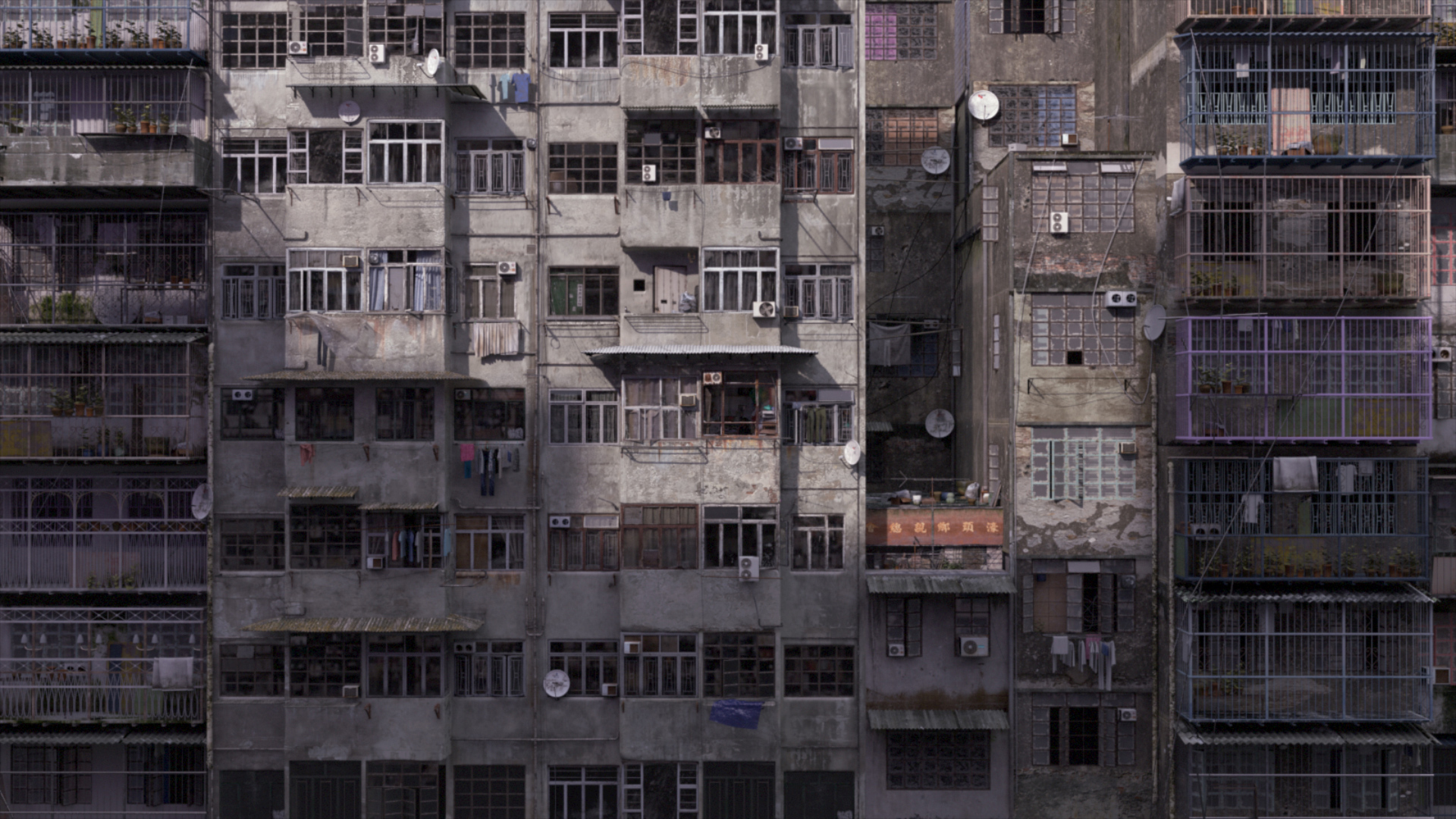 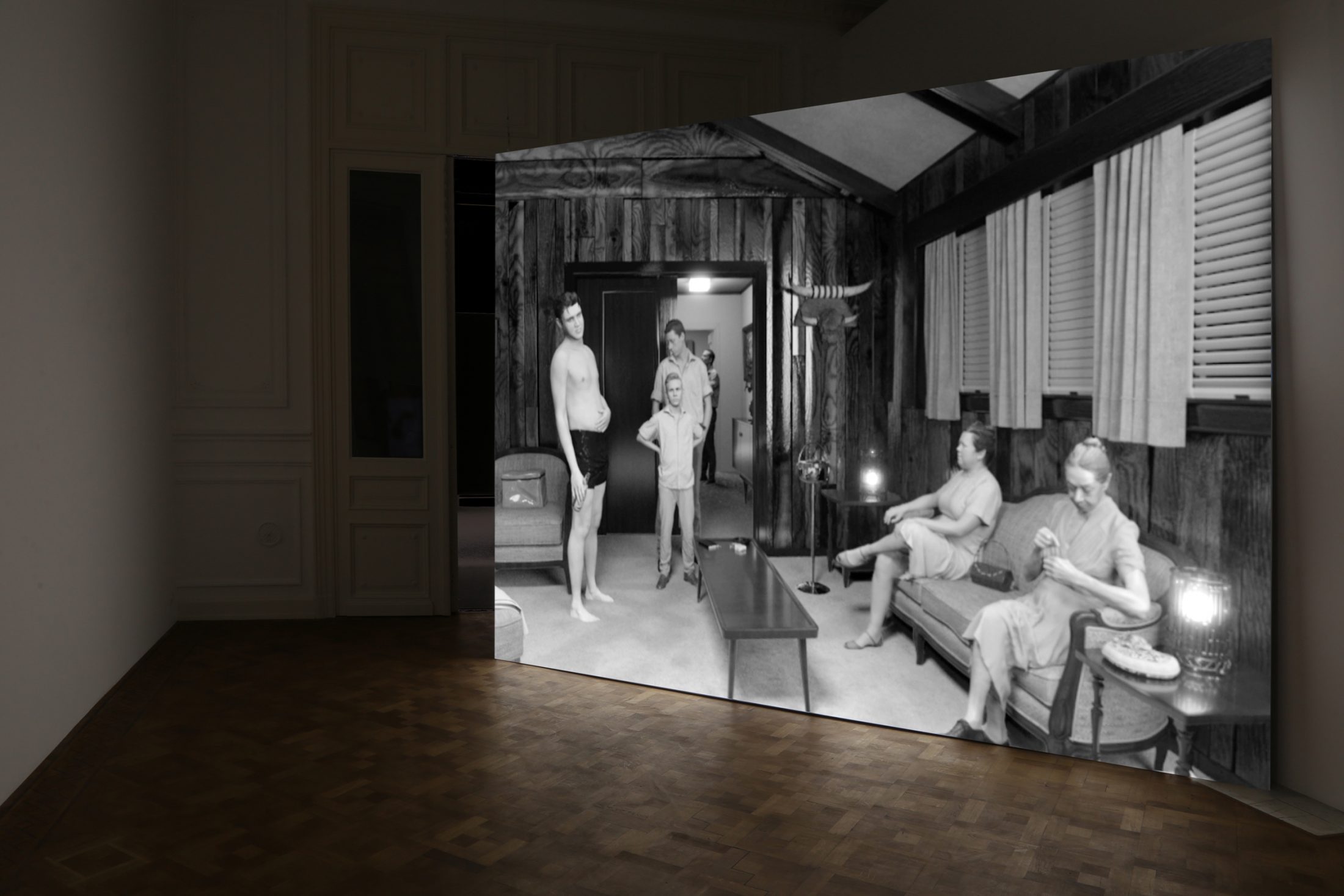 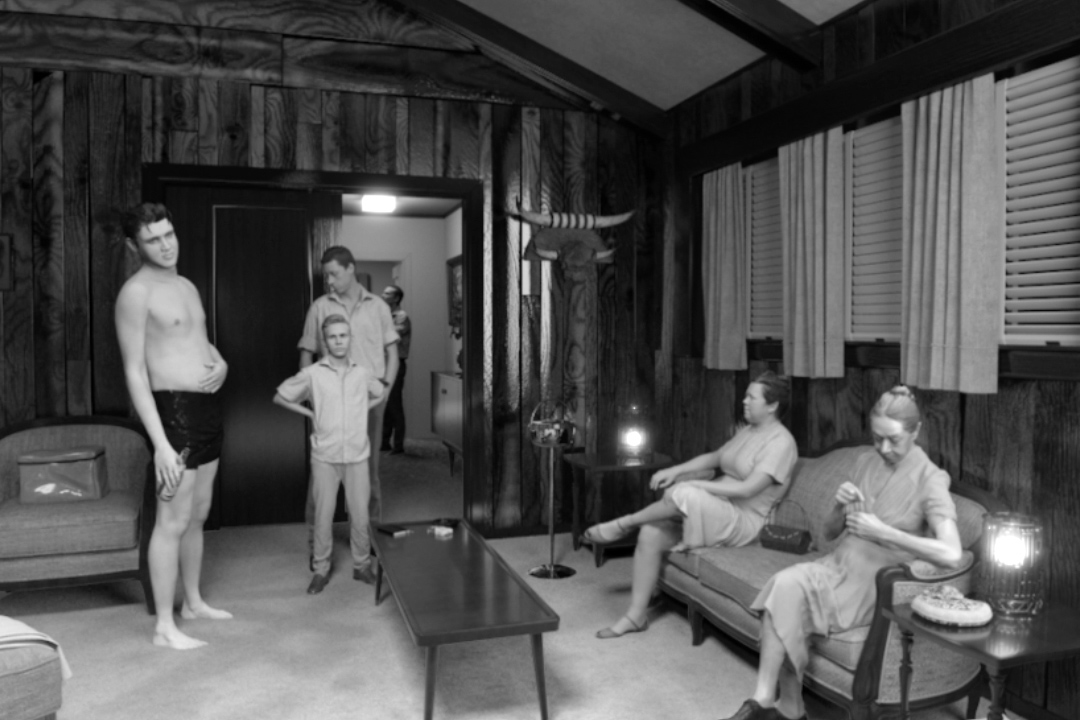 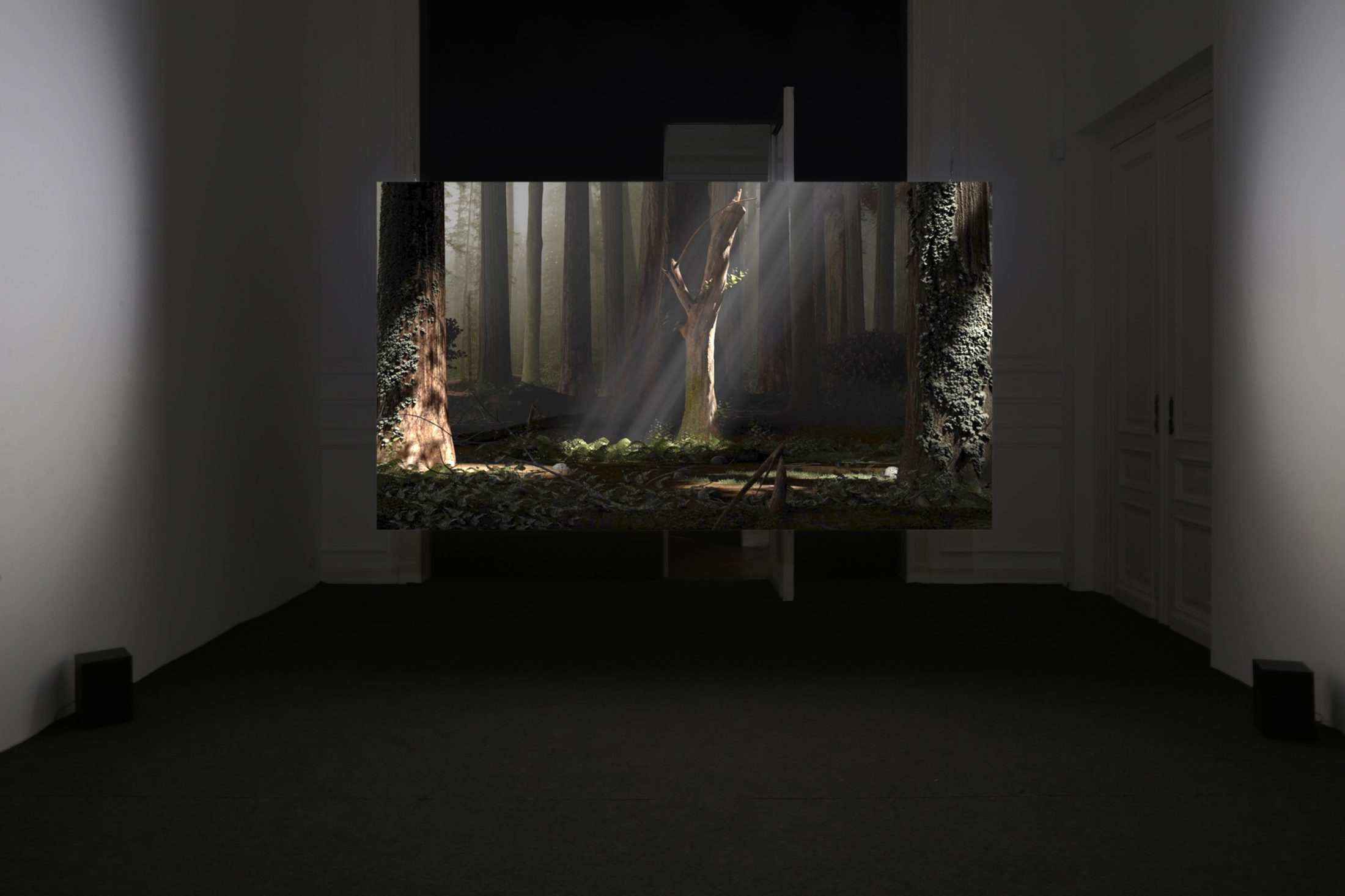 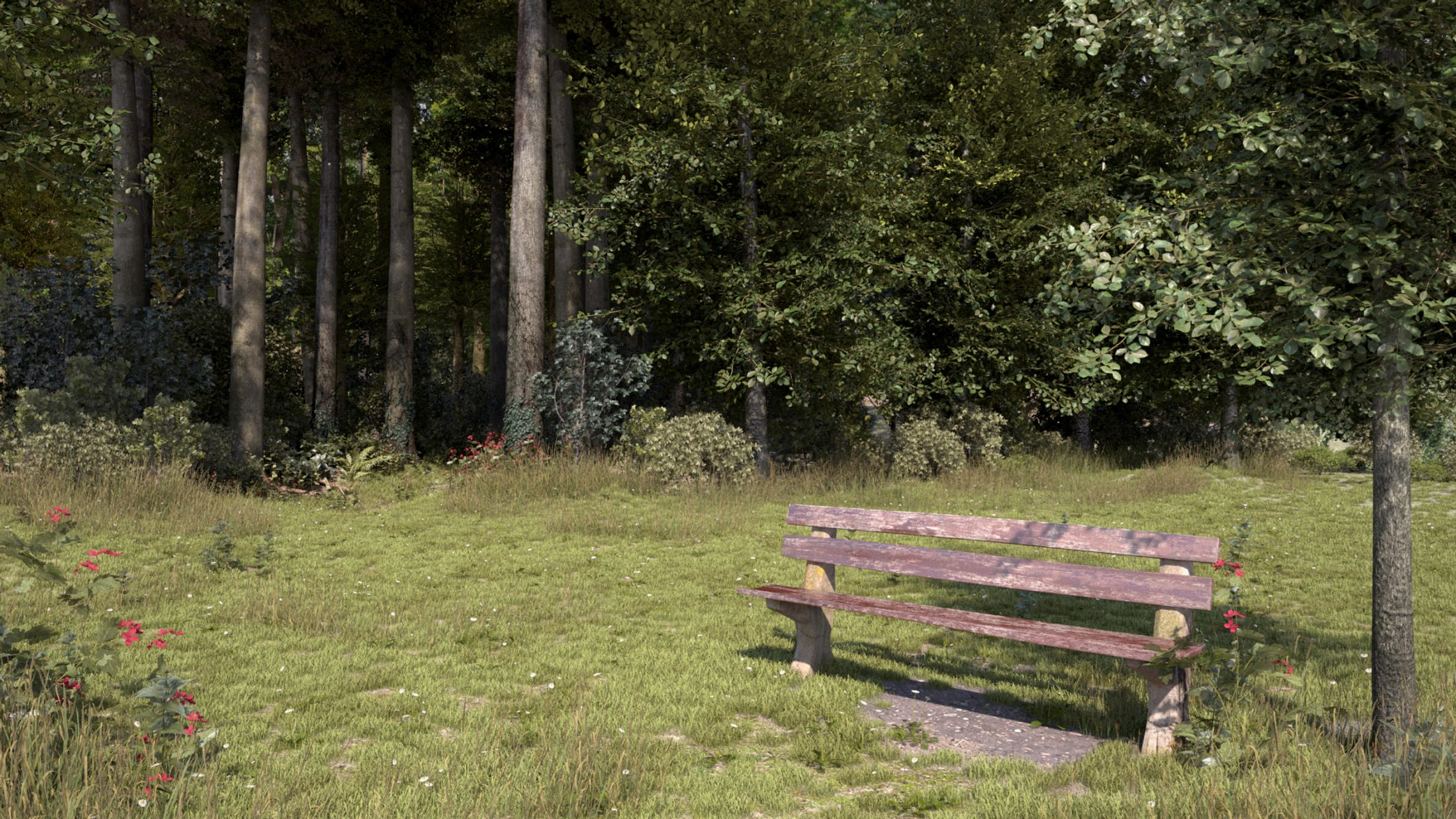 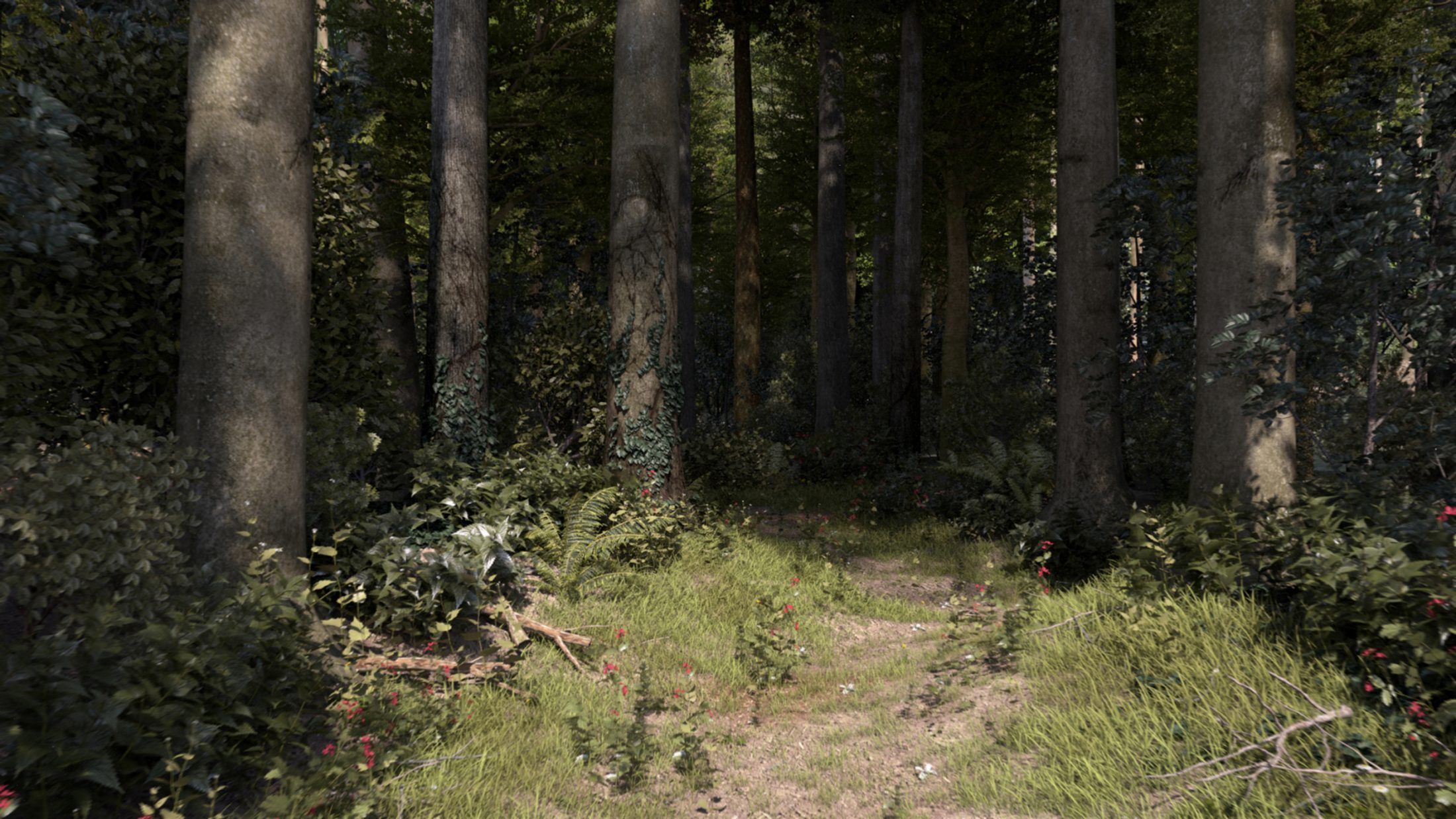 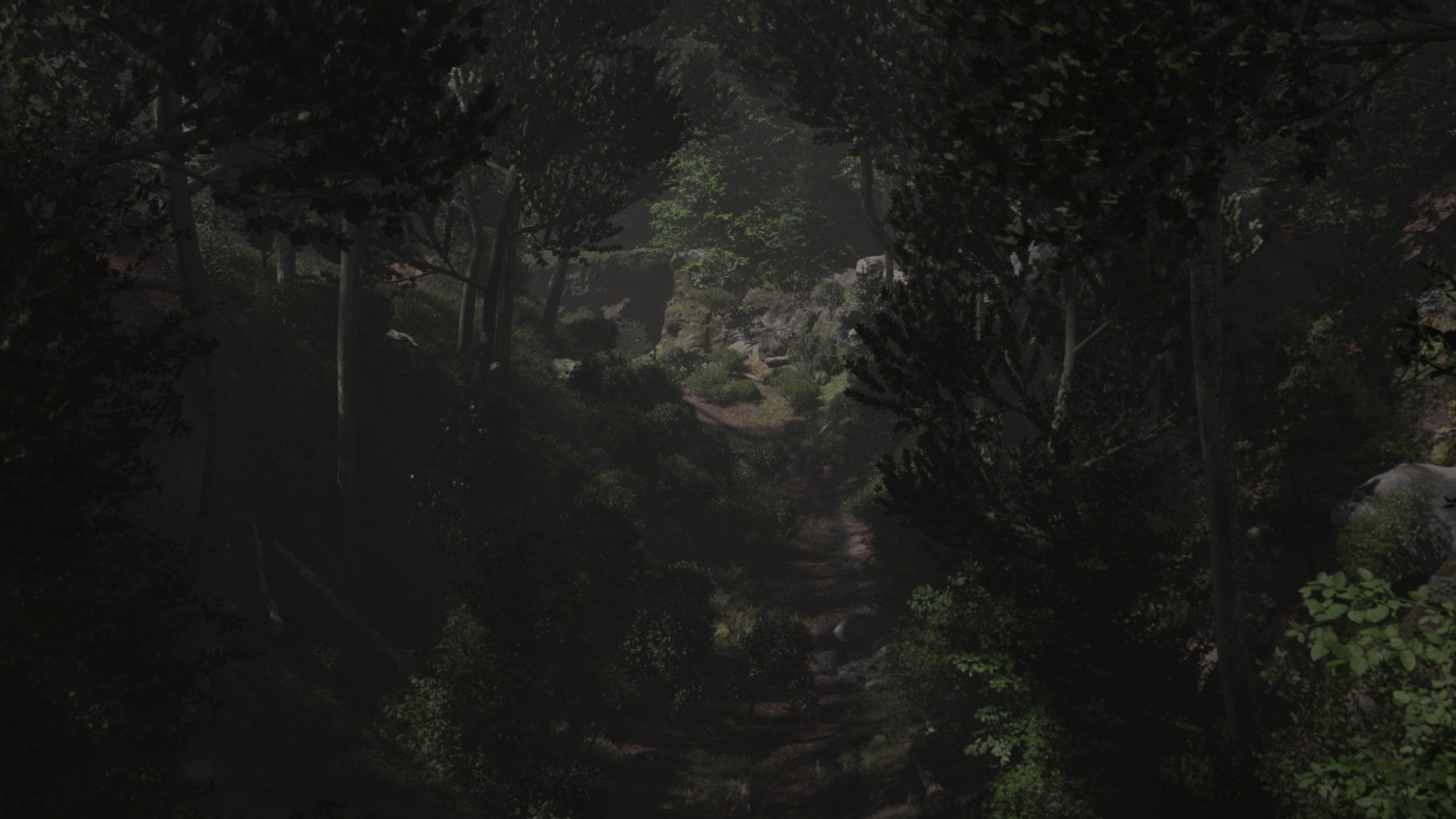 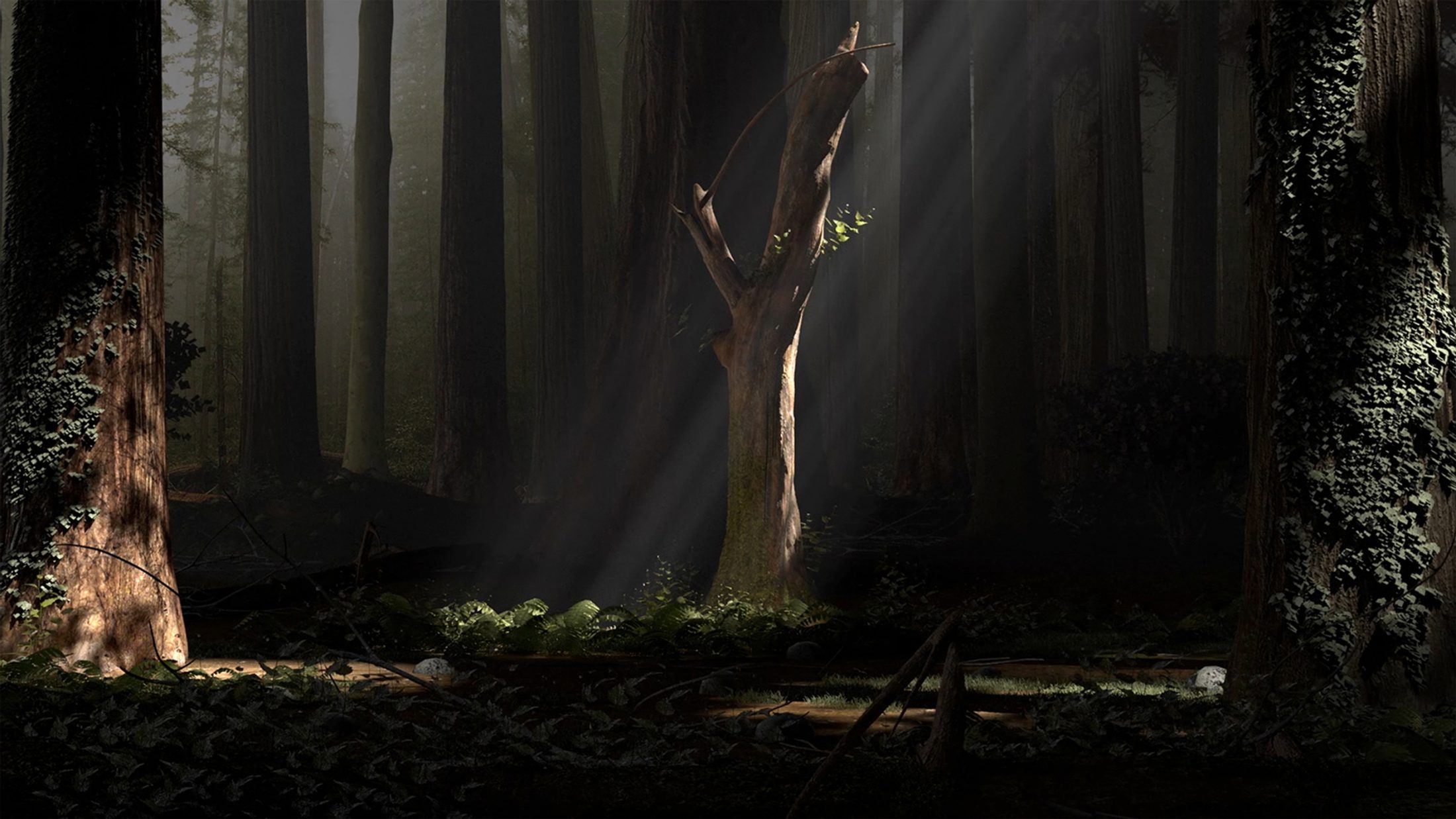 Radio Piece (Hong Kong) is an audiovisual installation that positions the viewer on the intersection of a mental and a physical space. It mainly uses images from Hong Kong’s notorious Kowloon Walled City. In the ’90, the city contained a demography, almost inhumane, of more than 30,000 within its 3 hectares. It has been now taken down.

The work depicts itself as an uninterrupted backtracking camera, smoothly moving from one type of space to another. Its primary angle focuses on the image of a zen garden, slowly opening into a cramped room to finally expand into the view of the Walled City of Kowloon. On the other hand, the sound conveys the experience of those same spaces as an inner experiment, inside the head of the listener, or to be more precise : inside the headphones. The sound of Radio Piece (Hong Kong) in fact uses binaural recording, a method of recording that uses two microphones, arranged with the intent to create a three dimensional acoustic experience for the listener. It results as an uncanny presence of fictional noises of people and events taking place inside the room.

In Radio Piece (Hong Kong), all seems directed to appear like a rhythmical sounds sequence which is growing in an uninterrupted and sovereign space . But in reality, space, living-conditions, mental space and virtual space have been mixed up to cast doubt onto the coherence of perception, a critical point of view of mind colonisation as real estate.

The aim is to demonstrate that real places and real ressources are becoming more and more unlikely. Mental space has today become the new real estate. And literally considered, a mental space might be the space running from ear to ear, where the sense of hearing can be understood as a dividing wall. Also, we might now be expecting for the emergence of a market of mental real estate that develops spaces between the ears. A profitable market which offers unlimited possibilities of expansion.

Silent, black and white projection based on a photograph found in a book that marks for Elvis Presley – then aged 21 – the transition from ordinary life to superstardom. During one week of 1956, Alfred Wertheimer portrayed a young man who generously returns with an incredible calm every shot of the camera, allowing the photographer to come very close and feel at ease with a ‘body’ on the precipice of life-changing fame. It is at this intersection that KING has been conceived.

In this animation (3D), the reconstructed head and body of Elvis have been textured using fragments of hundreds original photographs of Elvis’ skin and features. This process allows the camera to come into an intimate contact with one of the world most charismatic figures. This reconstructed picture has been however produced in a world without any lens, but with the only presence of a virtual lens. The use of this “technic” creates a confrontation with the photograph taken in a world where a lens in front of Elvis still equalled the proximity to an holy body.

A world without lenses is a world of pure concepts — severed from the world — and where uncontrollable things happen. It is the world of control which we are presently moving into. And that means living with the heavy burden of having to set-up everything in every image, thus generating an image that is now a memory rather than a testimony. The changes that lay ahead are not limited to image technology. There will be an increasing distancing, away from that hard surface that proximity sometimes is.

Distance means power, proximity means being fragile. The photographic apparatus that is used to give evidence – seemingly without ideologies – is being reclaimed by those ideologies, and this is a frightening prospect, because it will radically affect observation, and radicalise our vision.

It is almost impossible to ignore the changes that took place between 1950’s modernity — a time (the time of youthful Elvis) in which the belief that everything the camera told us was true existed — and todays reconstruction of that picture : the net result of a society of control. ’Interface’ seems to be todays keyword, a provider of just enough freedom, or a means of just enough control. Interface determines where the fences stand. Fences beyond which we have no access.

The conservatism that speaks from the composition (the dark interior, people and attributes) and half naked freshness that speaks from young Elvis have got me interested. I tried to show the relation between control and conservatism, with Elvis serving as the protective saint, once again.

Most – if not all – of my work is marked by the use of new technologies against control (for a change) instead of increasing control. The paradox seems to be that I use precisely those technological tools that I oppose.

The idea and first preparation for this work date back seventeen years (1996) when I came across a particular piece of relaxation music.

It was originally composed in the mid 1980’s by Eric Breton whose therapeutic music would take away stress, and ultimately induce sleep. I considered that making a piece that could make people fall asleep was not a bad thing at all.

Being purpose driven sounds, the aural images are so predictable and ‘locked in’ that they reminded me of people with stubborn ideas who are unable to give them up. One particular interest lies in the dispassionate, yet cinematic character of the synthesizer, suggestive of ‘generic’ images anyone could imagine, of places in a dark and tranquil forest. The decision not to film, but to use very advanced computer images reflect the search for a space that is beyond the specific, that wants to be generic: it could be many places, but none in particular.

After a three-year production period, a continuous camera movement makes a journey starting in a park, going into a dark European forest, then into an Amazonian jungle and finally exiting the forest revealing a nondescript suburban plain. At this moment of musical finale, disenchantment and catharsis ‘share the podium’ while the camera is taken up into ascension, making it impossible to conclude a final image.