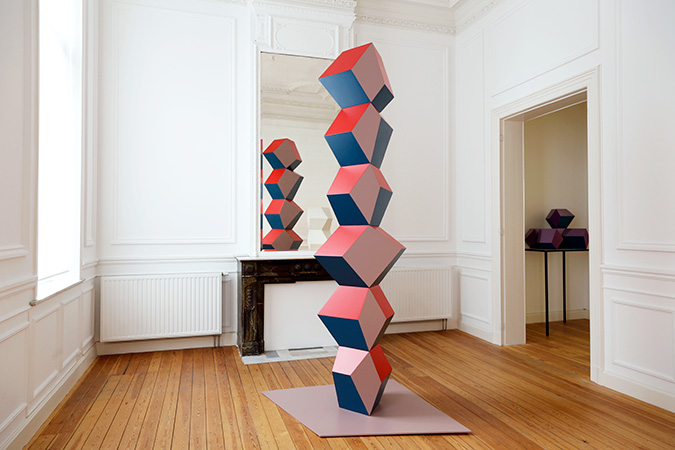 Angela Bulloch is interested in systems that structure social behaviour. Her functional sculptures, light and sound works play with the ways in which we construct and interpret different types of information, be it related to art, literature, cinema, music, or issues of ownership and authorship. Her multi-disciplinary installations marry conceptual rigour with sensuousness and humour. Walking through a room triggers canned laughter; a video screening is activated by a person sitting on a cushioned bench opposite; a wall-mounted sequence of coloured spheres switches on each time a person passes a particular point.

Since the early 2000s Bulloch has been creating increasingly ambitious sculptural installations made from ‘pixel boxes’. Developed by Bulloch with engineers as a prototype in the late 1990s, the pixel box is made up of luminous tubes and an electronic control unit housed within an industrially produced wooden or metal casing. Elemental units within an ever-expanding body of work, the pixel boxes form the basis of a variety of structures, from towers and floors to monumental screens which translate scenes from cinema, television or entirely abstract sequences as mesmerising colour compositions that change before the viewer.

In recent years Bulloch has realised a number of important architectural commissions. Invited to create a work for the Tate Britain pier designed by Marks Barfied Architects, on the Thames at Millbank, she created a perforated light work embedded into the pier’s structure, which pulses and changes colours with the rise and fall of the tide.

Born in Ontario, Canada in 1965, of British parents, Angela Bulloch graduated in Fine Art from Goldsmiths College, University of London in 1988. Since that time, she has exhibited in numerous exhibitions in Europe and internationally. Solo exhibitions include Vehicles, Le Consortium, Dijon (1998); Angela Bulloch. Z-Point, Kunsthaus Glarus (2002), Matrix 206: macromatrix for your pleasure at Berkeley Art Museum, University of California (2003). Her work was recently on show in the group exhibition Extreme Abstraction at the Albright-Knox Art Gallery, Buffalo. In 1997, Bulloch was short-listed for the Turner Prize. She has been nominated for the 2005 Preis der Nationalgalerie für junge Kunst at the Hamburger Bahnhof in Berlin. The artist lives and works in Berlin.

↓ Macro World: One Hour³ and Canned

With Macro World Angela Bulloch extends her ongoing investigation of the pixel as a threshold between virtual and concrete presence. Thus, the centrepiece was a 2.5 x 3.5 meter pixel wall, comprising thirty-five cubical units (DMX modules). When activated, this became a luminous, undulating, pastel grid. The resultant color patterns seemed to correspond to an ambient sound track (David Lowes BBC World: the Music), but this was, in fact, simply an overlay of independent visual and musical sequence. To offset the pixel wall, the artist constructed a raised floor of Euro palettes and a ceiling of plastic mirror tiles. To one side of the constructed floor stood two Micro World, single-pixel boxes.

Although not visually apparent, the source material or content for the pixel walls light patterns was television, namely BBC Worlds World News, Global Weather. This choice astutely registers an aspiration, however quixotic, to represent the world comprehensively, as a continuum. While television purports to be a universal medium, BBC World broadcasts non-stop, world-wide in an almost entirely uniform format. Weather reports, moreover, by definition show phenomena not as discrete events but as constantly shifting patterns within a global system.

More obvious is how Bulloch converted the gallery into a lounge or quasi-night club. The mirrors, mood lighting, music and dance floor together seemingly invite viewers to dance or at least hang out. Still, who would realistically expect to go clubbing in an art gallery? Bulloch left a clear path all around the raised dance floor. Viewers could walk either over it or around it. They thus had to choose between observation and participation, even if such a distinction is ultimately beside the point. The tension is akin to choosing to walk over Carl Andre’s plates or to knowing that man in metallic underpants could suddenly appear and start dancing of Felix Gonzalez-Torres light-ringed box. In these instances, use is inseparable from corporeal presence, even when the artists pit it against symbolic non-utility. Conversely, the pixel grid has a classically modernist function: what Rosalind Krauss called the annihilation of the figure. The dance floor simply brings figure and grid into contact. The stylistic affinities of Bullochs grid to Sarah Morris paintings or Liam Gillicks screens further suggest that it is not just an impressionistic raster, but also a terminal reduction of perspective that is, perspective as a means to rationalize and quantify physical space within an overarching political economy.

If the front of the pixel wall is clearly its display side, Bulloch also left enough room in the back for viewers to examine the equipment and connections. Of course, any formal consideration of this installation must include its technology. Each pixel box is a 50.7 cm cube containing three 14-watt, fluorescent tubes in the optical primary colors of red, green and blue. Individual dimmers regulate the voltage to each tube. In turn, a black box sends digital signals to each dimmer. These signals can adjust the tubes to 256 levels of brightness. Thus, the possible shades of color for each box total 2563 or 16,777,216: more than what the human eye can distinguish. Traditionally, color is supposed to be the most subjective aspect of vision and, thus, the most resistant to objectification. Bullochs pixel cubes, however, precisely calibrate colors within a closed system that makes any of the almost infinite number of possible sequences effortlessly replicable.

Although the pixel (short for picture element) is digital imageries building block, the basis of programmable color, it is a logical, not physical unit. Moreover, it is a product of digital information, not fundamental digital information per se. The materials through which a pixel can be made manifest are variable. As such, the pixel functions primarily as an abstract differential element within a paradigmatic code. This coded status does away with the indexicality of film and photochemical processes. (Before the digital revolution, some used to call photography a message without a code.) In comparison, pre-digital photography, with its basis in copy and contact, becomes relatively auratic. The aura, after all, is a metaphor for social relations, not a thing-in-itself. The writer Hans Dieter Huber recently posited a correspondence between Bullochs pixel works and the experiments of Edward Muybridge or Jules Etienne Marey. This comparison, however, is misleading because the pixel, unlike film, retains no direct connection to objective phenomena such as a thing or body in motion. The relation between pixel and image content instead approximates that between a phoneme and the definition of a word. In short, this relation, in its arbitrariness and abstraction, is Saussurian. The idea of instrumentalism, be it interactive sculpture or rules for social conduct, has long informed Bullochs oeuvre. If pixels or phonemes can be said to signify anything in themselves, that meaning is but one stratum in several layers of code. By isolating and enlarging a small sampling of TV pixels, Bulloch confronts viewers with the seemingly senseless underpinnings of mass communications that process that promises to produce the macro world.